Promoting greater flexibility through iterative and incremental delivery, Agile is essentially a set of values and principles for helping teams to make decisions. Many organisations will most likely have toyed with the idea of implementing Agile across their operations already, but few will have considered it within the context of strategy.

At Capgemini Invent, strategy is viewed as a set of choices to be made across the following interlinked domains; 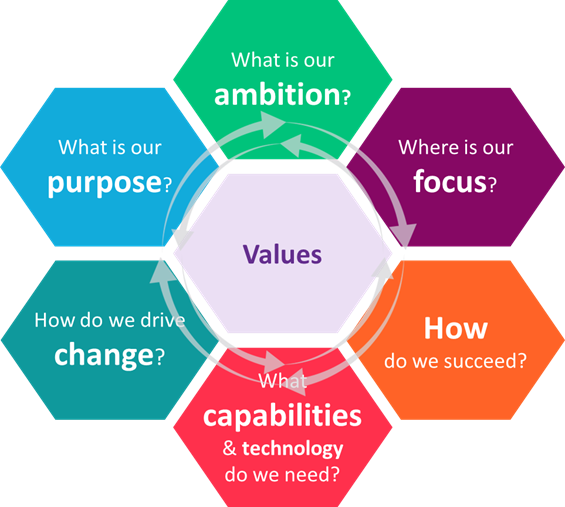 Choices in each of these areas work together to form the basis of how an organisation achieves its strategic objectives.

To many, the use of an approach rooted in software development may seem like a poor fit for the world of strategy. However, given that Agile principles emerged from a history of IT projects plagued by continuously changing requirements, perhaps Agile is the very mindset from which strategists should draw their aspiration. According to Fernando: “Strategy is the ideal mechanism, through which to create agility, given its Janus-faced role of both facing out towards the market and in towards the organisation.”

The paragraphs below will not look at how to approach implementing strategy using Agile sprints. Instead, they will focus on several Agile values, and how they can successfully be applied to the process of strategy development:

1. Responding to change over following a plan

“If you fail to plan, you are planning to fail”, possibly Benjamin Franklin’s most famous quote, and no doubt one that most strategists have either heard.

The act of planning itself is a key operational activity and one that all businesses must carry out, however it would be wrong to assume that having a plan is the same as having a strategy.

Planning is centred around affordability and reducing risk; it focusses on the initiatives which fit the company’s resources. Strategy, on the other hand, is about making difficult choices for an uncertain future, it’s about placing bets on where to play and how to win.

Given the uncertainty that surrounds most organisation’s futures, it’s unsurprising that some of the choices they make, don’t work out exactly as planned. This, however, is exactly why ‘following a plan’ can become so dangerous, because when plans don’t work as expected, organisations need to adapt quickly to change.

According to a Forbes article, within the last four decades Virgin company has become one of the most successful businesses in spinning its brand and expand into multiple industries. The group has encountered many failures, particularly in the mid-90s with for instance Virgin Cosmetics, Brides or even Cola. However, the company has throughout the years managed to quickly drop the brands that did not work, not sticking to a rigid success plan for a Virgin product or service.

Due to the uncertainty of the future organisation’s must continuously look to evolve and adapt their strategies, rather than stubbornly sticking to “the plan”.

2. Individuals and interactions over following a process

Historically, strategy has been a repeatable top down process, often plagued by the same individuals, from similar backgrounds, having the same ideas.

Given that strategy is about making choices, it’s non-sensical to continue following a process that results in a similar set of ideas year in year out. Quite simply, it isn’t going to give your organisation the wealth of options it needs to be able to form a well thought out strategy.

Diversity of thoughts is key to the creation of good strategy. Inputs and interactions with individuals from a variety of backgrounds and experiences is key to creating a strategy that can evolve at the same rate as consumer behaviour.

According to a HBR article, From 1995-1998 they increased the number of female executives by 370%, the number of self-identified LGBT executives by 733% and the number of executives with disabilities by more than 200%. This gave the company a much greater level of cultural competence, which allowed it to better respond to the needs of its diverse customer base. Just one of the successes this resulted in, came from the investment into the small and mid-size business B2B market, which was heavily populated with minority and female buyers at the time. By 2001, IBM had grown revenues in this market to $300m, from $10m in 1998.

It seems like the most obvious of statements, but an organisation’s ability to respond to changing consumer behaviours is vastly improved if the individuals making the strategic choices understand their customer’s life experiences. Rigid adherence to process at the expense of the ability to adapt and can lead to reduced performance and organisational drift.

The success of any strategy, even not-for-profits, can also be reflected in an organisation’s P&L statement. But whilst the cost elements are typically quite predictable, the revenue is very much at the mercy of your customer.

Fundamentally, organisations can’t ever really plan for how customers will behave, all they can do is make choices about an uncertain future and adapt as the picture becomes clearer.

Too often though, organisation leaders spend so much time trying to perfectly predict the future, that their strategy becomes about budgets rather than growth opportunities.

In 2010, following a decade of focussing on bricks and mortar retail rather than imagining a world whereby customers might not need to physically pick up a DVD, the video rental company Blockbuster went bankrupt. Despite repeated attempts, the leadership at Blockbuster were unable to see the potential for new customer behaviours through online streaming and subsequently lost out to their upstart rivals Netflix.

According to Porter states that an organisation should Focus on “a segment or group of segments in the industry and tailor its strategy to serving them to the exclusion of others”. Meaning if one serves customers in its market uniquely well, it will build strong loyalty amongst its customers. This helps answering market opportunity and competitive position questions on an ongoing basis.

Engaging with customers to discover new opportunities, whether it be through in-person communication or technology such as social listening, is critical to determining and evolving a set of choices in an agile manner. There must be an equilibrium of choices between a contractual and inclusive collaboration with customers to ensure the relationship is sustainable.

Is disruption the ‘new normal’ and Agile the answer?

Whilst the arrival of Covid-19 was largely unforeseeable, the impact has only accelerated the direction in which many industries were already heading. Some organisations will have been able to adapt to the ‘new normal’ of remote working, virtual shopping and changing high streets, others won’t. Moving forward, organisations must look to mindsets like Agile in order to build strategies and operations that are able to adapt to the uncertainty of the future. 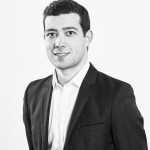 Transformation and the Future of Work

The Future of Work has arrived. How are organisations and government departments adapting to...

Transformation and the Future of Work
Agile

Which Agile Scaling Framework should you trust for your Distributed Agile Delivery?

With self-isolation and millions working remotely, there’s a greater need than ever to...

Which Agile Scaling Framework should you trust for your Distributed Agile Delivery?
Agile

Is your IT run ready for agile?

For agile to succeed, organisations must address the difficult task of integrating IT run...

Is your IT run ready for agile?
Show all