Is it true that if a football team scores a goal, they are suddenly more likely to concede a goal than they were before? Last week we investigated whether goals were more likely to come in pairs by comparing the number of goals occurring in the 10 minutes after a previous goal with the number of goals in that same 10 minute period across all games in that league. This week we take into account the strength of each team, as well as who is playing at home, to calculate a more accurate “expected number of goals” which is split by team. This will address the possibility of some games simply being more likely to have goals than others, while allowing us to answer the additional question of whether the scoring or conceding team is more vulnerable to another goal than the other.

From the data we have available there are 3 major factors we can use to predict how many goals a team is likely to score in a given match:

We can assign numbers to each of these three factors by looking at all games in the league. To address home advantage, we calculate a Home/Away Strength Factor by calculating how many goals home/away teams score per match in proportion to the average of all teams in all matches in the season. For the Premier League in 2015-2016, for example, the factors are:

We also calculate an Attacking Strength Factor and a Defensive Weakness Factor for each team in the league by looking at how many goals that team scored/conceded in proportion to the average for the league. For Manchester City in 2015-2016, for example, the factors are:

Finally, because teams don’t play themselves, the mathematics requires us to adjust these factors slightly to avoid consistently overestimating the number of goals. This is done by dividing the predicted number of goals in a game by a correction factor calculated for each league, which varies from 1.002 to 1.004 for the leagues considered.

By making some common assumptions about the distribution of goals and the independence of the three main variables, we can calculate the expected number of goals the home team will score in a given 5 minute period using the following formula:

Similarly we replace the Home Strength factor with the Away Strength Factor to get the expected goals for the away team.

We can then take the average of these figures across all goals to produce a similar table to the one we looked at last week, but with team strength accounted for:

Figure 1: Actual vs. expected number of goals in the 10 minutes after a goal had been scored in European leagues in the 2015-2016 season, accounting for home advantage and strength of teams

Once we take into account the strength of the teams playing, the percentage increase in goals between 5 and 10 minutes later is just 5%, so we should be cautious to claim based on this figure alone that there is an increase in goals directly related to the first goal being scored. 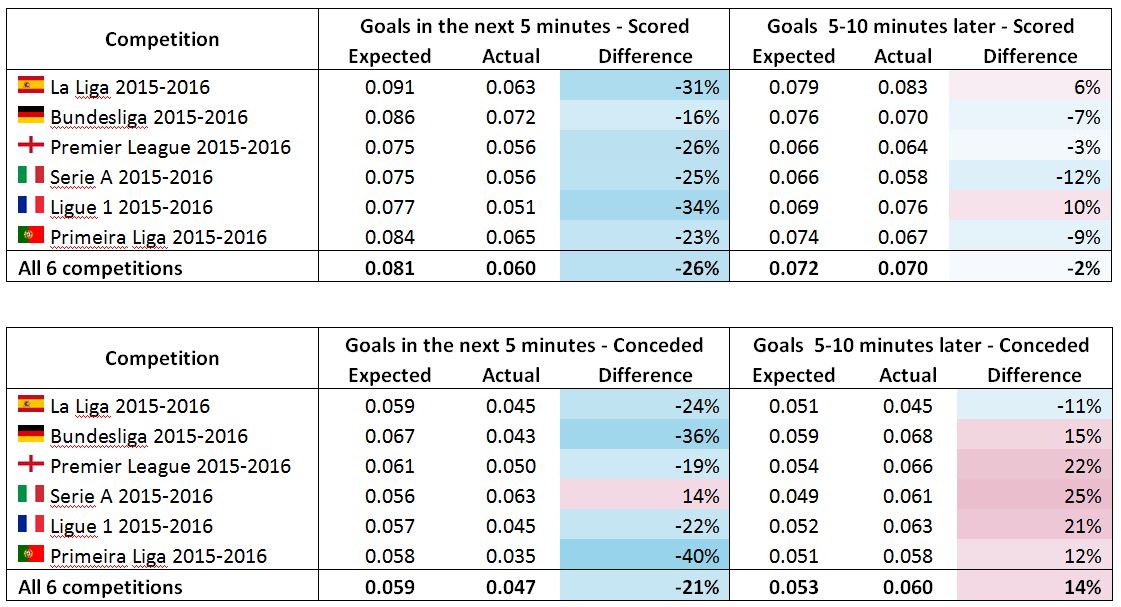 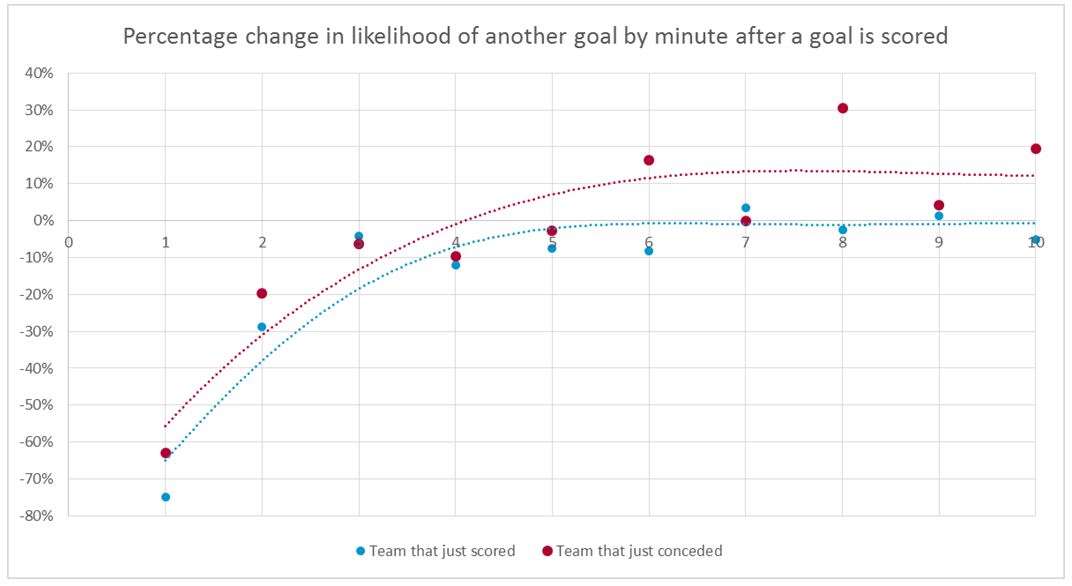 Figure 3: Percentage difference between actual vs. expected number of goals by number of minutes after a goal had been scored across 6 European leagues in the 2015-2016 season, split by team that just scored/conceded

So if your manager warns you that it’s vital not to let your guard down in the 10 minutes after you’ve scored, his advice may be worth listening to, as the data is on his side.