There’s something about Wimbledon that I find fascinating. It’s a quintessentially British event, allowing the country to indulge its obsessions with weather forecasts, national sporting hopes, and possibly most important of all, queuing.

Wimbledon is one of the few major sporting events that maintains the tradition of offering some premium tickets on the day. These are sold on a first come, first served basis. Every day a limited number of tickets for the top three courts (the ‘show courts’) are made available.

This has resulted in the queue for these tickets almost becoming an event in its own right. The preparation and governance around the queue is meticulous, including a 26-page guide to the procedures and rules of the queue (including a double page spread on The Queue Code of Conduct). The queue also features prominently on the front of the Wimbledon website:

The queue itself is a very simple system; when you arrive you get a ‘Queue Card’ for either the day you arrive or the following day. These are numbered and dated, so each day’s queue begins the day before. When the gates open, the small number of premium tickets and thousands of ground passes are put up for sale. When all tickets are sold, that day’s queue is complete.

So what does queuing at Wimbledon have to do with analytics?

It surprises some people to know that there are formal mathematical models of queues. These have applications in many fields from queues of people (airports, post offices etc.), through to routing information through communications and IT systems. These models are one reason why ‘single queue, multiple server’ queues are prevalent in most areas of life; they are proven to reduce the variability of your waiting time, making the queue system inherently ‘fairer’.

What happens when we apply mathematical models to the Wimbledon queue?

When constructing this model, we actually don’t need to use a lot of advanced queuing theory, as the amount of time needed to serve someone isn’t a factor, as the queue exists (at maximum capacity) before tickets start being sold. The key thing that will matter is the rate at which people drop out of the queue early without purchasing a ticket.

If we do this calculation and plot it for queue positions up to 2,000, we get the following: 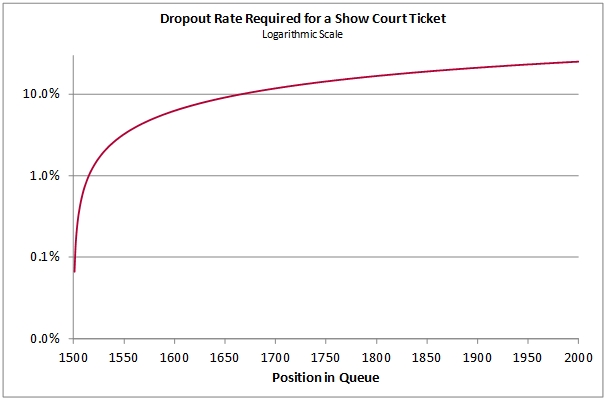 Position 1,650 would need a 9% dropout rate to get a show court ticket. On the second day of play, that was a 4 a.m. arrival. Conversely, if you think that 2% of people will drop out, you should be happy with a position up to 1,530.

The takeaway from this is that the earlier you arrive, the better.  To get a show court ticket you almost certainly have to camp out from the day beforehand. The good news is that the queue has spawned its own (unofficial) Twitter account, @ViewFromTheQ, with over 3,000 followers at the time of writing. People are able to tweet their arrival time and the card numbers being handed out.

How long can I expect to wait?

This does also allow us to do some further (non-rigorous) analysis. By taking the tweets from the account, we can approximate the arrival profile for people each day, and calculate the optimum time to arrive. Extrapolating between the tweeted data points for the first Thursday, we have the following show profile: 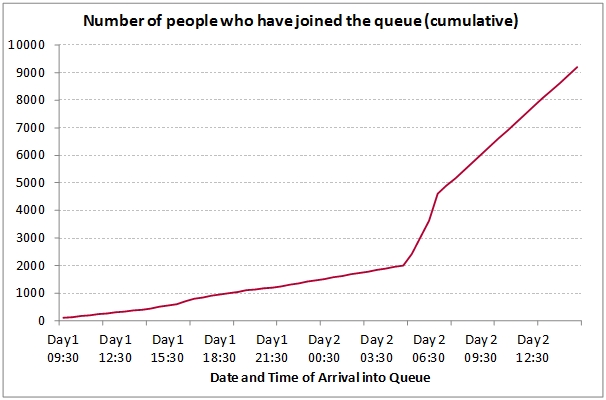 This profile will of course vary from day to day, as will the number of ground passes (Wimbledon reduced the numbers on day three due to the hot weather). If we assume this profile, when is best to join the queue? @ViewFromTheQueue provides a little data on the time people actually entered the queue, however, this requires us to make more assumptions. From the data points we have, it seems that Wimbledon is able to process 3,000 people out of the queue an hour at the beginning of the day, with the rate slowing down as play gets underway and the ground starts to fill up. Again, we have no information about how Wimbledon actually manages entry from the queue, so assuming this as a constant rate is as good as we can do.

So we assume 3,000 people an hour can be processed for the first hour and a half after opening, and then 1,000 an hour thereafter.  In calculating total waiting time, we add the amount of time between arrival and the turnstiles opening, plus the amount of time required to process everyone who enters the queue before you.

Using the above assumptions, we get the following graph: 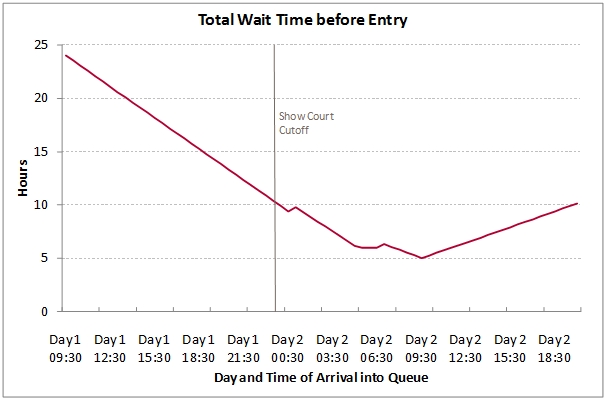 The grey line represents the point at which you would no longer get a show court ticket (around midnight the day before). The interesting thing here is the inflection point we get around 9:30am, when the turnstiles open. This coincides with a big increase in the show profile of people, which means arriving later will actually increase your wait time.

Queuing is all part of the experience

So how does this change our previous recommendation? According to this analysis, if you want a show court ticket, you’re still going to have to camp overnight. However, to get in to the ground all you really need to do is arrive before the turnstiles open, this also has the upside of getting to watch more tennis. Though having read through a lot of queue related tweets, you might be missing out on a lot of the fun!