Beware the “Zombie Statistic”, a statistic that stalks the public consciousness, is accepted as fact but is actually completely spurious. Every time a zombie statistic is laid to rest it seems to rise again. 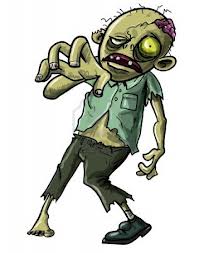 The excellent Radio 4 programme ‘More or Less’, a must listen for anyone interested in topical statistics and analysis in the news (http://www.bbc.co.uk/programmes/b006qshd), has made it its mission to rid the earth of these zombie statistics.

This issue of Figure It Out will stand shoulder to shoulder with our analytical allies from “More or Less” and exterminate a few zombie statistics. We’ll also suggest some ways you can prevent yourself becoming a victim of these deadly stats!

Only 1 in 10 Americans has a valid passport

This is a perfect zombie statistic. A quick internet search shows it popping up all over the place, such as this Yahoo answers page:

I myself have to admit to pedalling this zombie in the past and have heard others use it too. But has anyone ever checked this statistic’s validity?

US State Department Statistics seem to contradict this 1 in 10 claim:

This zombie statistic has risen to prominence as concerns have grown over the World’s increasing population.

However Radio 4’s More or Less team has proved this to be another case of a zombie statistic.

For this statement ever to be true in the future there would need to be a spectacular increase in the World’s population. So, this statement is not currently true and likely never will be.
Another zombie down!

The NHS is the third biggest employer in the world

Another zombie statistic is that the NHS is the third biggest employer in the world.

This blogger speaks about meeting a woman at an NHS networking conference, who quoted the statistic to him.

In fact, as this BBC article unearths, the NHS is actually the fifth biggest employer in the World.

With the NHS undergoing dramatic restructuring and Chinese and Indian industry growing apace, we might see the NHS fall further down this list over the coming years.

Where did this statistic come from? Was it from recent medical data? Had there been groundbreaking research from notable academics?

“The data on which that statistic is based is from 1700s France. They put together all these church birth records and then came up with these statistics about how likely it was [someone would] get pregnant after certain ages.”

So this statistic was based on French birth records from the 1700s. Truly a zombie statistic!

Whether it’s when talking with friends, reading a newspaper or in a professional capacity at work, it’s important to consider the statistics and evidence being presented.

The importance of robust analysis to support decision making can never be overstated. Protect your loved ones from zombies by using Business Analytics!

When I say the words “voice of customer”, what crosses your mind? For most of us, these three...