As most of us enjoyed the Royal Wedding either glued to our televisions drinking Pimms and lemonade, or taking advantage of an extra holiday to enjoy a game of golf with mates, think of the team at National Grid.

National Grid owns the electricity transmission network across England and Wales and operates the system across Great Britain. This has meant National Grid’s forecasting team has been hard at work trying to work out how much energy will be needed during the Royal wedding. To do this they look at data from previous events which were televised – looking at those that took place on similar days and at similar times. Not only do they have to forecast the amount of energy used, they have to forecast the timing of surges in demand.

However, National Grid says the forecasting team have had to “mix and match” data from different days and events because this Royal Wedding is unlike any event seen before.

Figure 1.1 shows the ½ hourly demands for the period of 26th Apr 2011 to 2nd May 2011.  Although the chart does not show the instantaneous surge in demand it clearly indicates the different demand profile for the Friday morning 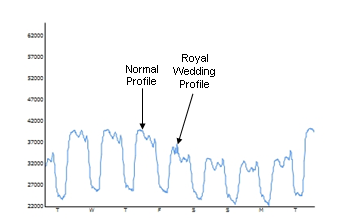 The forecasters have to consider the size of the effect of the wedding.  The largest surge in demand during Charles and Diana’s wedding in 1981 was a huge 1800 Megawatts (MW), equivalent to 720,000 kettles being boiled at the same time. By contrast, the biggest surge for Edward and Sophie’s big day in 1999 was around 750 MW.

This information is useful, but other factors need to be taken into consideration

All these challenges are what drive forecasters in all areas of Industry.  An accurate forecast not only provides satisfaction to the forecasting team, but could also have a huge impact in customer satisfaction and minimised costs for clients. Imagine the poor customer who is enjoying the wedding only to find that their electricity is cut off at the vital moment.

So after the event of Royal Wedding, how did the forecasting team at National Grid perform?

Before the event the team at National Grid control centre was anticipating a TV pick-up of 1200 to 1600 Megawatts. In reality the pick-up was far higher with a surge of 2,400 MW when television coverage passes back to the studio after the procession to Buckingham Palace. This places the Royal wedding in 4th place in terms of demand from a televised event.

So forecasters beware, if the next Royal Wedding takes place on the same day as the 2014 World Cup final featuring England v Scotland.  If this happens make sure you a have a flask at the ready to make that all important cup of tea.

Note: Capgemini Operational Research has a strong forecasting capability. We have carried out a number of forecasting assignments for a range of clients across a number of Sectors.  For further information please contact Nigel B. Lewis or Barry Sless.

How to manage digital transformation projects: the Scottish Water story

Energy and utilities organisations could save a lot of capital with the implementation of...

How can data encryption help protect your organisation?
Show all