Aircraft engines are expensive equipment. But if they are not mounted into a fully equipped plane that can be safely operated in a reliable way, they are quite useless and do not deliver any value to their owners or to society.

The same is true for switchgear and transformers in a power grid, valves and pumps in hydraulic networks, railroad switches, or traffic lights on transportation networks.

Realizing value from physical assets is generally seen as the main objective for asset managers. As the Institute of Asset Management (IAM) says in its widespread white paper “Asset Management – an anatomy” “Although individual assets can contribute value to an organization, it is usually when they are connected together as an asset system, or a larger entity, that they generate value for an organization.”

I was delighted to see the notion of an asset system appearing as of the first release (2011) of the Anatomy. I have been working on utility asset management projects for many years and have found that – in particular for networks or linear assets – an asset system matched exactly with what we have previously called the “network context” of an asset.

Until then, asset management was very often narrowed down to the level of the physical equipment, sometimes grouped in classes of equipment (by type, age, supplier, etc.) that were supposed to fit under the same maintenance or investment strategy. That resulted in a very constrained view of risk management and wider value release at the network level.

The figure below shows the asset information structures with the network in a central position, next to the IAM Asset Management Triangle positioning the asset system. 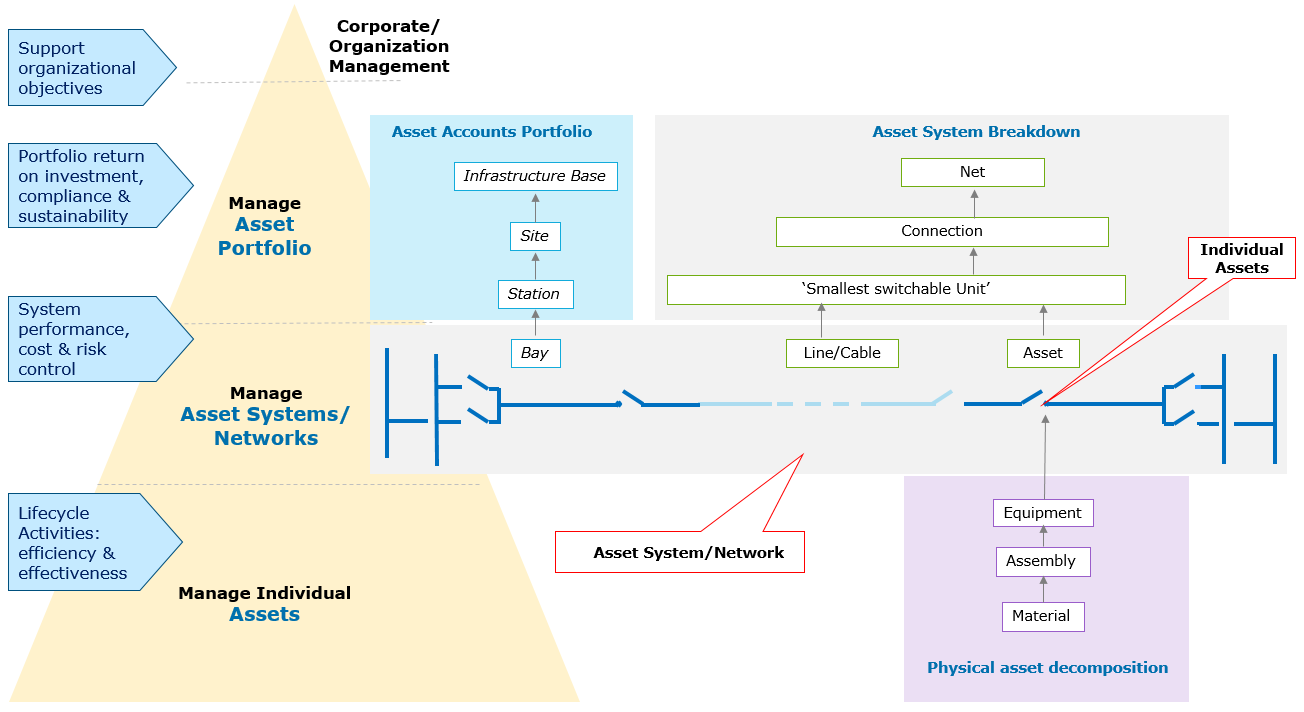 The organizations that build and operate power systems, hydraulic networks for water and wastewater, rail, tramway, and other transportation systems all share the so-called Linear Problem Statement: how to model the network connectivity from the entry (first switching point) until the client-network access point?

Creating such an end-to-end network model may look like a simple task but generally this turns out to be a big challenge for many utility companies as the concept is often unclear. Even critical infrastructure operators such as TSOs (Transmission System Operators) struggle with Network Model Management. In an introductory chapter of the Electric Power Research Institute (EPRI) paper “Network Model Manager Technical Market Requirements: The Transmission Perspective,” the authors from eight leading electric utilities see the fragmented engineering organization and the lack of unifying architecture around network model management as the root cause of this issue: “Network model information flows originate from a number of sources in a variety of forms, flowing to multiple target systems, and are inconsistently triggered by many different events.”

Across a series of recent projects, not only in electric TSOs, our key observation is that there is insufficient awareness and understanding of what an asset system is, and how a “single version of the truth” in a network model has to be conceived to support value generating asset management at a network level. As opposed to asset management, “Asset System Management” still must be understood and implemented in most organizations and that requires a cross-silo management initiative.

“It’s the economy, stupid” worked well as a slogan for Clinton’s campaign in 1991 because it brought back the focus on the economy as the source of value and welfare. Similarly, “It’s the asset system, stupid!” could re-focus network operators on the whole asset system as it is the foundation of any next-gen AMI program, smart grid initiative or smart city ambition.

Many network companies still do not have a digital model of their asset system let alone a digital twin. In water and gas networks “above ground” assets are often managed separately from the “underground assets.” Electric station and substation schemas or P&IDs of hydraulic installations exist as (scanned) paper documents or isolated CAD drawings but are not linked together in an end-to-end connected model. Taking the step towards digitizing in-plant connections down to the low-voltage and low-pressure distribution cables and pipes is a big project for organizations that operate thousands of them over large distribution areas. Extending the ambition to client connections, the last-mile delivery link that is so valuable for smarter operations and service, makes the task even more ambitious.

Big projects such as these require a clear mandate and focus at an enterprise level. Understanding of the Asset System and awareness of its foundational importance is essential to obtain that mandate. Once a mandate is expressed, the projects to create the master network model deserve a separate corporate initiative instead of assuming it will be done implicitly in a smart grid or smart meter program.

In the following contributions, we will further explain why an asset system perspective should be adopted and how the constituent parts can be structured to successfully undertake the journey of releasing the value from a network of assets.

The French philosopher Denis Diderot once said, “The first step towards philosophy is...

What is an asset? Next time you’re in the kitchen, look at your fridge. It may represent...

Awaken your assets with Intelligent Asset Management
Show all