“Edit common attributes” was typical functionality that I have seen in several GIS applications used by network operators during the last two decades. In short, the user had to select several connected features on the map, for instance the cables and junctions between two switches. Pushing the “edit common attribute” button then opened a form with the attributes that were common to all these equipment features so one could enter them in one cycle instead of clicking and editing each object separately. The common attributes were usually functional (hydraulic, electric) in kind, so for example one would give the same voltage level to the selected features that were electrically connected.

But any experienced information modeler immediately gets suspicious about functionality that systematically edits the same information for multiple occurrences of the same information objects. It is a strong indication that the model is incomplete and there may be another information object from which these attributes would logically be inherited. As previously described this is information that belongs to the asset system, from which individual assets should inherit the functional characteristics. Electrical or hydraulic business rules (11 KV cables can only be connected to 11 KV switches) are indeed governed on the asset system level.

Unfortunately, none of the GIS and EAM asset registers that I have seen, implement good models to manage the lifecycle of asset systems. Asset systems are characterized by virtual objects defined “by design” for an asset system according to the hydraulic, electric or civil engineering principles. Some of these principles are fixed for an entire network, based on regulations or standardization guidelines, for instance the rail gauges that are determined by country or continent. It makes sense to register the gauge type for each rail track, but this information attribute is determined at a higher level than the individual track.

Information models for asset registers (it does not matter whether they reside in GIS or EAM packages) are generally too focused on the physical equipment, i.e., the technical assets. Functional objects exist in operational systems (ADMS, OMS, SCADA) but are seldom defined on an enterprise level in a way that they would become useful to asset management processes. In a smart-grid future, a shared vocabulary will become necessary and a supporting asset information model should establish traceable links between the financial, operational, and maintenance realities to model and determine costs and risks. 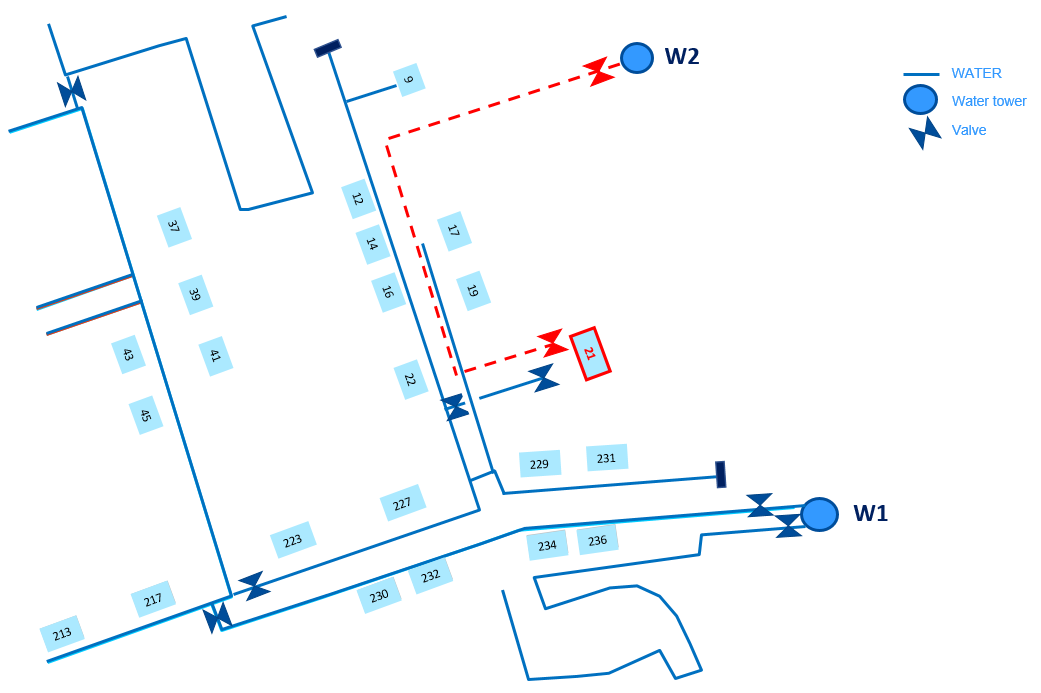 As an example, a water distribution network comprising assets (pipes and nodes) in a residential area as illustrated in the picture. The water distribution company has a strict SLA on one house connection on the right (no 21) and the existing network (blue lines) is insufficiently reliable to meet the SLA requirements. A redundant supply from another water supply (tower W2) is needed and the company decides as an investment project to build the alternative water supply route. They also design it to be the default route, keeping the existing network as the fallback.

It is intuitively clear that the new net (dotted red line) is conceived as one new asset system element with consistent hydraulic characteristics (pressure class, diameters, etc.) for the entire length, regardless of how many pipe sections, welds, valves, hydrants, etc. are being constructed. All this equipment should inherit the designed characteristics from the asset system design, determined by the hydraulic inputs such as the outflow pressure from the reservoir and the volumes to be distributed.

Since the project fits under one specific business purpose (security of supply) in the investment portfolio, the whole initiative will most likely be just one financial asset account record. In order to link financial and operational performance of asset systems, the smallest common denominator must be found between the financial breakdown of the asset base, and its operational breakdown into “switchable” asset system sections.

The smallest switchable section of a network (e.g., between two valves) will be the basic record of an asset system. Indeed, most operational events occurring on the network will not be related to a specific physical equipment, but to an asset (sub)system. Some examples:

In a perspective of asset system management, it is important to keep the historian of these events with the corresponding (sub) networks. The business drivers for the three examples above are:

I recently came across several cases in water and electric utilities that wanted to use the huge amount of measured data they already collect on the network for analytical purposes. In all of them, measured event data turned out to be insufficiently reliable to draw conclusions from: time series were available for continuous periods, but it was impossible to trace back the corresponding network configuration for each period. Hence the data had a different meaning over time and trend analysis for instance proved to be quite difficult because one would have to distinguish unexpected “trends” from the ones that are explained hydraulically or electrically as a consequence of a switching operation.

Digital twins are the new hype in asset information management. We believe the concept of a digital twin is consistent, but unfortunately it is (mostly in a retroactive way) applied to physical equipment only. Establishing digital twin models for networks requires another abstraction level and insight in investment and operational lifecycles. We will elaborate on this topic in further articles of this series.

What’s so special about asset systems for network operators?

Although a digital network model is essential for the deployment of smart grids and the roll...

Everyone who uses a public transportation system such as the London Underground intuitively...