The evolving landscape of the P&C insurance industry

Today, we have gathered to talk about the Japanese P&C insurance industry, which is a growing business sector with almost 8.7 trillion yen of net premiums written in 2020 and is also a core practice here at Capgemini Japan.

As we are aware, the landscape of this industry is rapidly evolving at a global level due to newly emerging trends and the risks they pose. In the World Insurance Report 2019, our company identified five broad macro trends which are exposing humans to new risks, pressuring insurers to challenge the status quo: disruptive environmental patterns, technological advancements, evolving social and demographic trends, new medical and health concerns, and changing business environment.

The Japanese P&C insurance industry is no exclusion, with shifts such as super aging population and declining car ownership. Insurers must be attentive and agile to keep up with consumer needs at the right time. However, looking at the composition of net premiums according to product category, Japanese P&C insurers don’t seem to be adapting to the presence of emerging risks and demands in the market. For example, automobile-related offerings still account for 60% of the net premiums written, whereas new offerings which include products for newly emerging risks account for only 15% – there’s not much of a change from past decade. The question is, why are Japanese insurers slow to change? 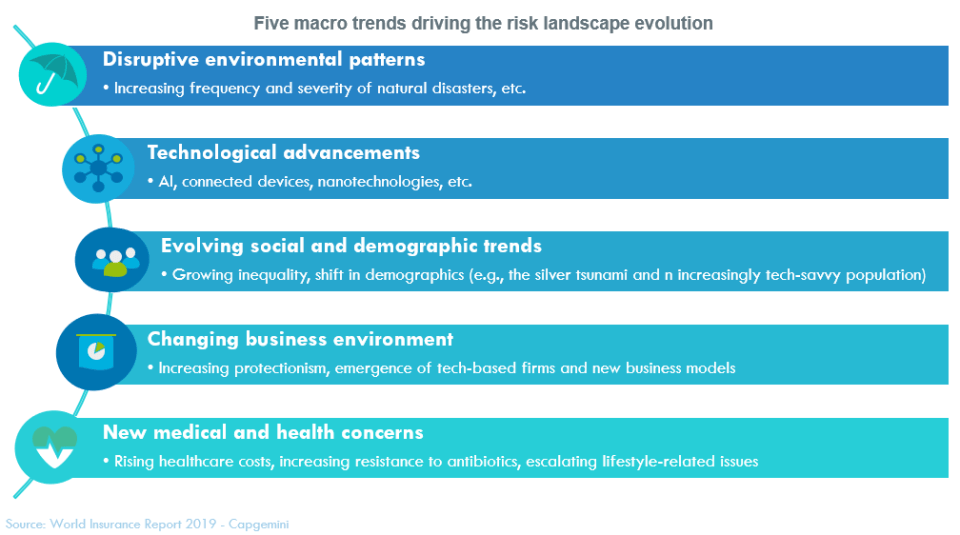 Legacy systems as the major barrier

I think I have the answer to that, Marika. I agree that Japanese insurers are falling behind when it comes to adaptability, especially compared to their global peers in, say, the US. This is due to numerous barriers; however, the most influential one is the legacy system used by the insurers.

Many Japanese P&C insurers still rely on their outdated computer systems referred to as “legacy systems” which were built on mainframes in the 1980s to operate their businesses. They could not renew their systems earlier since they were busy dealing with decade-long accusations by the Financial Service Agency for their unlawful unpaid benefits from 2006.

Legacy systems negatively affect the agility of insurers in three ways. First, their gigantic and complex structure require millions of lines of codes, hence months or years, to execute something new. Next, the applications in the systems are written in legacy mainframe languages such as COBOL – not only they are incompatible with other languages, but there is also a severe shortage of mainframe language programmers since the community is at retirement age. Finally, legacy systems suffer from vendor lock-in, where system support can only be provided from a particular vendor. Inside a legacy system, all the components from the hardware to the application are usually custom made by a particular vendor. This vendor lock-in shuts out external help and gives the vendor a huge bargaining power. Basically, Japanese P&C insurers are stuck because of their legacy systems which require a huge amount of cost, in terms of both time and money.

That’s a great point. There is only one way out of the current situation: legacy system modernization. By using a new system compatible with every company and every developer instead of a specific vendor, insurers will have multiple vendor choices and will benefit from function extensibility, easier access to resources, and optimized price.

There are various options and combinations when modernizing to open systems. For example, when changing the hardware, the choice will be either to use a standard product on premise, or to migrate the digital/IT assets into the Cloud. Then they can replace the OS to the standard Windows or Linux. As for the application, insurers can develop one from scratch, or use third-party packages; here, it will be important to replace the incompatible legacy language with a standard language like Java. Insurers must evaluate factors such as cost, effect, and value in order to choose the right modernization approach.

Cloud migration is the solution

I see. Considering the market characteristics of the Japanese P&C insurance industry, I believe we can state that Cloud migration is the best modernization approach. The top priority for them now is to keep scaling their business by improving their agility and flexibility. However, they cannot afford a prohibitively high expense since they are already paying a large maintenance fee for their current legacy systems, not to mention that 90% of insurers are small and medium-sized businesses.

Cloud migration fulfills all requirements. The first prominent feature of the Cloud is scalability, which is the ability to easily add or subtract services as needed without impacting performance. Next, Cloud-native applications support practices such as microservices that allows companies to release incremental changes frequently, leading to market responsiveness. I think I will leave the explanation of microservices to Shogo since he is familiar with the field. Last but not least, there’s no question that Cloud is budget friendly. Cloud computing is 100% variable costs; investment in onsite hardware and infrastructure is unnecessary, and users are charged in a subscription-based pricing model.

Cloud migration is indeed an imperative. Speaking of microservices, this type of architecture is highly suitable for P&C insurers who have or aim to have a variety of workflows and offerings.

The microservices model is an architectural approach to creating cloud applications, separating insurance functions such as policy, claim and billing, into individual modules. The modules are communicated over APIs (Application Programming Interface: an interface that defines interactions between multiple applications) and managed using the API gateway. The components can be built, deployed, and tested flexibly and independently when executing something like product development. Therefore, faster iteration cycles are achieved, resulting in efficiency. In contrast, operating without microservices would mean that alteration in one function requires alterations of all functions, which is costly.

I think we are ready for a wrap up. To summarize the story, legacy systems are preventing Japanese P&C insurers from being up to date; thus, system modernization is a high priority. By opening the system, the choices of vendors that support the system will expand and agility such as time to market for new products will be enhanced. Among the means of opening systems, Cloud migration is essential if insurers want to exploit further growth in the modern era.

Capgemini’s Digital Customer Operations suite of offers is helping our clients deliver a...