Economic growth is increasing the threat of climate change. It is triggering growth in global energy demand, which increased by 2.1% in 2017, (compared with 0.9% the previous year) This has made it difficult for countries to achieve the Paris 2015 Climate Accord objective to keep the global temperature rise below 2 degrees Celsius in 2050.

It is now unclear how governments will be able to announce increased ambitions in line with the goal of holding global warming at 1.5 degrees Celsius in 2050.

World Energy Markets Observatory (WEMO) is Capgemini’s annual thought leadership and research report that includes useful insights and trends that every energy and utility player should know about as they plan for the future of their business.

Our 20th edition is drafted mainly from public data combined with Capgemini’s expertise in the energy sector. Special expertise on regulation, climate challenges, and customer behavior has been provided by research teams at De Pardieu Brocas Maffei and VaasaETT.

The current edition monitors the main indicators of the electricity and gas markets in Europe, North America, Australia, and South-east Asia and reports on developments and transformations in these sectors and addresses six main topics that include:

Gas is still a regional commodity

Global natural gas demand grew by 3%, thanks in large part to abundant and relatively low-cost supplies. China alone accounted for almost 30% of growth globally. Gas prices rose in Europe, Asia and North America in 2017, but remained below the 10-year average.

Coal demand and prices are up

Despite being the major commodity least loved by analysts, global coal demand rose about 1% in 2017, reversing the trend seen over the last two years. This growth was mainly due to demand in Asia, almost entirely driven by an increase in coal-fired electricity generation.

The digital revolution is accelerating

Digital adoption has huge potential to decrease costs in the industry and service sector – among others, IoT and Blockchain witnessed progressive adoption. Grids are strongly impacted by the increased share of intermittent renewables and grid operators will strongly benefit from digitization. However, cybersecurity still remains a big concern, but this will not prevent utilities from deploying their digital transformation plans.

Our World Energy Markets Observatory (WEMO) 2019 has launched. Get your free copy today! 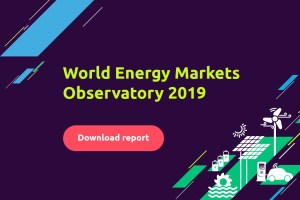 Southeast Asia is moving towards a clean energy system, but high energy demand and cost...

Australia is well on track to meet its 2020 target.

“In 2017, a stronger economy meant Greenhouse Gas emissions rose for the first time in several years; as a result of the 2050 climate change objectives may well not be met. The European Union has taken some measures, but they are insufficient to reach a meaningful carbon price, of around €55/ton. For this to be achieved, carbon floor prices would be needed at either regional or national levels.”

“We observe Oil and Gas majors playing in the retail and renewables markets with significant resources and ambitions. Meanwhile, the Utilities landscape is changing fast. All segments of the value chain are impacted by digital transformation, from client relationships and operational processes, through to grids and interactive services, with a huge potential to decrease costs. Legacy players need to accelerate their transformations and step up their focus on new service-based business models as competition from different domains including new entrants, oil majors, retailers, and GAFAM, is increasing.”

Amidst ever-growing demand for energy, geopolitical tensions, technological developments, and...

Our experts share their insights and recommendations based on the findings of the report.

Philippe Vié is the Global Energy, Utilities and Chemicals Sector Leader at Capgemini, and has been in the industry for over 25 years leading transformation projects globally.