There’s a gentle wind in the trees, a breathtaking view across the water, and your legs are satisfyingly tired from a long hike. A rare moment of peace in a natural setting. Out of curiosity, you check if your phone has a signal. Zero bars. No chance of a distracting email or SMS. You relax a little more.

We’re so used to always-on connectivity that an entire industry exists to help people spend less time online. You can’t scroll social media for more than a minute without seeing an article about switching off your phone and finding a new purpose in life. It’s easy to forget that for most of the world, the kind of always-on connectivity we dream of escaping is itself a distant dream.

The UN expects half the global population to be connected to the internet by the end of 2019. They’ve been working hard to help developing countries reach this goal, but even if it is achieved (the same target was missed in 2017), that still leaves 3.8 billion people not connected. Worse, the UN defines “being connected” as using the internet once in a three-month period – hardly the kind of access most in the developed world are used to.

Current technologies are most effective at providing connectivity in high-density urban environments, but about half the world’s population don’t live in urban areas. Several enterprises are working on revolutionizing broadband connectivity by putting a core network into space.

In May 2019, SpaceX launched 60 satellites on one rocket as the first stage of its Starlink space-based broadband network. With characteristic Musk understatement, they marched across the night sky in a startling “satellite train” announcing the arrival of a bold new enterprise.

SpaceX plans to launch up to 12,000 more Starlink satellites by the mid 2020s, creating a global core network that can deliver 5G anywhere. Other companies, including OneWeb and Amazon, are planning their own mega satellite constellations with the same aim.

Unlike traditional satellite communications networks, which rely on a few large satellites in high orbits (about 35,000 km), the new approach is to deploy a very large number of small satellites in low orbits (340–1,150 km). The main reason for this is to minimize latency. Even at light speed, it takes noticeable time for a signal to travel 35,000 km into space and back. In contrast, the Starlink network is aiming for latency of 10–20ms.

Unlike its predecessors, 5G is being designed to work with space-based networks. The global 5G standards coalition, 3rd Generation Partnership Project (3GPP), is incorporating interoperability with satellite technology to ensure it is flexible enough to take advantage of the network of networks expected to help in the development of global telecoms infrastructure.

If you think the internet is big right now…

Currently, a lot less than half the world is genuinely online. The arrival of Starlink and similar networks will improve the options for connecting the rest of the world, but it’s not quite as simple as that.

These space-based networks are essentially an alternative to the existing internet backbone. Like the ground-based backbone, Starlink won’t be able to connect with edge devices directly, local nodes will still be required and SpaceX plans to build up to a million ground stations for this role. None of this will be cheap, so it remains to be seen how these costs will mesh with the idea of connecting the world’s unconnected, who are also the world’s poorest.

Assuming Starlink and its competitors do bring significantly more people online, what will that mean? The value of the internet has always been in its reach. Commercially, the more people can access your services, the greater your potential revenue. With millions, and perhaps billions, more people online in a relatively short period of time (Starlink is due to be fully operational by the close of the 2020s) the potential for growth and diversification is staggering.

This blog is part 2 of a series of five written by Capgemini Europe Chief Technology and Innovation Officer, Gunnar Menzel. 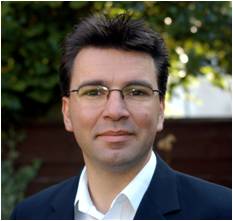 I am responsible for innovation, enterprise architecture and technology transformation for our clients providing strategic support from across the Infrastructure Services organisation.