A bunch of Google developers started the project as a way to orchestrate containers, which they open-sourced to the cloud-native computing foundation. Today it is one of the most popular systems and the de-facto standard for running your containers.

There are various reasons for that. We’ll look into what Kubernetes is in the first place, why it is so popular, and what problems it solves, in plain and simple terms.

Kubernetes is an open-source container-orchestration system for automating application deployment, scaling, and management.

According to Kubernetes, “containers are a technology for packaging the (compiled) code for an application along with the dependencies it needs at run time. Each container that you run is repeatable; the standardization from having dependencies included means that you get the same behavior wherever you run it.”

If we need to spin up a stack of applications in a server, such as a web application, database, messaging layer, etc., this will result in the following scenario: 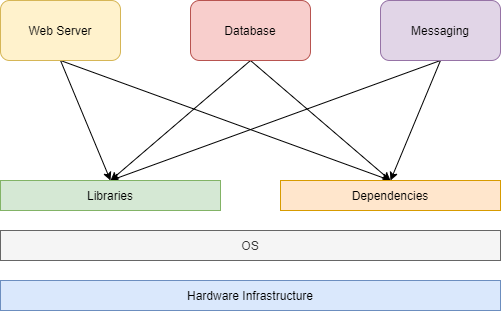 The matrix of hell

The design has multiple problems. A web server might need a different version of a library as compared to the database server. If we need to upgrade one of the dependencies, we need to ensure that we do not impact another app that might not support it. This scenario is known as the matrix of hell and is a nightmare for developers and admins alike.

It works on my machine

Before containers, organizations solved this issue by using virtual machines. A virtual machine is an emulation of a computer system. Virtual machines are based on computer architectures and provide the functionality of a physical computer using software called a hypervisor, such as VMWare. A typical VM-based stack looks like this:

We have resolved the dependency problem, and we are out of the matrix of hell. This architecture was groundbreaking and is still in use today.

Problems of the virtual machine era

We were trying to solve the runtime, library, and dependency problems, but we introduced a heavyweight guest OS layer in between, which has its disadvantages. A virtual machine is heavy and slower to start.

Also, we need to allocate a minimum amount of resources to the guest OS, and organizations over-provision resources to VMs to meet the peak utilization of the VM rather than the regular use. VMs waste a lot of computing resources because a significant percentage of allocated resources remain unutilized.

Containers balance the problem out by treating servers as servers. We no longer have a separate VM for the webserver, database, and messaging. Instead, we have different containers for them. Confused? See the diagram below.

A container runtime provides an abstraction layer that allows applications to be self-contained and all applications and dependencies to be independent of each other.

Containers solve a lot of problems:

Containers are portable – A container doesn’t care where it is running and behaves the same in all environments.

Containers are more efficient – Since containers do not contain a guest OS, they boot up extremely fast. While it takes minutes to boot a VM, it takes seconds to spin up a new container.

Containers are scalable – As containers boot fast and have a low footprint, spinning up new containers is very easy. You can have multiple containers scaling up and down independently within an OS and sharing the resources.

Containers are lightweight – Containers have a very light footprint. You do not need to allocate set resources to a container, and it can use the underlying OS resources, similar to an application. They require less computing resources to run in comparison to VMs.

Because of this, containers give us a lot of power. You need to use only the required amount of containers at a given time for best resource utilization.

As containers are temporary, if something goes wrong within your container, you can simply destroy the existing one and create a new one. That allows you to do canary deployments, blue-green deployments and A/B testing with ease.

You cannot do all these manually. You need something that can take care of all these aspects for you, and therefore the answer to it is a container orchestration platform, such as Kubernetes.

The idea of using Kubernetes is simple. You have a cluster of servers that are managed by Kubernetes, and Kubernetes is responsible for orchestrating your containers within the servers. You treat servers as servers, and you run applications within self-contained units called containers.

Since containers can run the same in any server, it doesn’t matter what server your container is running on. If you need to scale your cluster, you can add or remove nodes to the cluster without worrying about the application architecture, zoning, roles, etc. You handle all of these at the Kubernetes level.

Kubernetes uses a simple concept to manage containers. There are master nodes (control planes) which control and orchestrate the container workloads, and the worker nodes where the containers run. Kubernetes run containers in pods, which form the basic building block in Kubernetes. 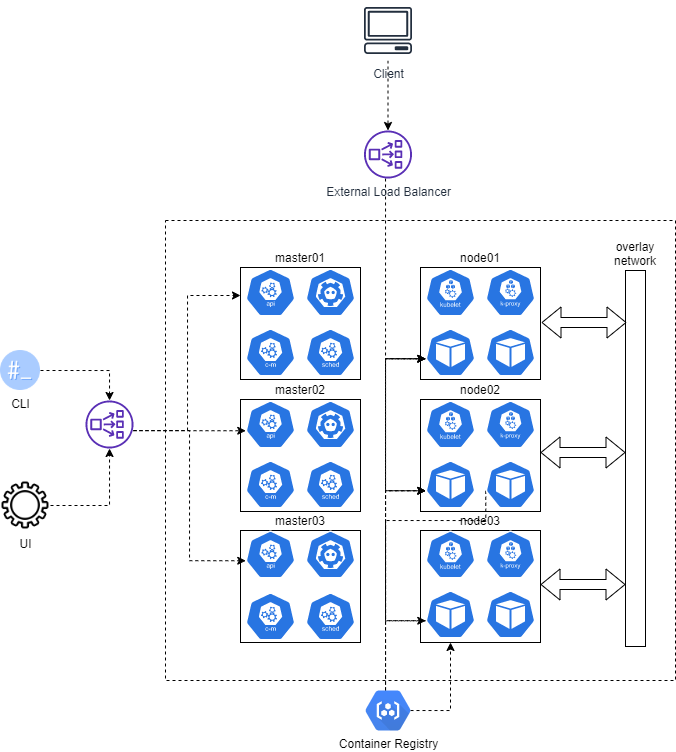 Kubernetes essentially does the following:

For more information on Kubernetes Platform and use cases, please reach out to me via my Expert Connect profile or LinkedIn.

Intelligent Edge computing is the future of network architecture. It will propel...

2021 predictions: The year of the cloud

2020 was a year of realization for the cloud. With the onset of the pandemic, any...

2021 predictions: The year of the cloud
cloud services

Why cloud should be a core part of business financial planning

Financial planning is essential to business success. It is the foundation upon which goals...