It’s 2030 users no longer switch on their devices and login to their device and applications. They no longer need to context switch between all the different applications they have. Instead they have password less multi factor authentication using biometrics into their ‘work portal’ for all their dynamic workplace services in their secure digital workplace. From within the work portal they have a feed of information, notifications and work tasks. The portal also includes collaboration, common actions, recent apps and recent files. It is the only interface they need to do their work. Their productivity is much higher than in previous years as they no longer need to waste time context switching between their many applications.

So let’s take a look at how we arrived at today’s digital workplace solutions. This is a very interesting time to be involved in the digital workplace. The rate of change we are seeing right now is faster than it has ever been with no sign of it slowing down. But what does the future hold for the workplace? I believe If you want to see what the future has to offer in this space, we need to only look back at the past. Those of you who have been involved in the workplace for any length of time will know that things tend to go in cycles.

When I first started in the industry in the 80’s most organisations applications were on mainframes. The way these applications were accessed were via terminals. Typically, after the user had logged on to their terminal, they would be presented with a choice of apps in addition to some other information such as company news – or perhaps even some general news headlines. Back in these days all the processing, applications and data lived in the data centre with the terminal providing secure access. Indeed, these data centres were generally isolated (with no networking beyond the local office and data centre).

Fast forward a few years to the early 90’s and all this centralised computing power, applications and data was typically decentralised and put onto users’ devices. This enabled a higher degree of user flexibility. The development and general availability of the new ‘PC’ or personal computer gave users their own dedicated computing power with their applications and data stored locally on their own machine. A few years later these machines were then typically connected in some kind of network – and later in the 90’s to the Internet. In addition to making users more flexible, for the first time it opened the possibility of new types of security attacks including viruses and later trojan’s as well as many other types of attack such as phishing etc.

If we move even further forward into the 2000’s things changed again. This was when the consumerization of applications and data accelerated. The large-scale adoption of smartphones with their corresponding app stores in addition to faster network speeds followed by new style apps such as Facebook and Twitter changed how people wanted to access their apps and data. They began to prefer to look at a feed of information with important things being flagged and appearing at the top of their feed.

So what can we learn from this history lesson? What does it mean for the future?

Let’s take a look at the digital workspace problem. Generally speaking each of the phases listed above had a corresponding generation in the labour force: Mainframes and terminals (Baby Boomers), PC’s (Gen X) and consumerization (Millennials/Gen Y). So we now have four generations of users in the workplace: Baby Boomers, Gen X, Gen Y (or Millennials) and Gen Z. Each of these generations has grown up interfacing with their apps and data in different ways and typically have different expectations of how they want to interact with their applications and data. An additional consideration is that we now are heading into the hybrid cloud world* – with the applications and data moving into the cloud. We also need to consider that Millennials are now the largest generation in the labour force. 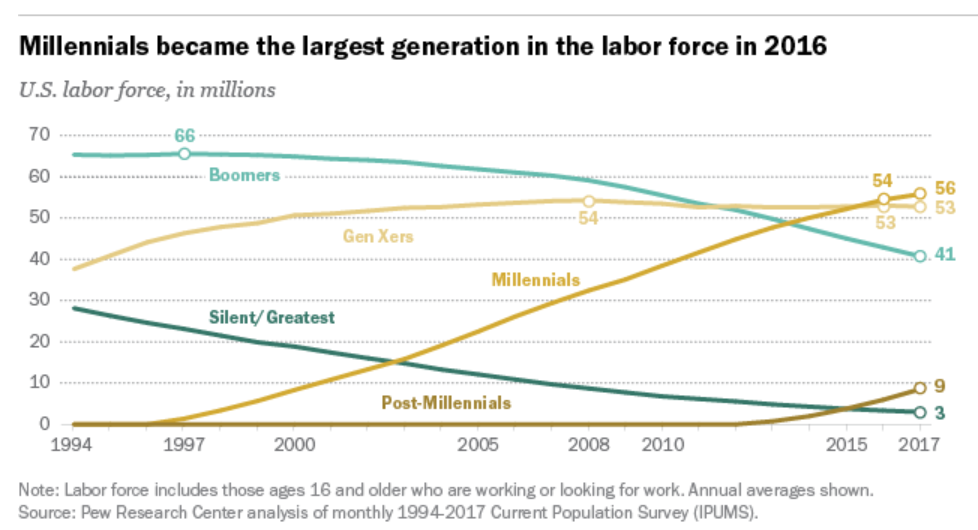 So what’s the answer? There are a lot of similarities between the hybrid cloud world and the mainframe era, with most of the apps and computing power continuing to move over to the public cloud#. We need to allow users to customize their experience to suit their preferences. We also need to be able to meet the Millennials preference for a Facebook like ‘work portal’ of applications, files, information, collaboration and tasks. I believe we are beginning to see solutions such as Microsoft’s Teams and Citrix’s Workspace that allow this type of customization in addition to the required collaboration, task, application and data feed. These solutions will continue to build and develop to meet the changing needs of a diverse workforce. It remains to be seen which solution will become the work portal de facto standard, but organisations that do not adapt to the changing needs of their work force will begin to struggle to attract and retain top talent.

I would recommend  you to read this interesting blog on The future of hybrid cloud written by Vikram Balakrishna.

To know more about Digital Workspace, do visit our Connected Employee Experience and Connected Workspace pages.

Do data centers and sustainability have to be at odds?

Data centers are an organization’s second-largest consumer of energy, so they are an...

Do data centers and sustainability have to be at odds?
cloud infrastructure services

Treat service provision like a developing brain – be reasonable

Treat service like a child…and encourage it to talk back, so you get to learn too

When Alexander Graham Bell invented the telephone to help people communicate with each other,...