What the UK, Dutch, and German governments can learn from each other’s digital initiatives

Governments have made great progress in recent years digitizing public services. The European Commission’s eGovernment Benchmark (led by Capgemini) outlines significant improvement in the performance of European governments in terms of user centricity, transparency, digital enablers, and cross-border mobility. These improvements mean government services are more accessible to citizens (for leaders Malta, Portugal, and Estonia, 98% of services are available online), but it also means governments are becoming more efficient (the UK Government Digital Service estimates it can save up to £1.7billion a year through digital transformation).

Yet governments are only scratching the surface of what they can achieve through digital. For many governments, digitization has consisted mainly of creating digital versions of existing processes and services, for example coding existing policy as business rules, replacing paper forms with webforms or automating customer service processes. Although this offers efficiency savings, services remain siloed by department and duplication of data, technology, and process is common across governments. 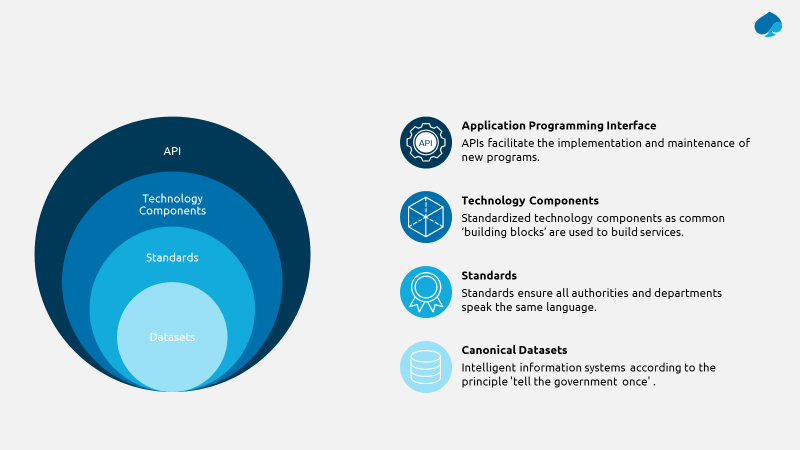 Governments are leveraging technology to reimagine what it means to deliver public services, establishing common “building blocks” such as canonical datasets, standards, APIs, and technology components upon which to build services. These components can be built and fixed once and used to build effective citizen-facing services. Leading governments including Estonia are completely redesigning their governments around digital technology; for example, Estonia’s X-Road platform effectively links all departments’ information systems so that citizens can “tell the government once” about a life event, as opposed to having to deal separately with different departments. However, definitions and applications of GaaP differ across borders, demonstrated by the varying ways the governments of the UK, the Netherlands and Germany have adopted platforms.

The Government Digital Service was created in 2012 by the Cabinet Office to lead digital transformation across government, and pioneered the concept of GaaP. The initial focus was on accessibility for citizens, with GOV.UK providing citizens with a single government portal for accessing services and policy guidance. Subsequently, the emphasis has shifted to improved efficiency within government, with GDS creating common building blocks that departments can reuse to build services. Examples include GOV.UK Pay, which provides departments with a common payment solution and GOV.Notify, which provides a solution to send text notifications to citizens.

Netherlands – eID as a cornerstone

In the Netherlands, the GaaP concept has been applied by the creation of central government websites such as Overheid.nl (overarching portal), Rijksoverheid.nl (central government portal), and Ondernemersplein.nl (specifically targeting entrepreneurs). These portals provide users with information to guide them to the websites of responsible administrations to obtain services. From a GaaP perspective, the country prioritized secure online authentication as a key building block. The use of an electronic government ID is the status quo for administrations and users, with 80% of the entire population having a “DigiD.” The country’s national eID serves uniformization, linking government organizations in various public sectors and across different layers of government.

In Germany, Government-as-a-Platform takes the form of the Portalverbund (portal network). The Portalverbund reflects the federal structure of Germany and intelligently links the different administration portals from federal, state, and local authorities to one network so that citizens and businesses can find any of the 575 government services currently digitized through the Law for the Improvement of Online Access to Administration Services. The portal serves as an informational signpost directing citizens to whichever authority carries out the services, regardless of which landing page they access through. The sharing of data in a decentralized manner is ensured by requiring all administrative portals to provide similar search and pay components as well as user accounts and a mailing function. At the moment, the federal administrative portal bund.de is online as a beta version and provides illustrative examples to give an impression of how the portal will work in the future.

GOV.UK, the Dutch Overheid.nl, and the German platform bund.de all provide citizens and businesses with a government portal for accessing digital services and policy guidance. Still, there is a major difference in the basic concept of these platforms. While the UK version can be seen as a single source of truth for digital public services, the Dutch and German platform solutions are more a network of several sources of truth. An important difference also lies in the way these platforms use common building blocks and basic services. In the UK, for example, the GOV.UK Pay solution can be directly copied and used in the creation of services, whereas in Germany, the focus is more on sharing reliable data (orchestrated across government layers), while the technical functions can still differ in their design across portals at federal, state, and local levels. In the Netherlands, uniform solutions do not directly aim at standardized service delivery, but mostly at a single way of authentication. 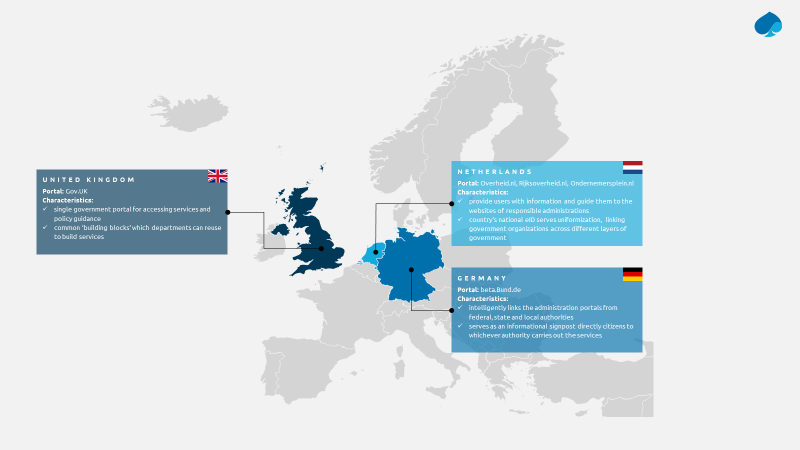 We believe we are only seeing the beginning of how governments can use technology to transform how they interact with citizens. However, there remain several key blockers that governments must overcome to fully realize the benefits: