In the recent past we have seen a spurt in the number of clients asking for SRE services. In some cases it was a very conscious and explicit ask for SRE services, while in others it was more of an implicit ask for similar outcomes without really calling it out as SRE. This article, co-authored with Manoj Tharwani, aims at putting across our point of view on what SRE is. While this may be just a teaser, feel free to reach out to us in case you are looking for more details. At Capgemini, we have invested in building this capability that is enabling us to implement this concept at several of our clients.

Introduction
In simple terms, reliability is defined as the probability of success. However, in the application world reliability is talked about in terms of availability and measured in context of the frequency of failures. Reliability is important as it can help build or lose confidence in a product and an organization’s brand reputation.

Especially with the current IT system landscape that typically comprises of several moving parts and a multi-cloud-based setup that poses even more complexity, a traditional approach based on the philosophy of “prevent system from failing” doesn’t quite work. With that many moving parts, there is bound to be a disruption somewhere, resulting in failures. The philosophy hence needs to be more like “expect failures to happen; build systems that are resilient to these failures”. That is where the concept of SRE or Site Reliability Engineering (a.k.a Service Reliability Engineering) kicks in.
SRE is all about applying a software engineering mindset to system administration. As a software engineer, you look at the business requirements and develop the system. Likewise, an SRE needs to look at how each disruption can affect the business requirement and then find a solution for it accordingly.
Agile-focused, product-driven approach and IT – OT integration have been key drivers for the growing demand for SRE today.

Originating at Google as early as 2003, the concept started with a team tasked with the responsibility of maintaining Google’s website “as available as possible”. They did that by simply applying the software engineering concepts to system administration topics – which later formed the basic tenets of SRE, as described in the online book published by Google.
Like most enterprise constructs, one does not need to “mimic” the same methods as done by Google. While you need to assess these practices in the context of your enterprise, there are certain basic tenets of SRE that must be followed:

DevOps vs SRE
One obvious question that often gets raised, is about the crossover between SRE and DevOps, and rightly so. There is a significant overlap between the 2 concepts. Both tend to address the silos between “dev” and “ops”. Also, in terms of practices followed, there are a lot of parallels. However, the approach and objectives are quite different in both cases.

We have seen several cases in the recent past, where in spite of having complete DevOps implementation, companies continue to bleed millions of dollars when their core systems go down – SRE will help plug that gap!

We believe SRE is not different, but in fact see it as a natural evolution of the DevOps maturity model, as depicted in the graphic below: 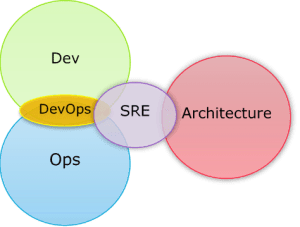 Another aspect worth mentioning is around the scope of SRE. While the DevOps concept, focusses on bridging the gap between “development” and “operations” teams, SRE extends that further by bringing in the focus on architecture as well. This ensures that the system resiliency is built into the system by-design so as to quickly react and recover from unexpected disruptions.

What would it really take to be an SRE?
SREs are expected to cover the entire spectrum of IT systems – it combines deep awareness of technical infrastructure, operating systems and computer networking with an attention to higher-level service level objectives (SLOs) to maintain a focus on business-relevant activities.
They focus on solving problems by building software components or features which prohibit the problem to re-occur in future (if not, then at-least making it less painful). It is thus often recommended that the SREs come from a software engineering background with some awareness of operations, rather than the other way around.
Following technical skills are required from this role:

Additionally, non-technical skills such as problem-solving, teamwork, working under pressure, and strong written and verbal communications are key to their success.

Conclusion
Every enterprise – large or small, at any given point in time has multiple applications under development and code deployments (and re-deployments). A lot of these enterprises have a mix of legacy and modern applications, supported by separate Development and Operations team. While DevOps ensures a smooth, automated, pipeline-driven approach to these deployments, there needs a dedicated focus on ensuring the availability of end-to-end business functions. This is what exactly SRE’s brings to the forefront and garnering a lot of interest in the industry.

For more details on our SRE service offerings, please feel free to reach out to me or Clifton Menezes and we will be happy to collaborate with you in your journey towards keeping the lights on, the SRE way!

Is a lack of capability and skills holding back the transition to new business models in energy & utilities?

The stark reality of the climate crisis is forcing urgent change across all sectors. Some...

Is a lack of capability and skills holding back the transition to new business models in energy & utilities?
Healthcare

Healthcare is on the move, transforming itself from a largely reactive, resource intensive...