It’s not always easy being a sports fan. Your emotions are tied to the success or failure of your favorite team. But this is part of what makes fans special – their passion for their teams and their strong and loyal bond with those they follow.

However, while that relationship has been deep and binding for many years, digital technologies actually offer a new opportunity to make that bond even more engaging, immersive, and rewarding for all. There has been a change in the way that fans consume their favorite sports.  They are no longer just content to be passive spectators – they want to be part of the experience. Emerging technologies such as AR/VR, artificial intelligence, and biometrics can transform the fan experience, both inside and outside the stadium.

The latest report from the Capgemini Research Institute, Emerging Technologies in Sports, reveals how the landscape is changing:

Our research found that globally, over two-thirds of fans (69%) feel that the use of emerging technologies in sports has enhanced their overall viewing experience. For example, a mobile-based app can present on-demand statistics and insights simply by pointing the camera at a player.

Emerging technologies can also help address some of the traditional pain points that come with big sporting events, from long queues to congested parking. In contrast, the Mercedes Benz Stadium in Atlanta, designed for American football, is creating an optimal fan experience through technologies. Its fan app has a range of features designed to deliver a smoother fan experience. This ranges from delivering parking information in real time to seamless digital ticketing.[1] As our chart below shows, fans prize a range of interactions when in a stadium, from regular match updates to ordering food that is then delivered to their seat. 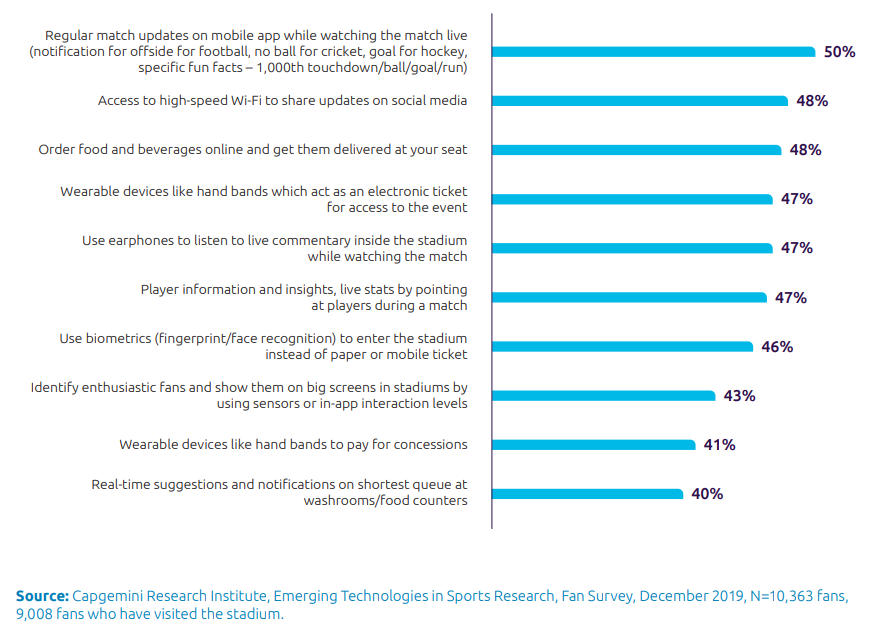 Immersion and engagement outside the stadium

Emerging technologies also power deeper engagement with fans. Followers of the New Zealand Rugby team can use Amazon Alexa-enabled devices to obtain match information, access behind-the-scenes content, learn more the team’s history, or play a quiz about the All Blacks team. The team partnered with a digital design agency to create this feature for increasing engagement with fans.[3] Hotstar, an Indian OTT streaming service, uses gamification in “Watch’NPlay” to increase fan engagement during live cricket matches as part of the Indian Premier League (IPL). Fans can predict the result of the next ball and answer cricket trivia to win points, which they can redeem with various brands.[4] Take-up has been significant:  64 million viewers participated in Watch‘NPlay during the IPL season in 2019. This is twice the number of fans when compared to IPL season in 2018.[5]

A digital performance: from live sports to other live events

Transforming fans from spectators to active participants is not limited to live sports. Coldplay, the British rock band, partnered with Xyloband to offer their fans LED wristbands. The bands, which act as concert tickets, are radio enabled. The LED colors in the wristband can be controlled centrally by the show’s designers, making all fans an integral part of a light show that is in sync with the live performance.[6]

Getting this right has considerable upside. A positive experience with technology, either in or out of the stadium, has a significant positive impact on fan engagement. What should organizations do to adopt and optimize these emerging technologies in sports? Read the latest research on Emerging Technologies in sports to learn more.

Technovision’s 2021 framework is a handy utility for architects to devise effective solutions...

Learn how to stay on top of Business Trends and be as adaptable as water.