Technology is changing the game quickly and will continue to do so. Technology is reaching every corner of our world and it is bringing rigorous changes to every industry, every organisation, its processes and people. Public sector included. And the future won’t be different. It is not very clear though which technologies will make what impact; predicting future technologies provides very engaging over-the-horizon figments of imagination, but misses the robustness and reliability that public sector can actually build on. No one can actually predict what government could look like in the next ten years. The only thing that is certain is that it will be very different from how it looks now. The biggest challenge is, therefore, not so much in anticipating what comes next, but ensuring governments are able to deal with the change.

Digital is not yet in the DNA of governments. The latest eGovernment Benchmark that we have delivered for the European Commission reveals that countries’ performance is not revolutionarily improving. Even worse: while a ‘digital diagonal’ of countries is improving, the gap with those who are behind the European average is growing. New technologies such as mobile are incorporated slowly and in only a few countries in a consistent cross-agency approach. Digitisation of public authorities themselves is either in embryonic state or is happening in silos. We have seen some inspiring examples of new ‘business models’ for governments, such as a crowdsourced eGovernment solutions map or public-private collaboration on authentication mechanisms – but they are not common practice. The policy priorities of the consecutive eGovern­ment action plans have not changed much since the 2010 eGovernment Action Plan that was launched in 2006; now ten years ago. In all honesty, we could doubt to what extent public sector has re­ally advanced over the years in acquiring an attitude that can deliver on the potential of digital. In the words of the UK Govern­ment Digital Services’ Executive Director, Stephen Foreshew-Cain: ‘The biggest problem we face is re-shaping ourselves so that we’re better placed to change as rapidly as the world around us[1].’

Our Digital Transformation Framework provides guidance for exactly that purpose. Research of Capgemini and MIT[2] conducted in the field of digital transfor­mation learns that so-called ‘digital mas­ters’ excel in two critical dimensions: the what of technology (digital capabilities) and the how of leading change (leadership capabilities). Evidence shows businesses that perform well on both dimensions are receiving higher revenues from their physical assets and are also more profit­able than their industry peers. In parallel, this mechanism is likely to be true for public organisations with regard to their cost ef­ficiency and realisation of public value.

■ Digital capabilities: A set of digital transformation elements implemented by the organisation, including the strategic assets and digital investments that are used to create those elements. The research showed executives are digitally transforming three key areas of their organisations: user experience, operational processes and business models. Within each of the three pillars, dif­ferent elements are changing. These nine elements form a set of building blocks for digital transformation. No organisation in the research sample fully transformed all nine elements. Rather, executives are selecting among these building blocks to move forward in the manner that they believe is right for their organisations.

■ Leadership capabilities: The way in which senior executives drive change throughout the organisation. This includes creating and communicat­ing vision, establishing governance and measurement mechanisms, and building a digital-ready culture. These serve as means for leaders to ensure that building blocks are built effectively and that the organisation has the skills and culture to drive (public) value from them.

I started this chapter by stating that technology is changing the game quickly and will continue to do so, and that the big­gest challenge is therefore not so much in anticipating what comes next, but ensuring governments are able to deal with the change. Digital transformation of government – the sub title of the new eGovernment Action plan – can only be realised through build­ing digital capabilities and effective digital leadership, supported by an adequately skilled public apparatus. This should be high on every public leader’s agenda. If so, this could indeed proof to be the turning point for eGovernment development in Europe.

This blog post is the first in a series of blogs that puts the results of the eGovernment Benchmark in the context of digital transformation of public sector. The following blogs will illustrate the need for each building block and present examples of how it can be successfully implemented. 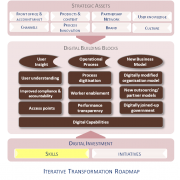 Test and Protect: my experience of working on Scotland’s contact tracing system
Show all