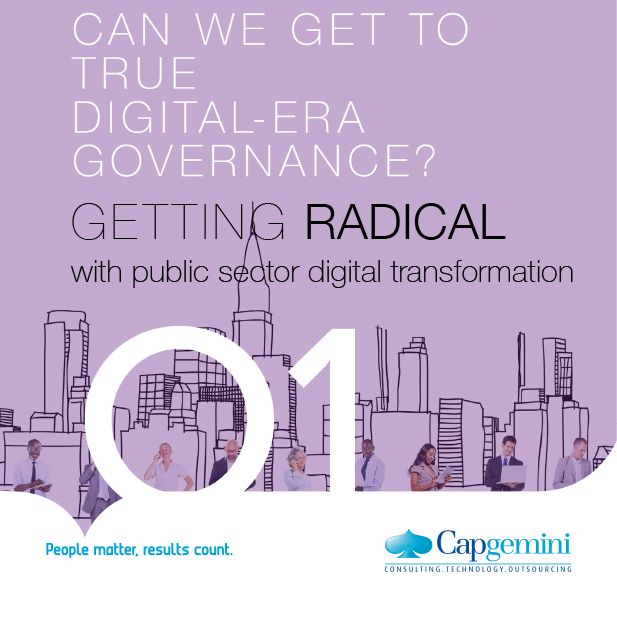 Some government departments are working hard to achieve radical transformation in order to deliver improved government services, focusing on customer needs. However, in order to deliver true citizen centricity they will need to take a genuinely radical leap forward in achieving the digital agenda. This paper examines why and how.

For some years it’s been evident that government needs to think differently about how citizens engage with public agencies, when they engage, and why – and then use digital technology to reorganize public services around the citizen.

Some departments are already great exemplars of “digital-era governance”, as it has been called[1]. Many, however, continue to shape developments around their own organization, rather than around citizen services and needs. For the sake of delivering better services to citizens and enabling a more efficient government, that picture must change.

In recent years, developments in networking and connectivity have brought huge transformation to business and personal lives alike. But government, in many cases, has not embraced this change. A 2015 report from the World Economic Forum argues that, to address this gap, “A new model of government, based on the digital and software platform, is [urgently needed], and will eventually redefine the relationship between governments and their people.”[2]

A NEW RELATIONSHIP BETWEEN GOVERNMENT AND CITIZENS

What should this model look like? It’s likely to be a network of digital components, drawing citizens and government closer together and enabling citizens to gain seamless access to a range of government services.

The new relationship between government and citizens should start by putting the citizen – not government – at the heart of public sector thinking. Services can then be built around the needs of citizens in a joined-up way that enables them to interact in a way that is meaningful to their own lives.

The new relationship has to be built on two foundations: the citizen lifecycle and government-wide processing of interactions.

The public sector needs a deep understanding of:

Why citizens need to interact with government

We’re talking here about “joining the dots” to integrate the government’s internal processing of each citizen interaction, from initial contact through to delivery of the service. This should create greater value for government, and a lower cost to serve. Service provision should be seamless and transparent, regardless of the number of government departments involved.

With those two foundations in place, your organization can start delivering radically improved services and choices to citizens. The ultimate goal is to build services that join up for the citizen across government departments.

Many current digital initiatives are specific to the remit of an individual department and its need for transactional improvements, instead of being based around real user needs and the citizen’s life events. These approaches are ineffective because they focus on individual transactions within a department rather than on citizen events.

For example, consider a family moving to new home, a new child arriving, or an individual entering the world of work for the first time. Currently each of these events triggers many segregated interactions with multiple government departments. Each contact adds effort and delay for the citizen; for government, it means cost, complexity, and duplication.

From the citizen’s point of view, it doesn’t make sense that a life event triggers multiple interactions. There is just one government, and providing government with the required information once should be enough. In other words, the biggest opportunity is the cross-government approach.

To make radical improvements, each government department or agency should consider not only a specific interaction that needs to be improved, but also the whole context of that interaction. This involves asking what the citizen is trying to achieve, what life event has triggered the interaction, and which related government services may be needed, and then creating a user experience that seamlessly and efficiently transacts across multiple government bodies.

For government agencies benefits include:

For citizens benefits include:

This would represent a leap forward towards a joined-up government. At key moments in their lives, such as having children, getting married, starting a business or moving to a new home, citizens would simply notify government once. The same would be true of events in a business’s life cycle.

This focus on the end-to-end transaction flow instead of on individual interactions is the “radical” approach needed.

We’re currently recruiting, so if you’d like to be part of Capgemini’s Public Sector Digital team, take a look at our opportunities.

Test and Protect: my experience of working on Scotland’s contact tracing system
Strategy and Transformation

The buzz for mastering technology development is getting serious!

There are specific technologies that clearly show their transformative power, even in the...

The buzz for mastering technology development is getting serious!
Show all