Over the last month two close friends of mine have left their corporate careers to follow other, less traditional opportunities. One has joined a start-up on the other side of the globe. The other has chosen to work as a location independent freelancer, in order to focus her energies on a social cause close to her heart. These are two examples within a much broader trend that is being referred to as the future of work.

There are a number of definitions floating around for the future of work. My favorite is “a blend of technology and social drivers are creating the conditions for a radical rethink of what it means to work.” I believe this affects all aspects of work from the purpose and outcomes of work, the sorts of work we do, the way we organize it, the tools we use and the locations we choose to work within.

Over the course of this short series of blogs, we will look at:

Across all of these, we will ask the questions what is changing and what does this mean for large organizations of today.

The Digitalisation Effect and the Evolving Jobs Market

In a book called The New Division of Labour, Levy and Murnane mapped a set of information processing tasks along a spectrum from simple arithmetic on one end, followed by more complicated algorithms such as predicting mortgage payback. At the other end of the spectrum were activities such as pattern recognition, communicating with natural language and detecting sarcasm. Traditionally computers have only been strong in the first couple of activities, leaving the other end of the spectrum as the domain for humans.

Driven by the continued progress of Moore’s Law, we are seeing a shift in the activities that computers can be expected to deliver. Progress in fields such as Machine Learning and Robotics are making it possible for computers to start tackling the more complex information processing tasks. For example, we are already seeing:

As these trends continue they will have a profound impact on the workforce. This simple graphic from Frey & Osbourne’s The Future of Employment neatly shows how digital technologies are entering traditionally human areas of work. 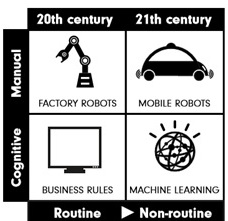 This is not a new phenomenon. Many times before we have seen new technologies disrupt the workplace. Schumpeter, the 20th century economist, coined the phrase Creative Disruption recognising the disruptive force of new technologies along with a complimentary creative force. For example, in the early 20th century America had a large number of people employed in the piano making industry. The piano was the living room entertainment item of choice for the new American middle classes. However, as the popularity of the television grew, the number of people involved in making pianos reduced significantly to be replaced by people manufacturing the televisions and in the newly created broadcasting industry.

The digitisation effect is creating a new wave of Schumpeter Creative Disruption that will cause a further evolution in the jobs market. It will be interesting to see the new roles that emerge from the creative force.

Reinventing the IT channel for digital Innovation
Digital Manufacturing

It’s time for a reset; to achieve transparency across all business functions related to...

Smart supply chain in the intelligent enterprise
Show all