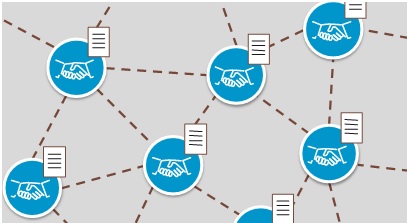 Blockchain is a revolutionary cryptographic technology that allows people to make transactions without the need of a trusted third party. The transactions are logged in a distributed ledger that is completely controlled by the combined effort of its users. This makes the blockchain ledger fundamentally different from a traditional ledger which is maintained and updated by a central authority. By means of a clever use of cryptographic algorithms this can be carried out in a safe way without requiring you to trust the conduct of its users. The technology allows for much faster, cheaper and more secure transactions. For example, in payments, stock exchange, property exchange, currency exchange, commodity exchange etc. Therefore, blockchain technology is expected to cause a mayor industry-wide disruption within the coming decade. [1]

The blockchain is a distributed ledger that is composed of sequential blocks each containing the transactions from a small time frame. All the blocks together contain all the transaction of the system ever made on chronological order. Every user has a copy of the entire blockchain. When a new transaction is made, the transaction, first verified by the receiver, needs to be assigned to a new block of transactions that is placed behind the latest block. New blocks are added by miners. The new block has to fulfill certain requirements before it is accepted by the network with the purpose of decentralizing the power of miners and preventing miners from dishonest behavior such as performing a double spend attack. [2]

In BitCoin, [3] the first blockchain based cryptocurrency, the criterion for a miner to add a new block is providing the solution of a computationally difficulty (i.e. expensive) problem that is given in the previous block (i.e. mining). This problem is solved by the combined computational effort of all the miners in the network. It is designed such that the solution will be found on average every ten minutes but it is unpredictable which miner will find it. This mechanism which protects the blockchain against attacks from malicious miners is called the proof of work (PoW) principle. The method is relatively save and easy to understand. However there are several concerns. First of all, PoW mechanism is, although much faster than traditional payments, inherently time-limited (~10min. for BitCoin). Secondly and more importantly, the power consumption of mining can spiral out of control. For example the power consumed by mining BitCoin from the 2009 until 2014 is equal to the amount of energy that is needed to light up to Eiffel Tower for 260 years. [4] Having said that, in the last two years the computational power has increased by a factor of 2000! [5] This limits the growth of the blockchain network making it expensive to implement blockchain technology in large systems.

Therefore, recently, several alternative methods for validating blocks have been proposed that do not use the PoW principle. The most important alternative is called the proof-of-stake (PoS) mechanism. In this case the miners, which are referred to as voters in PoS, do not solve a computationally expensive problem. Instead their chance for submitting a new block is determined by the share of coins/value of voters in the network. The PoS mechanism has some mayor benefits. First, it is much faster allowing for adding new blocks within seconds. Secondly, it is potentially safer because it is even more difficult for a malicious miner/voter to attack the blockchain. Thirdly, maintaining the system does not require an outrageous energy bill. Making a PoS blockchain a more sustainable and greener blockchain and, more importantly, allows for scalability.

There are, however, some technical concerns about the stability of a PoS blockchain. This is because the PoS principle creates an incentive for voters to built multiple branches of the blockchain that is also known as the nothing at stake problem. Many efforts have been made to remove this incentive by using different variations of PoS principle.

Recently, Etherium published on their website that they found an algorithm that uses the PoS principle but circumvents the nothing at stake problem. [6]

They are so convinced about the solution that they announced to switch from PoW to PoS. This has a strong impact on the miners because they no longer require advanced hardware and a lot of energy to mine. However, this new algorithm also opens the opportunity to implement Blockchain in much larger systems and therefore allows for competing with virtually any transaction system that is now maintained centrally.

Client Landscape in the SAP S/4 HANA Roadmap—Where does it fit and what‘s the direction?

A deep dive into a sample client landscape understanding the processes in line to the latest...

Client Landscape in the SAP S/4 HANA Roadmap—Where does it fit and what‘s the direction?
Show all