In early May I attended Microsoft Ignite 2015 in Chicago – with over 22,000 attendees probably Microsoft’s biggest conference ever. This was the inaugural edition of the conference, which combines and replaces a number of other big events such as TechEd and the SharePoint Conference. It reflects Microsoft’s ambition to emphasize how their products integrate and the shared vision behind all of them.
Ignite directly followed the Build conference (for Developers) which remains separate and had important announcements of its own. To name just a few important ones:

The Build conference was followed by even more announcements at the much larger Microsoft Ignite. I definitely have not captured all announcements for each product (with nearly 700 sessions that would be quite a challenge), so this is just my take on the major news presented in Chicago, focusing mostly on Office 365 and SharePoint.

The keynote was a confirmation that in a cloud-first and mobile-first world, Microsoft will be all about devices, cloud and hybrid scenarios. Satya Nadella’s key message was that Microsoft sees IT as being at the intersection of three areas that will get all of Microsoft’s attention in the near future: 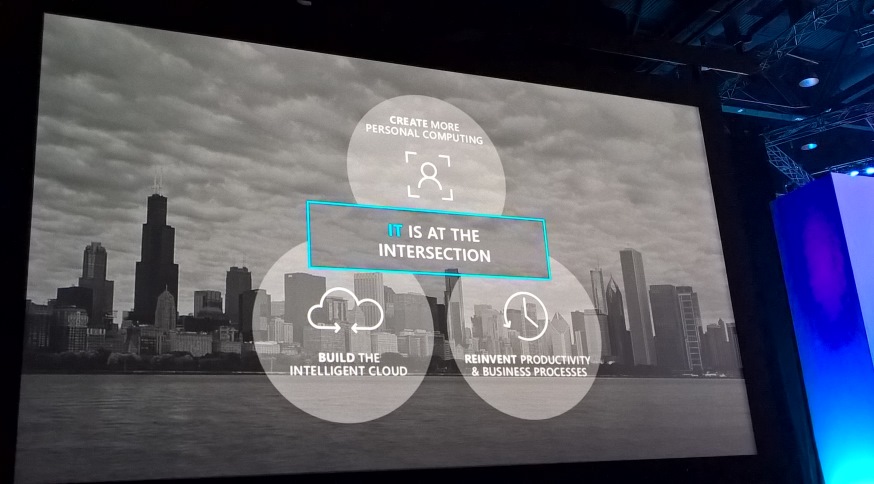 Overall no major shockers during the keynote, but there were several cool demos on collaboration and productivity using Windows 10 and Skype for Business (formerly known as Lync) amongst other things.

Although already announced before Ignite, the number of sessions around Nano server revealed the importance: a GUI-less version of Windows server with an incredibly small footprint (500 MB deployment running with on just 128 MB RAM), born to run in the cloud and to be controlled remote only.

You want your own Microsoft cloud? Well rejoice, you can have your own Azure now: Azure Stack lets you run an on premise version of Azure in your data center, with the exact same admin interface as the Microsoft cloud version. This of courses eases any future step to migrate to Microsoft Azure, so it’s a way for Microsoft to meet customer’s need to stay on premise, while still getting ready for the cloud.
It should of course also be pointed out that this is not intended to run on a few servers, so you will still need some substantial hardware to run Azure Stack. The licensing model is still to be announced.
Note that Azure Stack differs from the existing Azure Pack, which still greatly relies on System Center functionality. Azure Stack doesn’t only replicate the Azure experience but also the underlying services, the management model as well as the datacenter infrastructure, so it’s much more similar to the real Azure.

It will be interesting to see what this means for Microsoft’s existing Cloud Platform System (CPS) offering, which is only sold as a combination of hardware (Dell) and software (Azure Pack). I was told by a Microsoft product manager at Ignite that at some point in time existing CPS deployments would also run using Azure Stack, but no details or concrete timeline could be given at this time.

Ignite was also the long awaited moment for the first real announcements around SharePoint 2016, the newest on premise version of the product. Many people were expecting a release date around end of 2015, but as it turns out this will only be a public beta, with the actual RTM release planned for Q2 2016. As the Microsoft Product Managers kept emphasizing, there is still plenty of work to be done, even though some key changes of the new SharePoint version have now been announced.

Those announcements were even more concrete than many had expected. The openness around new features that weren’t even built in the new product yet is unprecedented for Microsoft, who tend to keep their cards close to their chest and only disclose this kind of detail to a small selected group of people in a Technology Adoption Program (TAP).

If you still need more information I suggest you read this blog post by Bill Baer who presented most of the new features at Ignite.

Even though I didn’t hear any major new announcements, what was clear is that Yammer is here to stay. It still feels somewhat separate from the other Microsoft products at the moment, but Microsoft and the Yammer team are working hard on better integration into Office 365 / SharePoint.
One key recommendation I heard was to use the Yammer Embed app whenever you can, this app is a first class citizen which also has Single Sign-On capability (but only if you have Yammer Enterprise).

Microsoft is all about being open to other technologies these days. They have always been involved in open source development, but currently I dare say that Microsoft has suddenly become the most open / cross-platform of the technology giants. It was good to see that the Ignite conference app was available not only for Windows Phone, but also for Android and iOS.

The cross-platform mind-set is very visible in OneDrive for Business as well. This is supported on many operating systems already, and one announcement at Ignite was the PDF support to be added for Android and iOS in Q2 2015. Also the soon to be released mobile offline file capability will be available for Android and iOS (although read-only for Android and iOS, while editing is possible for Windows Phone).
In Q3 2015 all the look & feel bells and whistles from the consumer version of OneDrive will be brought to the business version. This is an important sign that Microsoft gets the consumerization of IT; instead of dismissing the consumer tools it’s much better to embrace them, since in the end business users are just consumers as well.

Then in Q4 2015 we will see the long awaited new sync client for OneDrive for Business (the preview for both PC and Mac will arrive in Q3 2015). The current one is not really known for its reliability, especially when you start synching larger amounts of files. The new sync client will be a Windows 10 Universal App which promises to fix all of this and at the same time removes the sync limit of 20,000 files.

I think Microsoft did a pretty good job of organizing and aligning the content, which can’t be easy for a conference of this size, especially with so many different product teams involved. The majority of sessions were quite interesting, there were important announcements and there was definitely a good vibe around the whole conference. As I’ve heard several people say already: Microsoft is becoming cool again.
Most sessions aligned in some way to the shared vision expressed in the keynote. If I compare the three focus areas (Personal Computing, Intelligent Cloud, Reinvent Productivity) with the content I’ve seen during Ignite, it’s probably the Intelligent Cloud where Microsoft is currently at its strongest with developments like Delve and Machine Learning.

So do I miss the old SharePoint Conference? There was of course less time available for in-depth sessions on each different product, so there is a small void to be filled here. Still this was a powerful inaugural edition of Ignite, which sounds promising for next year when Ignite will hit Chicago again in May. 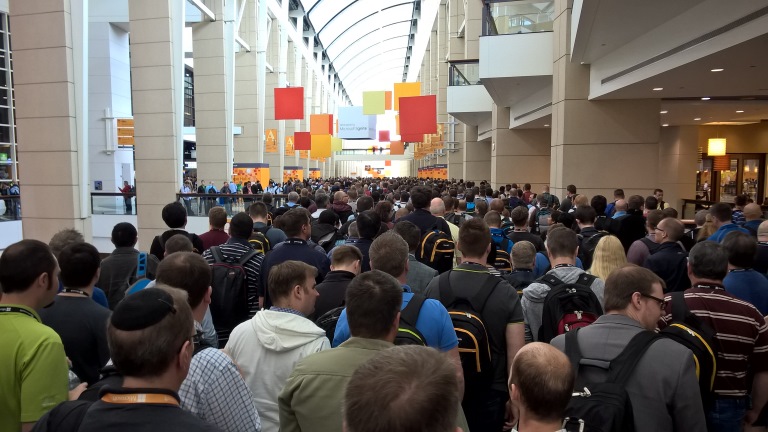 On target! How to ensure your marketing gets results
Show all