For all those who need a refresh, here are Bill Gates’ two rules:

This is an old quote but it still makes a lot of sense. However, the rise of Robotic Process Automation (RPA) within Business Process Outsourcing (BPO) might tempt some to cut corners.

I don’t think anyone can argue with the first rule. It’s the second rule that some people are challenging. They may see automation as a quick fix to the problem of inefficient processes – a sticking plaster alternative to a big, disruptive, transformational change project.

I also think that RPA is a good thing, but I want to flag why we should be more wary than ever of breaking Bill Gates’ second rule. 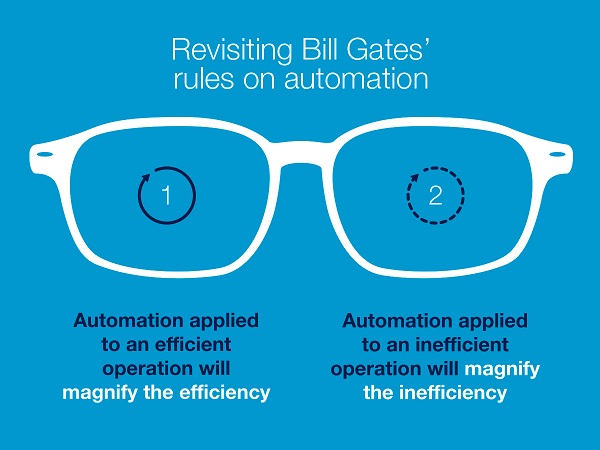 To make sure that we are talking about the same things, I have started with some definitions.

What is Robotic Process Automation (RPA)?

RPA is the use of software ‘robots’ to automate manual steps in a process that may be repetitive and managed by rules.

Many of the tasks delivered by BPO service providers involve people keying, checking, validating, aggregating and rekeying data.  Therefore, RPA has multiple opportunities in our industry.  In essence, it can create a virtual workforce working with extreme efficiency and accuracy on the activities that they are employed to deliver.

Let’s take an example of a complicated network of interfaced software systems that a lot of companies rely on.

There are often significant inefficiencies in the processing level where you may have to rekey entries between one system and another. Alternatively, there may be a step where one employee needs to extract information and email it to another team for them to re-enter it into a different system or spreadsheet.

The ultimate solution is, of course, to upgrade the software systems and remove the inefficient steps. But interfering with the main ‘Big IT’ system can be expensive, time-consuming and risky.

Rather than embark on such a daunting project, RPA can be applied as a kind of ‘non-invasive surgery’, at a fraction of the upgrade cost. In effect, it can make these large software systems more accurate, more manageable and more cost effective.

The future of process efficiency is not sticking plaster automation

It’s true that RPA can act as a great quick fix to reduce cost and improve accuracy – we’re seeing a number of examples where the time and cost of deeper change is prohibitive within a given budget cycle or other short term constraints.

However, if you used RPA to shore up creaking business processes there is a risk that over the long term, you would still eventually come unstuck. This mindset has the potential to mask the inefficiencies that can make a powerful business case for change, effectively institutionalising poor practices and inhibiting the necessary change for good in an organisation.

Let’s take another example where you have a poorly designed or outmoded customer interaction process in your business. You know it takes longer and costs more money than it should, so you automate some parts of the process. This is a relatively easy win to take costs out, but you’re not really tackling the key outcomes from that business process i.e. better customer experience leading to improved loyalty, sales growth etc. I worry that in a situation like this, the siren song of automation could lead an organisation onto the wrong path.

We see RPA best put to use after simplifying and standardising the business processes to magnify the efficiency, whilst leading to improved effectiveness, control and business value.

Perhaps unsurprisingly, yes. I believe that you rewrite these rules at your peril. There is no quick and easy way to fix an inefficient operation for the long term. RPA may not magnify the inefficiency, but it may hide fundamental problems until it is too late. Use it wisely!

Future-proofing the supply chain – the role of digital transformation

Every organization can benefit from partnering with a service provider to accelerate its...

Want digital transformation success? Then preparation is key…
Show all