Ant or Lion? Which would win in a fight?  How about all of the ants Vs all of the lions?

Zoom forward 100 years – how about a swarm of nanobots Vs a Transformer robot?

There is a concept in ecology called the Biomass Pyramid.  It is a visual representation of the mass or productivity at each level of a trophic system.  The apex predator group, like lions, require considerably more biomass at the bottom of a pyramid to support it.

Furthermore, it’s a pyramid because there is considerable energy loss as we move up through the pyramid, it is inefficient. 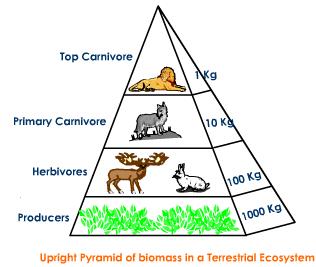 Now come back to the present – What about your organisation, and let’s think about information rather than biomass – Does the boardroom beat the shop floor?  Which has more collective knowledge?

You could draw a similar pyramid for your organisation with the customers at the ‘Producer’ level and external facing employees just above that perhaps.  The boardroom would be at the tip of the pyramid.  The vast majority of the information and decisions are happening down at the low level, not in the boardroom.

The efficiency point holds up too, as information travels up the pyramid there is an efficiency loss;  there is loss of data granularity, currency, and loss of meaning.  The trip back down of the pyramid with decisions is equally inefficient; the Chinese whispers effect.

In fact, the vast majority of information and decisions in any organisation are taken at the ‘lower’ levels of an organisation.

Takeaway 1: Your Business Information should focus on information and decisions at the lowest organisational levels

How Do you Do This

So how do you optimise behaviours at the lowest level so that information and actions are optimal?  The first thing to recognise is that behaviour and the way information is exchanged changes with the trophic level.  In the environment top level organisms have large brains and are typically considered to be conscious, they also tend to collaborate in relatively small sophisticated social communities.

At the lower levels the communities are larger, a colony or a forest, and the individual entities are less sophisticated and are maybe even not sentient, flora for example.    However – this doesn’t mean that highly optimised decisions are not taken continually – look at bee colonies and the seasonal pollination cycle for example.

The analogy holds to a business organisation – those at the top have, if not bigger brains, more experience and knowledge of the business.

I’m fascinated by the efficient problem solving that natural systems exhibit and the complexity that emerges.  I don’t think this is confined to nature but it is also exhibited in economies and human social constructs – the internet or a business for example.

As Bonabeau Théraulaz put it in ‘Swarm Smarts’ in Scientific American (1);

“Each insect in a colony seems to have its own agenda, and yet the group as a whole appears to be highly organized”

Swarming is an example of emergent complexity,  it’s a collective behaviour demonstrated by a group of similar animals to achieve a common objective.  As a more abstract definition I like that given by Wikipedia:

“Swarm behaviour is the collective motion of a large number of self-propelled entities…. From the perspective of the mathematical modeller, it is an emergent behaviour arising from simple rules that are followed by individuals and does not involve any central coordination.”

Twitter  demonstrates swarm behaviour.  The emergent complexity of the internet has led people to speculate on whether the Internet is actually conscious and most would agree that it demonstrates intelligence.

I propose that organisations at the lowest level, that of the customer and other stakeholder interactions – the ‘shop floor’, are primarily driven by swarming characteristics….  And if so then follows that we should direct our business architecture efforts – and those at information architecture in particular – at the behavioural determinants of the swarm that enable it to self organise efficiently in line with an organisation’s objectives.

Takeaway 3: Behaviour at lower organisational levels is characterised by swarms

The inspiration for this paper came from the news in the summer that scientists Harvard have created the world’s largest ‘hive mind’ with 1,024 simple robots that are able to self organise to accomplish tasks like create letters (see picture).  They called them Kilobots (Which from a PR perspective is too close to Kill o bots in my view!). (2)

The hive mind robot is a completely different approach to robotics than the creation of a single intelligent robot, and given the nature parallel I think it might be much more successful, purely because the design rules are simpler – the complex bit emerges for free.

Gamification & The role of Motivation

So back to the human organisation – systems that work well as swarm systems – economies, or Facebook for example – are comprised of many people making self interested decisions that just happen to drive the existence of a complex system.

Individual motivation is clearly key.  With an Ant colony or a Kilobot this is programmed into the entity – it follows simple rules.   Humans on the other hand are more complicated, but I would suggest that the codification of human motivation is also possible and in the business world it is called Gamification.

Gamification is essentially the application of  people’s levers of motivation to induce them to perform efficiently within a system be it money, leaderboards, or the joy of helping.

Takeaway 4: Motivation at the entity level is a driving factor of the swarm, gamification provides the levers to address this

The role of Information

Within each swarm, system information exchange is key too, visual, oratory, olfactory, etc.  This is actually a constraining factor on the size and sophistication of a swarm though.  With no communication swarm behaviour is just not possible.  If a bird loses its sight then it isn’t going to be flying in a flock anymore…

But, here is where the opportunity in the modern business world goes exponential!

The big data explosion is all about the volume, variety, and velocity of available information.  The IoT means that every part of your supply chain can be a part of the swarm, social media extends your customer swarm, faster processing and mobile mean that the quality and speed of information to each team member is greater.  The Big Data revolution essentially removes a limiting factor on swarm size and effectiveness.

Takeaway 5: Information availability is a limiting factor of swarm effectiveness, and big data is changing the bounds of what is possible

In this paper I’ve suggested that decisions and information quality are superior at the lower levels of an organisation, mirroring the biomass pyramid found in ecological systems.

The way behaviour in modelled is considerably different at these lower levels, the volume of entities means that behaviour emerges from many small simple interactions – a swarm in effect.

Therefore the focus of business architects and designers of information systems should be on this lower level – the customers and ‘shop floor’, not the boardroom or the executives.

Motivation of actors is key, and gamification can address this.  Information availability constrains the sophistication and size of a swarm  – but big data means that this constraint is fading away, the time is now.

The real opportunity of big data is to enable bigger and more successful swarms.

When will your organisation become a Swarm Organisation?