AaaS part I: Decision making and the Data to Insight conversion rate
AaaS part II: The Tool-approach is something for the past
AaaS part III: Analytics-as-a-Service is the current best practice

Modern and feature-rich dashboards include forecasting capabilities like how far we can drive before refueling. It is valuable information that can lead to minor adjustments to your driving style, but it gives you no competitive advantage in terms of which turns to make on your way to your destination. This is where your navigation system plays a role. A modern navigation system (c.f. Google Maps and Waze which are built on top of Big Data) gives you a constantly updated optimal route between your current position and your destination. In fact, it considers an ever-every changing world e.g. traffic jams, temporary closed roads, speed traps and average speed of other cars traveling on your route.

Enterprises need to be able to quickly respond to an ever-changing world in order to stay competitive. A constantly changing world requires a constant flow of decisions – where even postponing a decision is a decision in itself. Hence, the value of analytics is not to be interpreted as merely a set of features in a tool; it is more of a set of principles for improving the process of your decision-making. 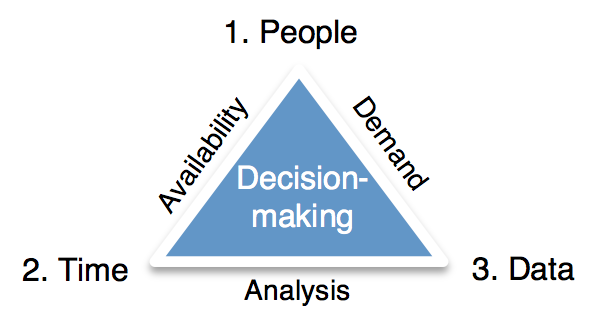 
These three factors are highly connected and if one improves one of these three factors it will often impact the other two factors negatively. As an example, the more critical a person is to a decision the lower chance it is that the decision maker is available during the optimal window when the decision should be made. Another example is that the more data you consider when making a decision, the more time it takes to convert that data into insights. Also, the volume and variety of data (i.e. big data) also increases the demand on decision makers to keep abreast with current information and data streams.
Let us for now exclude the organizational aspects and also the assignment of people to right roles, which is a matter of formulating and implementing an information strategy. What remains is time and data. Neither of these two factors can be manipulated in isolation. Hence, we should consider this duality when deciding for a metric to compare the value of various analytics solutions. Let us denote the metric as Data to insights conversion rate and use that as a metric for how effective an analytics solution is in converting data into insights.

In part two II and III of this topic I will use the data to insight conversion rate to reason around why the traditional tool-approach often fails to make significant improvement on the decision-making process, in contrast to Analytics-as-a-Service (AaaS).

Robo advisors and the Dutch banks: Strategically ignoring the hype or waiting for maturity?

Robo advisors and the Dutch banks: Strategically ignoring the hype or waiting for maturity?
CX

On target! How to ensure your marketing gets results
Financial Services

Simplifying the Letter of Credit issuance through Trust

A letter of credit (LC) is a contractual agreement between an issuing bank, on behalf of an...

Simplifying the Letter of Credit issuance through Trust
Show all