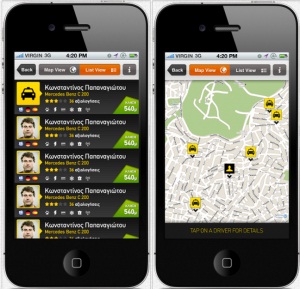 There were a lot of good startups at LeWeb . Startups hailing from northern Europe, Canada and the United States … but the most impressive startup was from Greece. Taxibeat, developed in Athens, helps users find taxis in cities major cities, from Paris, São Paulo and Rio to Bucharest and Oslo – with more and more cities being added.

It’s easy to use: when you launch the app, it locates your position, and when you need to find a cab, it contacts a driver near you. It shows you where the taxi is, what speed it’s arriving at. If it’s too slow, you can call the driver. Both taxis and customers are identifiable, which adds security and quality assurance.

In the first taxi I found with the app, the driver told me that he planned to use the app to work Saturday nights, a shift he normally avoids because of its risks. The wife of a friend said she’d feel safer in an identifiable taxi.

Quality assurance comes from the fact that anyone can rate anyone. Customers rate drivers and vice versa, so it’s easy to find the highest-rated options. The challenge is finding sufficient taxi drivers and customers to achieve the critical mass an app like this needs to really work.

On the startup side, the economic crisis has been a “competitive advantage,” says founder Nikos Drandakis. Besides  developers not demanding exorbitant salaries, taxi drivers have been happy to leverage smartphones to “recover most of the fares lost because of the crisis.”

On the customer side, outside my own experience using the app, Drandakis says that when the app became popular in Athens, it resulted in taxi drivers becoming much more courteous. They got out of the car to open doors for customers, in the hopes of being rated highly.

I can’t wait to see this in Paris.

“Inventive Insurer” mindset: The need of the hour for property insurers

Inventive Insurers focus from the outside in on the customer – their needs, expectations, and...

“Inventive Insurer” mindset: The need of the hour for property insurers
CIS

Connected Employee Experience services bring a new level of choice and flexibility to...

Employee experience measurement, a game changer in IT services delivery

Employee experience comprises a series of positive and negative events that generate...

Employee experience measurement, a game changer in IT services delivery
Show all