From New York to Shanghai, from industry think-tanks through to IT vendors, rumour has it, that the future of IT and, the role of our esteemed CIO is under threat and, all, from the perceived comfort a colleagues favorite smartphone near you.

Exit left Mr PC, your successor the Phablet has arrived!

Oh Please! Let me be the first to say, the smartphone and, the emergence of the tablet have had and will continue to have a profound effect on the way we do business over the coming decade. The emergence of BYOD (Bring your own device) strategies from phones to tablets and, from cloud-apps to personal PCs is diversifying the number of entrypoints into our corporate systems. Just don’t ask me to present the word ‘phablet’ in the boardroom with a straight face……

This is tantamount to the consumerization, externalization and democratization of IT which has been steadily evolving since the early days of Apple versus Wintel device supremacy debates, on to the proliferation of ‘Shadow IT’ in the business and then, through to the more recent emergence of the smartphone, and of course, the on-demand cloud-based collaboration applications that put user experience and ease of use at the centre of the design agenda.

Its going to be chaos whichever way you look at it! 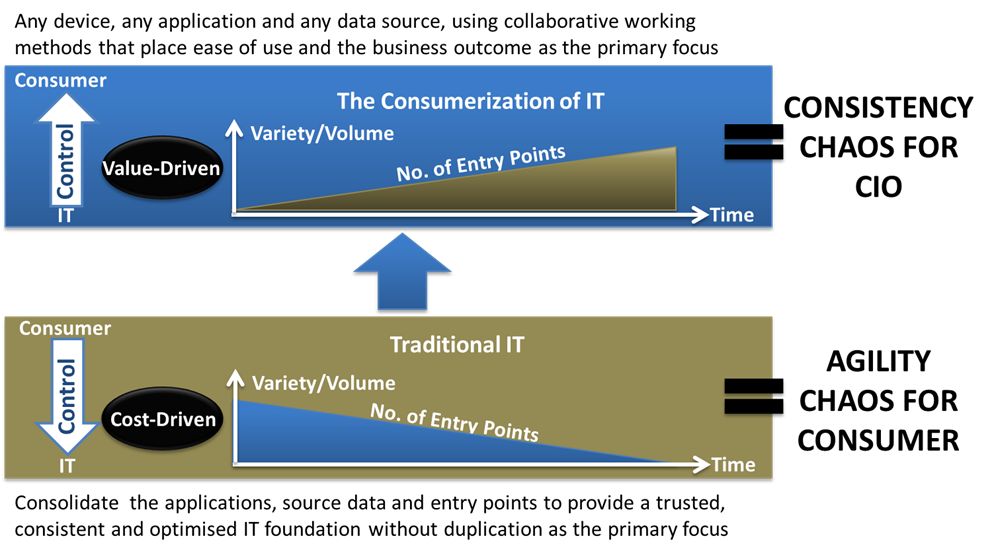 So, traditional IT whilst more structured, has historically suffered from agility challenges due to its primary focus on cost reduction and simplification over wider desired business outcomes. Consumerization of IT is an irrevocable trend, yet, it is not without its own IT challenges and, can result in data chaos for your organisation.

Of course, the emerging field of Big Data is supposed to resolve this increasing variety, volume and velocity of internal and external data sources yet, it is still in relative infancy. The potential for the empowered consumer to further fragment an organisations data assets is very real indeed and, despite the evolving field of cloud-based data integrators, is far from resolved at this point.

So, it appears that the role of the CIO is more important now that it has ever been. The boardroom will increasingly need to balance business agility and collaboration against the increasing needs for consistency, optimisation and transparency of the company’s physical and digital assets; all this in an environment where the variety of interactions with the outside world are expanding and, with unified corporate intelligence fundamental to on-going economic survival.

The CIO is dead, Long live the CIO!

So, I think it is fair to say that the longevity of the ‘command and control CIO’ whose sole remit is to reduce costs within an IT cost-centre is limited to say the least. However, here are 5 key reasons for the CIO to retain their board position:

The CIO for the next decade will focus on balancing IT consistency with the need for consumers (Customers, Partners and Employees) to interact in the manner that they see fit. In essence, the CIO will need to focus on providing service for the next generation of knowledge workers rather than attempting to control it.

The very best CIO’s will become the gateways to business innovation only, in he future, there will be no locks on the gate and, payment on entry will no longer be necessary…..