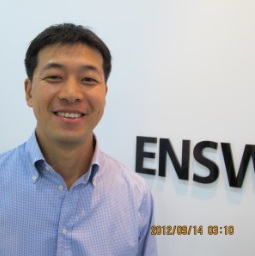 With Imideo – immediate video – you only need a single still image to find what video it comes from, and then find and play that video. Shazam does this with audio and Google does it  with text, but moving images are more difficult – more difficult for everyone except Enswers (‘E’ for entertainment), a Korean start-up that should generate more and more buzz as it grows. Generate some controversy, too, perhaps.

Enswers boasts an amazing amount of features. A browser plug-in automatically recognizes not only which video an image is from, but the exact moment it appears in the video, so you can view it immediately. “Unlike YouTube, you don’t need to watch the entire video, says Enswers’ CEO and co-founder,  Jack Kilyoun Kim.

Users can film a scene on TV with their smartphone, and the app will identify the program. On the iPad, Imideo identifies and downloads games the same way.

There’s no limit to what you can do once your technology is good: parents can take a photo of an image in a children’s book and download the book for their kids, as well as film versions available on YouTube or other video channels. Texts in English are automatically downloaded with a dictionary.

Most of the apps’ functions are only available in Korea for now, but the team is working hard towards international markets, beginning with the U.S. The app is built on an algorithm designed by Kim and his team to take every video’s “digital footprint.”

“The basic idea is to eliminate duplicates,” Kim says.

“Titles and content can vary considerably,” Kim says. “That’s why we decided to get each video’s footprint. The most popular videos are everywhere on the web, so we can find them without their title, even if the individual videos are of different lengths”

But there are two sides to every coin. In this case, the  flip- side is represented by TVs and copyright police.

Korea’s major TV stations realized they could use Enswers to find versions of their shows being circulated on the web under different names, so Enswers’ business model was built around licensing contracts.  It was acquired by KT (formerly Korea Telecom) in December 2011.

Also, a provision in Korean law has created a “supple” type of copyright monitoring. In a country with over 100 peer to peer (P2P) sites, it’s easy to download pirated media. But TV stations identify content they consider to be shared illegally and charge users a fee, generally a few dollars. Enswers gets 5% of this. Korean manufacturers are beginning to install this “automatic content-recognition technology” directly into smart -TVs, which allows companies to know what viewers are watching.

Maybe I’m reading too much into this, but I felt like I sensed a certain discomfort in my interviewee as he described these changes, which have been huge for Enswers. He insisted on the company’s desire to put the technology directly in the hands of users wishing to search for videos using Enswer.me, the company’s search engine.

Enswers is a perfect example of the absurdity of asking whether technology is good or bad. It’s always both – depending on how it used. As the late Melvin Kranzberg, a former professor of history and professor of the history of technology, taught us, it’s never neutral.

I’ll add this: by making its country the most advanced in high-speed Internet, Korea’s government and large companies put the country ahead of the curve. A culture of information and images that isn’t possible in other places is developing there, and with it, new practices. For better and for worse.