Even though we love smartphones, we do have a big problem with them: entering text causes more pain than pleasure. Touchscreens are awesome, but navigating their virtual keyboards is an ordeal. In 2008, four graduates of Shanghai’s best universities, who worked for multinational companies like Microsoft and Intel, attempted to address this.

Instead of complaining about the keyboards, they saw an opportunity, addressed the problem and found a solution. Today, more than 70 million people use their products, and two-thirds of their user base is outside China. 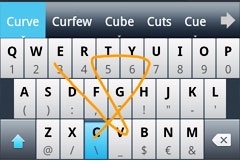 Swiping is an action familiar to Samsung and Motorola users, as their phones use Swype. Instead of typing out words, you slide your finger from letter to letter. It’s faster than typing, but, “a lot of times you forget what letter you’re on when you’re swiping a long word,” says Michael Wong, co-founder and CEO of Cootek, the makers of TouchPal.

I just bought a Samsung Galaxy Tab 2 in Hong Kong and am frustrated by the errors swiyping causes, even though I do see its advantages. On the other hand, Touchpal’s algorithm, “Curve”, shows the correct word after users enter only two or three letters, in most cases. It works well, understanding context and even predicting words that follow in a phrase. From my test, you make fewer errors and type faster using it.

Another simple thing they did that I love: they recreated the classic keyboard, giving each key two functions. In only two or three touches, the system finds the right word and selects it. Again, it’s faster and more precise. It seems easier than the T9 keyboard used on standard mobile phones.

The app also features a local dictionary that’s downloaded automatically when you travel. You can start writing San Francisco street names as soon as you arrive in the city, for example.

The list of advantages is too long to spell out here – but I urge you to try it out. The TouchPal keyboard is available in 60 languages (you can combine the languages if you’re multilingual). It only takes about 5 minutes to figure it out.

The keyboard is bundled with TouchPal Contact, which lets you find addresses and phone numbers faster. You can associate contacts with gestures as well. For example, if you want to call your partner, you can do so by drawing a heart on the screen. Sweet.

For Chinese, the apps mix phonetics – you type the first syllable’s sound – and the first lines of the characters which you draw on the screen. It saves an enormous amount of time.

Nearly 800 million people worldwide use touchscreens. TouchPal is gaining market share despite two major obstacles: Swype’s acquisition by Nuance (which also acquired T9’s developers), the company known for its voice-recognition software. It recently released a more sophisticated version of its software that is closer to TouchPal’s functionalities

The bigger challenge is that Apple does not allow the installation of third party keyboards on iPhones or iPads.

TouchPal won first prize for global innovation at the 2009 Mobile World Congress in Barcelona. But this isn’t my only reason for discussing Cootek.

The company, launched in 2008, shows that innovative start-ups are being built in China. They can target global markets from their launch and generate revenue beyond the Great Wall. Despite its 70 employees and foreign development, the company is financially stable due to  licensing contracts with mobile manufacturers who pre-install the keyboard.

For Wong, this serves as evidence. “The Chinese have been very innovative throughout their history,” he says. “In particular, in terms of efficacy. And in this market our advantage is that our language is very complicated.  We’re able to create the best tools.”

Since the invention of typewriters, written language has depended on something simple: the keyboard. “Touchscreens changed everything,” Wong says. “Our real innovation is in simplifying the touch experience.”

Swype or TouchPal? A large American company versus a Chinese start-up. Competition like this will grow dramatically in the next few years.

I want to use my ten years of experience to help lift women so they can reach their career...

Acing the returns flow: how to balance costs and value in the last-mile of returned goods

The main challenges of companies that are dealing with the ever-increasing amount of returns...

Acing the returns flow: how to balance costs and value in the last-mile of returned goods
AI

AI4Good: How governments can leverage AI for society
Show all