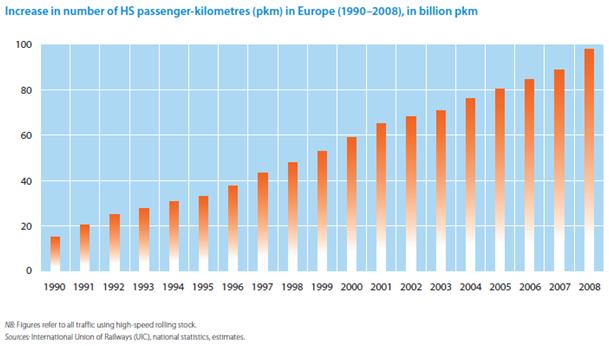 Over the 25 past years, passenger booking has never stopped to increase as well as for high-speed trains and for regional trains.

Looking at the passenger-kilometer indicator for European high-speed trains, we can observe a continuous growth of 10% per year. If we are perfectly able to explain the reasons of this growth (cost increase of petrol, population increase, border openings in Europe, …), what could we say about the impact of recent changes in European market rules in rail industry ?

As references of significant and recent changes, we will asses how the 2 first rail packages, on 2001 and on 2004, can have an impact on the passenger-kilometer.

In this article, we will attempt to assess how a cause to consequence relationship is relavant.

Spain does not allow a rail competition yet and so belongs to the “delayed” group. The ministry of transportation plays the regulator role which is, in this case, a weakness in terms of development as budget highly depends on the government budget. The infrastructure and the carrier are fully separated and indepedent.

Nevertheless, in the past 25 years, Spain managed to have a global growth of his passenger-kilometer. Since the year 1995, growth became more significant with an average of 3% per year.

Consequently, we can’t see any impact of the 2001 and 2004 rail packages on the passenger-kilometer.

France allows a marginal rail competition and so belongs to the “on schedule” group. France does not allow direct competition with external railway companies. The market is only opened for a few international routes as Paris-Milan exploited by Artesia, a joint-venture of SNCF and Trenitalia. The government has delegated the regulation power to an independant organization and the infrastructure and the carrier are separated but not fully independant.

Like Spain, France has a global growth in the past 25 years. This growth is more significant since the year 1996 with an average of 4% growth per year.

Consequently, we can’t see any impact of the 2001 and 2004 rail packages on the passenger-kilometer.

Germany widely allows direct competition with external railway companies and so belongs to the “advanced” group. The Government has delagated the regulation power and the infrastructure and the carrier are not separated.

It started to convert its market to the open access model in the early 90s. Except the high increase between year 1995 and year 1996 which is due to the reunification process, Germany has a global growth despite the important market share cut that can be observed in the year 2003. Since this year, Germany has an average growth of less than 2% per year.

Unlike the two previous examples, 2001 and 2004 rail packages seems to have a negative impact as we can observe a brutal  market share cut and a lower ramp-up.

It seems that liberalization has a negative effect on passenger booking. Nevertheless, as the German example shows, the opportunity to compete outside the borders seems to provide positive results. This may be the reasons why countries such as France go ahead liberalization carefully, with a strategy based on the joint-venture model rather than the open access one.

Although it demonstrates a negative impact, European liberalization is still at the beginning and lots of work remains to do to have real transparency in a global market. Consequently, we should be prudent to conclude it will go ahead in the future as we may assist to new phenomenon such as the birth of International Corporation which legal rules may have a minor impact on.