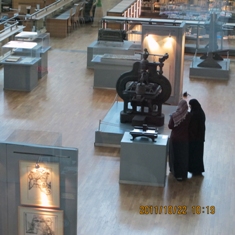 Alexandria – Located not far from the ruins of its ancestor, the building containing the new library of Alexandria (Bibalex) is alone worth the trip. The exterior of the building designed by the Norwegian firm Snøhetta looks like a sort of half-moon sitting on the horizon. The interior contains the largest reading room in the world, composed of seven terraced floors and containing 400 networked computers. The library has a small parchment collection, but the only manuscript that remains from the original library is in Austria. Here, you can only see a replica – results of a more recent past.

The stacks currently contain 1.5 million volumes (500,000 of which were donated by the French National Library), and can hold nearly eight million. But you get the sense that the library’s importance is in something else – part of me even wishes it held no paper-bound editions.

“More than a library of books, we want to create a series of platforms for disseminating knowledge,” Mariam Nagui, director of exterior communication for the IT section – which has almost 50 developers – told me while showing around. Among the library’s digitization efforts are an ancient copy of the Koran and of the Bible (in Arabic), placed side by side. You can search how and when the same word is used in either text, for example, “peace.” It’s very instructive.

Books in the digital collections can be annotated and highlighted. Every user can have their own virtual bookshelves, and share what they are reading on Facebook and Twitter. Soon, they’ll be able to share citations. All this is due to the work done by the International School of Information Science (ISIS, appropriately), which is located in the library. 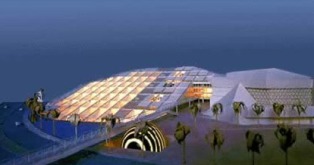 The Bibalex has received a lot of aid (private and public) from the exterior. One of the most symbolic instances, in my opinion, is that the Internet Archive, run by Bruce Khale in San Francisco, installed a mirror containing all Web content from 1996 to 2007 there.

The library also has a super computer that can be used by Arab researchers, at no charge, for efforts from data mining to genomics. It also contains a collection of PowerPoint speeches, launched with the University of Pittsburgh long before SlideShare.

Outside of the website, which doesn’t grant access to everything, the library has installed “Embassies of Knowledge” in “several socially diverse and geographically distant locations throughout Egypt.” There, people can access the library’s collection of e-books.

The reading room’s computers are popular with the city’s young people, who can use them for whatever they choose to pay (on average, yearly membership of less than 4€).

Skeptics say that they come just to log into their Facebook page, but there’s nothing wrong with this. It’s part of the risks and rewards of web, net, and information technologies.

“Everything we’re doing today is digital,” Nagui said. “We try to facilitate maximum access to what the library produces.” What a revealing word. In the digital age, a library is not simply a repository of books, a receptacle of knowledge – it produces. Assembling and making accessible, it is transformed into a platform.

I hope the Bibalex could last as long as the original, 650 years. That way we’ll know if digital media will resist time as well as papyrus did. I’ve seen many universities are were better funded and better connected, notably Stanford and Berkeley, but none is as symbolically important as this, both for its history and location. I’m not sure how, but I think we should all try to help make it a real place of open knowledge, digitized and distributed.