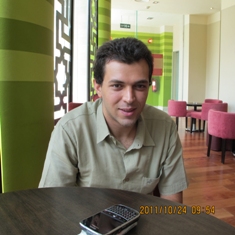 Very nice but not totally convincing, Aly Rafea told me a secret this morning, a secret that’s worth gold. Rafea is the founder of bey2ollak.com, an app that “lets people share traffic information for the primary streets in Cairo and Alexandria, (the country’s second-largest city),” he told me. Bey2ollak translates roughly to “what people are saying,” with the “2” replacing an accent mark – the hazma – that doesn’t exist on Latin keyboards.

Initially launched for Blackberry and iPhone, then Android, the app is now available on the majority of Nokia phones, the primary phone used in Egypt. It has no GPS, no map. The user looks up the the name of a street or highway they want to take, and the app returns comments via text. Traffic conditions are classed in five categories based on how fluidly it is moving. The app can report what it sees. One-hundred thousand people use the service launched, as is proper for geeks, on 101010: October 10th of last year.

Rafea, 23, holds a degree in computer science; he launched his company with four family members.

I didn’t really understand their choice to first launch on smartphones, in a country where the devices are still rare. The same for not using SMS.

His response: “Innovation, for us, meant going for simplicity. Not many people know how to read maps, so we chose the simplest system possible. Egyptians are fine receiving SMS’s, but sending them is not as easy.”

I didn’t find this explanation very convincing after seeing people use SMS in Dakar, Accra and Nairobi (see my post on Kenya’s m-farm, for example).

And this is how, forced to retreat, he told me that the key to his company is not crowdsourcing, not technology: “There’s simplicity, sure, but the language is essential. We decided to launch in neither Arabic or English, choosing instead the language that young Arabs use on the internet, a language their parents don’t understand.” This form of Arabic is written in Latin script, using numbers to fill in where letters don’t exist; it has its own vocabulary.

This is obvious, my dear Francis, when dealing with social media!

Thank you, 3ly (that’s how he writes his name).

What lessons can we learn from this?