Client challenge: Lisa Steiner, a marine biologist working out of the Azores in Portugal, wanted to make it easier to identify sperm whales by the identifying pattern on their tails in order to better understand how to protect the species

Solution: Lisa worked with Capgemini to use AI to develop a solution based on AWS technology that could learn to more quickly and reliably identify matching images, which has allowed Lisa to focus her time on other parts of her research

These days, few topics command as much attention or potential as artificial intelligence (AI). Virtually endless opportunities exist for new technology to change business and daily life, but this conversation does not turn often enough to how it can make the world a better place to live. AI can do more than deliver advantages to businesses; it can play a vital role in conservation efforts as we enter a critical time for our planet.

Enter Lisa Steiner, a marine biologist based out of the Azores who has devoted her life to conservation and tracked sperm whales for almost 35 years. After centuries of hunting and modern disruptions such as naval sonar and ghost fishing gear, the species has been listed as vulnerable since 2008, with only a few hundred thousand believed to remain. Now, more than ever, tracking sperm whales and understanding their migration patterns is . 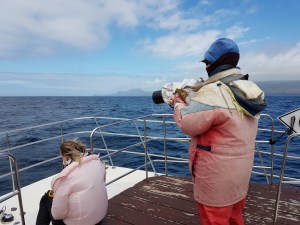 “The tail of a sperm whale is kind of like a fingerprint,” says Lisa. “They have a distinct shape so we can keep track of them for pretty much their whole life.”

By matching photographs of the whales’ flukes (another word for tail), taken by marine biologists, Lisa can map out migration patterns in order to better inform environmental policies that can protect the species. However, doing so manually is far from easy, as image quality can dramatically alter the associated challenge as well as the amount of time needed to identify matches.

“I have to manually assist the program to pick out the contour for each half of the fluke,” Lisa explains. “If the photos are good, this process doesn’t take very long. However, if there isn’t a lot of contrast between the fluke and background or there is a lot of glare on the edge of the fluke, I have to follow the contour manually.

“When you have nicks, they’re not as easy to see, which is one of the reasons it’s important to have a program that’s doing it automatically.”

In 2019, Capgemini got wind of Lisa’s situation and used the case for its annual Global Data Science Challenge, a group-wide internal competition where hundreds of employees from all over the world compete in small teams to address real world challenges using artificial intelligence (AI). In partnership with Amazon Web Services (AWS), teams from around the world dreamed up potential AI-based solutions that would make it far easier to find matches between different fluke images that had previously gone unnoticed. Working with Lisa, they developed different concepts intended to make her day-to-day work simpler and let her spend more time on other critical elements of her research.

At the end of the competition, the winning team presented a pre-trained deep neural network built on AWS’s machine learning services that can perform adjustments to submitted pictures in order to accurately identify identical flukes across multiple images with 97.5% accuracy. In addition, the solution placed a great deal of emphasis upon futureproofing and performance in real-life scenarios. As such, the algorithm drew upon high-quality deep learning frameworks while pre-processing steps used a combination of open-source libraries to make them easily maintained and extendable. Finally, the entire solution was deployed as a lightweight service to ensure that it is straightforward to use.

With the AI-side of the project completed and the training process taking only three hours, the next step is to design a user interface that wrapped everything into a web-based application that Lisa will be able to use easily. Once it’s ready, all she will need to do is upload new pictures and wait a minute or two for the automated processing pipeline to complete before she can enjoy the results.

A better future for whales and beyond

Lisa has already seen how much easier it is to find matches. “They’ve trained it to recognize the contour of the edge. It finds matches that my old program didn’t find,” she says. “I found quite a cool match that had not been detected previously, due to some changes in the contour. This goes back to 2002, so there were three separate IDs for this animal, instead of one.”

However, the solution’s ceiling isn’t just making Lisa’s life easier; instead, the program has the potential to provide her with a great deal more images than before by engaging with a user base that goes beyond marine biologists. Thanks to the ease with which the application can be used, the hope is that in the long run, people from all over will be able to upload pictures of sperm whales spotted in the Atlantic Ocean. 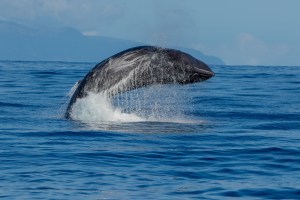 “The whole idea of this project with Capgemini is to catch the public’s imagination and get them submitting photos from places that I would never go,” says Lisa.

The work done with Lisa is just a start for using AI within conservation and environmental efforts. Already, the solution developed to match sperm whale flukes can be transferred and applied to other species to support similar research efforts. In this way, endangered or vulnerable animals all over the world can more effectively be tracked so that biologists can better understand population levels, migration patterns, and changes within behavior as a result of environmental changes. With improvements made to their research methods, these experts can more effectively provide guidance that can influence international climate policy.

And AI only continues to develop and become relevant for an ever-wider array of opportunities. Lisa’s work with Capgemini represents a crucial step on the path towards further innovation, and with this kind of collaboration between technology and research experts becoming more prevalent, the vision of a sustainable future seems more attainable than .