Energy is one of the pillars of civilisation development that upholds the global economy today. Continual economic progress is demanding a replacement of fossil fuel energy using renewable energy. Tech companies such as Google, Facebook and Apple are all targeting on reaching 100% renewable energy [1]. This global campaign is reasoned with environmental responsibility for these Silicon Valley giants to expand. Solar energy is projected as one of the cheapest source of energy by 2030, therefore we have about 13 years to prepare a welcoming of a societal transition.

The photovoltaic market has progressed more rapidly than the most optimistic forecasts in the last 20 years, with support from political leaders to reduce greenhouse emission. The grid-connected photovoltaic capacity increases at an annual average rate of 60%, making it the fastest growing energy technology. The numerous challenges to penetrate large scale solar power in the electricity grid is mainly due to the intermittency of the sun. This alone poses a potential threat to the reliability of the electricity supply. Besides, the solar energy generation is dependent on environmental factors (i.e. temperature, humidity and cloud cover), hence cannot be fully controlled. Least to say, as fluctuations in capacity can cause instability to the electricity grid, it is necessary to predict the amount of power that will be generated on a photovoltaic cell. This has motivated the use of machine learning techniques to support better management of energy generation and consumption. This is why the solar industry is embracing valuable weather data that is used for generating solar radiation predictions.

Constructing a solar forecast requires weather data which comprises parameters such as precipitation, maximum temperature, air pressure, downward/upward short-wave radiative flux…and so on. They are used as training features. This use of many atmospheric variables to make predictions from a computer is called a numerical weather prediction (NWP) model. They are generally used in conjunction with photovoltaic performance simulation to convert harvested solar irradiance to solar power. On the other hand, cloud formation forecasts can be generated using satellite images and ground observations, which are used as inputs to artificial neural networks for predicting global horizontal irradiance.

IBM, via machine learning algorithms that amasses immense data for solar forecasting, has recently reported an improved accuracy of 30% compared with the ones from conventional NWP approaches, namely Rapid Refresh (RAP), the High-Resolution Rapid Refresh (HRRR), and the North America Model (NAM). This ensemble method is a self-learning weather forecasting model – a process constructed for the system(s) to learn from data performed alone by a machine. It allows continuous analysis and improvement in solar forecast. The method combines common regression models such as support vector machines, simple linear regression, multi-layer perception, locally weighted learning and least median square. Figure 1 shows the plot of probability density as a function of the solar power forecast error, which clearly shows a shorter full-length half-maximum for the ensemble compared to the three NWP models, which signifies better performance in prediction accuracy. Figure 2 shows the probability function over the clearness index, which shows the prediction of the ensemble model intimately close to the actual results. The comparison of accuracy between the ensemble and individual machine learning forecasting techniques shows that cloudiness predicted with the ensemble has 64% accuracy, whilst RAP has 50%, HRRR 39.6% and NAM 49% [2]. 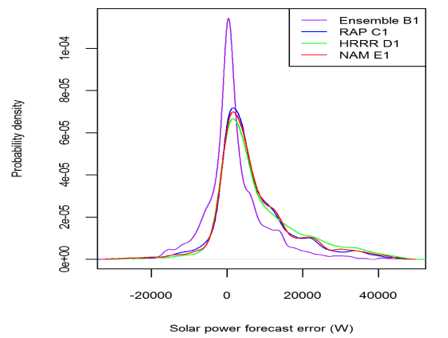 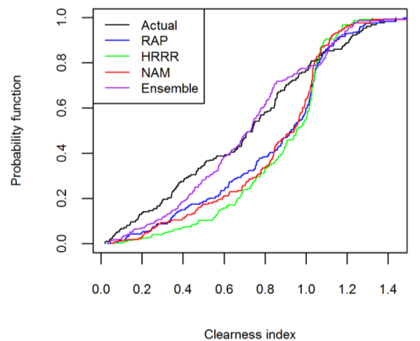 Like many other technologies in history where the crossover of an idea to another field gave birth to serendipity, such as microwave oven (a technology branched off from the radar technology used in world war 2) as a popular kitchen appliance, the implications of machine learning technology is being actively measured in the solar industry. IBM’s improvement in solar forecasting would contribute to a better bridging of solar farms and electricity grid supply. On the other hand, the ensemble method has showcased the power of combining multiple techniques in machine learning to generate a more accurate output. Furthermore, the term “self-learning” will become more familiar as it shares similar principle with the “self-play” algorithm in Google Deepmind’s AlphaGo.

Coming back to the discussion of solar, the solar radiation on Earth surface represents ~1000 Watts per square meter (W.m-2). The technically feasible potential that can be harnessed is an astounding 60 TW from the 600 TW gross theoretical useful potential. Most important, it is the only source of energy that could satisfy the energy demand by 2050, accounted with population growth. There is a clear growing interest from various industries to utilize solar energy. The ability to predict solar availability ahead of time is extremely valuable. IBM’s ensemble machine learning algorithm have been developed to help orchestrate the constant power supply to the solar electricity grid. Research in this area has proposed intelligent hybrid predictors for potential solar power generation for as much as 6 hours ahead.

If you’d like to be part of Capgemini’s data science team, you can apply to join!

Sparking the data science of optimization

Trade promotion optimization is maturing and becoming a necessity for promotion planning. As...

The secret to digital transformation

Read this blog to learn how companies can better equip themselves to achieve digital...

The secret to digital transformation
Show all