There is a need for a new warfare approach which can overcome the problems of asymmetric warfare and which at the same time must be applicable in today’s multipolar world and its multipolar competition with economic constraints. Power is distributed among several states rather than being dominated by one or two states and there is a proliferation of technology, capabilities and operational concepts. Future military advantage can only be reached through a radically new warfare concept. A concept that is to be different from Joint Operations or Multi-Domain Operations, which are both aimed at creating synergy across domains and allow disaggregated and joint weapon systems to work together. Thus, massing fire power but not the forces. Mosaic operations is an “outside-the-box” view on Decision Centric warfare which is aimed at both improving internal decision-making and at the same time degrading the opponent’s decision-making.  In other words: to attack the “Orient”-phase in the OODA-loop (Observe, Orient, Decide and Act) so that the enemy will not be able to determine objective, size and strength of the mosaic force they face, let alone be able to direct countermeasures.

Future maneuverability will be based on automated planning tools and artificial intelligence to rapidly compose, adapt, and recompose smaller force packages to achieve military objectives. There is a need to minimize the manual intervention and take help from computer-based automated systems, through machine-to-machine operability. Coupled with the use of electronic warfare and cyber operations this will impose multiple dilemmas on an enemy to prevent it from achieving its objectives. Such an approach must lead to a better integration of actions between air, land, sea, space, and cyberspace domains.

One take on Decision Centric operations is Mosaic Warfare which is a proposal under development by the US Defense Advanced Research Projects Agency (DARPA). The US Defence Advanced Research Projects Agency (DARPA) notes that “like the ceramic tiles in mosaics, these individual warfighting platforms are put together to create a larger picture, or in this case, a force.” The mosaic pieces are just-in-time, modular, re-composable military capabilities providing an achievable roadmap towards the agility and flexibility needed in future conflicts. Such large numbers of battlefield entities would overwhelm systems or create distraction, confusion and functional difficulties for the enemy’s command and control set-ups. It forces the enemy to defend all domains all the time and from all directions, which will impose multiple dilemmas to orientation and decision making.

The mosaic concept would be scalable with applicability from surgical operations to large-scale battlefield action. The mosaic C2 approach speeds decision making through human command and machine control enabling faster decisions and the ability to mount more simultaneous actions. A machine-enabled control system can rapidly assess the viable combi­nations of force elements and tactics in support of the decision-making process.

Maneuverable IT Architecture for the Tactical Edge

Implementing Mosaic Warfare or other forms of decision-centric warfare requires substan­tial changes to a force organizational design, their C2 processes and supporting IT Architectures. Underlying systems and capabilities needed for Mosaic Warfare do not yet exist, but development must start now. The maneuverable architecture to support a future military force is to provide “water-like” scalability and elasticity, real-time situational awareness and the speed to deliver and adjust solutions ultra-rapidly.

Composable infrastructure needs to be delivered anywhere, although most likely this will be through distributed and mobile cloud platforms. To flow uninterruptedly, it needs to tap into a connected, always expanding and changing network of people, systems and organization. Edge servers (or tactical edge servers) are at the heart of the military’s collective adoption of edge computing technologies. Tactical edge servers act as decentralized storage and application hubs for tactical edge warfighters.

Agile, DevOps and continuous delivery have been paving the way towards the maneuverable architecture which is to support the composable mosaic force. API’s and microservices will evolve towards a distributed service mesh contributing to the necessary portability and adaptability, both inside and outside defence organizations. Headless applications – as in chatbots and voice assistants that replace established application user interfaces – can deliver that radical portability, as they are built from the ground up to understand and deliver on the intention of the user as quickly as possible, without any filters along the way.

The biggest challenge is probably the flow of battlespace data, not only within the tactical edge but also between the edge and the enterprise domain. At present there is no military in the world that can deliver all available data to all entities in a mission. For example, the data on an F-35 fighter may not be available to a frigate commander managing a rocket launching platform and vice versa.

Adding StratOps to the mosaic

The Mosaic operations approach is closest to the “Be Like Water” paradigm as defined in Capgemini’s Technovision. The force elements can be composed in accord with the enemy just like water flows in accord to the terrain. Because the new mosaic concept will change the way forces operate and execute missions, and the way capabilities are developed we argue that the concept’s agility must also be extended to strategy. Just as DevOps and continuous integration and continuous deployment in software development, StratOps it is aimed at bringing agility to strategy execution. In a military context this means composing weapon systems and force elements and transforming these to almost continuously adapt to the changing battlespace. Applying StratOps in mosaic warfare can be described as creating a “warfighting pipeline” extending into the tactical domain. Where in DevOps performance and availability of IT services are monitored, in the StratOps approach operational effects are monitored and looped back to strategic mission planning and design. This is schematically shown in the following figure. 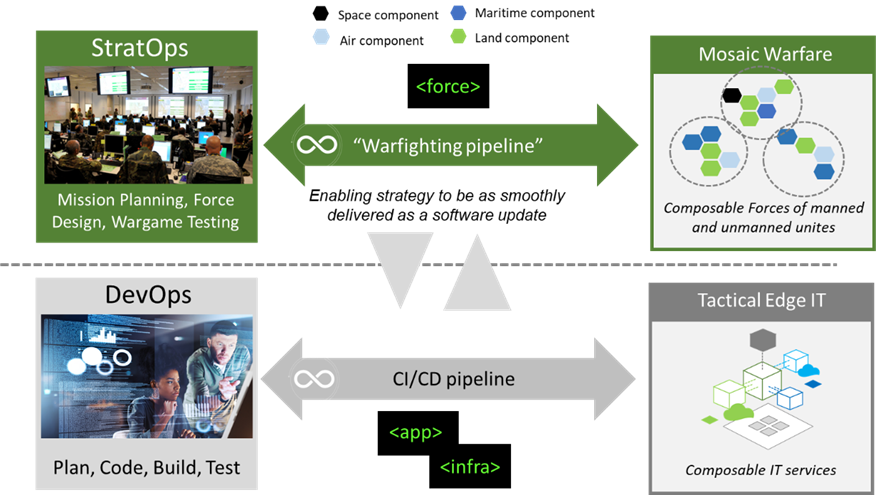 Combining the Mosaic Warfare and StratOps concept could enable the military to smoothly deliver strategy to the battlespace as a software update and realizing re-composable warfighting capabilities. Decision centric and mosaic warfare enable a welcome change in innovation as well. Innovation can now be focused on smaller warfighting capabilities or focused even on a mission. Through smaller innovation steps the force of tomorrow can be realized faster. AI and other algorithmic approaches to advanced automation will be essential to achieving the vision of mosaic warfare. Implementation requires a holistic view on tomorrow’s force organization, processes and technology. However, with the small incremental improvements seen in most Western forces today, the planned force of tomorrow will be much similar to the force of today. For the EU this was the reason to start work on the Strategic Compass for Security and Defence which is expected in March 2022. It will describe the future forces of the EU members. The challenge for the EU is that today developments are quite different per country, with only few countries investing in lighter and more mobile capabilities. But the EU should not establish a new quantitative Headline Goal because future military operations will require tailor-made force packages. 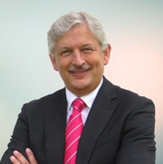 Har is an Enterprise Architect, IT Strategist and Solution Director Strategic Deals. He defines architectures and solutions to guide and govern the digital transformation process of organizations. Especially in Defense and Public Security. He is experienced in Agile architectures, Cloud concepts, Product Development, DevOps and Security. Covering both Infrastructure and Applications

Be Like Water (Part 3): Agile from Strategy to Operations

Strategy is a broad concept and has many nuanced definitions, especially in defense. It is...

Be Like Water (Part 3): Agile from Strategy to Operations
Show all
Go to mobile version