Paris, May 24, 2018 – The Shareholders’ Meeting of Capgemini SE, held yesterday at Pavillon d’Armenonville in Paris, adopted all resolutions presented for vote. Paul Hermelin’s term of office as director was renewed by shareholders and the Board of Directors subsequently confirmed his duties as Chairman of the Board of Directors and Chief Executive Officer. The Shareholders’ Meeting also approved the appointment of Frédéric Oudéa as a new director.

The Shareholders’ Meeting provided an opportunity for Paul Hermelin to communicate his vision of Capgemini in the years to come. The Chief Operating Officers also spoke; Thierry Delaporte on the evolution of the Group’s service portfolio, and Aiman Ezzat on the management and development of the Group’s go-to-market.

Paul Hermelin, Chairman and Chief Executive Officer of the Capgemini Group, stated: “Bolstered by the repeated support of its shareholders and the Board of Directors – whom I would like to thank – Capgemini can reaffirm its ambitions: to position itself as an industry leader through the quality of its customer references, its offers and its talent. We are also committed to digital inclusion, which is a priority for us in terms of our Corporate Social Responsibility.”

The Shareholders’ Meeting approved the following resolutions on the Board’s composition:

Following this Shareholders’ Meeting, Capgemini SE’s Board of Directors has 13 directors[2], including two directors representing employees. 80% of directors are independent[3] and 45% are women[4], with a reduced average age of 59 years old. This reflects the Board’s desire to combine efforts in recent years to renew its composition, increase the number of women, and diversify profiles within a reduced number of directors; to reinforce cohesion and collective and efficient decision-making. In line with its diversity policy, the Board will continue the international diversification of its composition in the coming years.

The Chairman and Chief Executive Officer’s 2017 compensation components were approved, along with the principles and criteria for determining the remuneration of the Chairman and Chief Executive Officer and the two Chief Operating Officers. The Shareholders’ Meeting also approved the regulated commitments concerning the Chief Operating Officers, Thierry Delaporte and Aiman Ezzat.

A detailed breakdown of voting results can be found on the Capgemini website at https://investors.capgemini.com/combined-general-meeting 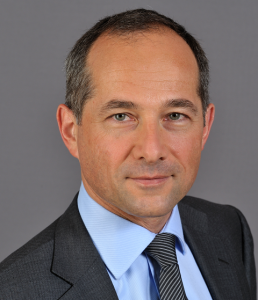 Born in 1963, Frédéric Oudéa is a graduate of the École Polytechnique and the École Nationale d’Administration.

From 1987 to 1995, Frédéric Oudéa held various positions in the French senior civil service (Audit Department of the Ministry of Finance, Ministry of Economy and Finance, Budget Ministry, Private Office of the Minister of Budget and Communication). In 1995, he joined Société Générale and in 1996 he was appointed Deputy Head, then Head, of the bank’s Corporate Banking arm in London. In 1998, he became Head of Global Supervisory and Development for the Equities division. In May 2002, Frédéric was named Deputy Chief Financial Officer of Société Générale Group. He became Chief Financial Officer of the Group in January 2003. In 2008, he was appointed CEO of the Group, before becoming Chairman and Chief Executive Officer in 2009. Following the regulatory split between the roles of Chairman and Chief Executive, Frédéric was appointed Chief Executive Officer in May 2015. In 2010, he was named Chairman of the Steering Committee on Regulatory Capital (“SCRC”) at the Institute of International Finance (“IIF”). He has been President of the European Banking Federation (“EBF”) since January 2015.

Composition of the Capgemini SE Board of Directors

following the Combined Shareholders’ Meeting of May 23, 2018

[1]  A biography of the new director, Frédéric Oudéa, is presented in the appendix.

[2] The composition of the Board of Directors is presented in the appendix.

[4] The two directors representing employees are not taken into account in calculating this percentage, in accordance with Article L.225-27 of the French Commercial Code (Code de Commerce).