Virtual Train is an immersive solution jointly developed with Alstom. This Smart Engineering solution focuses on system verification and validation (V&V) of test benches and facilities on real trains at Alstom’s production sites. Virtual Train enables the digitalization of Alstom’s system validation processes with the innovative use of virtual reality and augmented reality.

This digital transition from paper documentation to immersive technologies is necessary for multiple reasons, including productivity and reliability. However, the evolution of virtual and augmented reality technologies shows that it is not trivial to integrate such technologies into existing systems. In fact, the stability of AR engines for satisfactory production use across industries is still a work in progress. Capgemini’s approach has made it possible to develop a solution linking mixed reality and Alstom’s test resources through the modeling and animation of embedded systems in virtual and/or real environments. This significantly accelerates and streamlines the interpretation of the tests by the operators who are able to validate the scenarios at a glance.

During the initial test phases on the system benches, the application demonstrated a gain of about 30% in the time taken to analyze the observed glitches. The real-time, direct visibility of the state of the systems allows Alstom’s operators to interact with the equipment and change parameters in the database, opening up the possibility of playing the most advanced test scenario models on a control screen with 3D visualization of equipment movements such as door movements, changes in ambient light, display of computer frame interpretations, etc. The Virtual Train accurately presents a simulated view of the entire system, which brings reliability into the final delivery of Alstom trains. We use generic modules to import models from CAD, to calibrate any type of object in a physical environment, or to display simulated data on real equipment in augmented reality.

The Virtual Train solution won Capgemini the 2019 ERCI Innovation Award in the Best Large Enterprise category at SIFER, one of the most important international rail exhibitions, which was held in Lille, France March 26–28. The jury distinguished Capgemini not only for the best innovation, but also for the significant economic advantage of its Virtual Train solution. 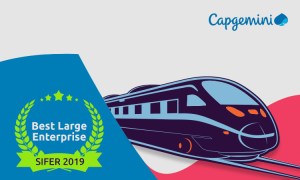