So the final counts have completed and the dust is settling on the 2015 election. What were the major factors behind the results that we saw earlier this month? Has the pre-election talk of us moving into a world of multiple parties been borne out by the results?
Let’s look at some of the factors that tell the tale…
Scotland
One of the biggest shocks was the massive surge towards the SNP in Scotland. They went from a position of having 6 seats in 2010 to having 56 now. To achieve this they had to overturn some pretty impressive majorities, including a swing of over 27% in Glasgow North East. What is interesting is not so much that they achieved a lot of the massive swings needed, but that their swings seemed to be proportional to the swing needed. This is illustrated in the chart below which shows the swing achieved against the swing needed: – 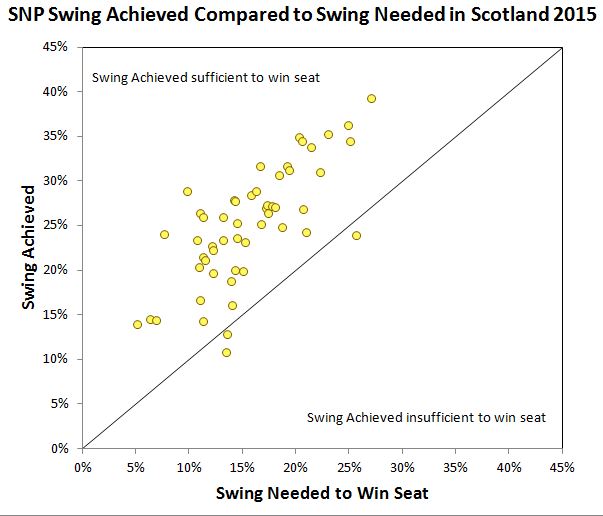 What’s more, the SNP are in contention (1st or 2nd) in every seat in Scotland. This is an increase from 35 of the 59 seats.
Turnout
One story that is prevalent amongst political people is the concept of Lazy Labour (that a lot of Labour supporters do not go out and vote). This is the reason why it appears to be Labour that is always praying for good weather, so that their supporters do get out.
The below charts show the turnouts for the Conservatives, Labour and the Liberals in the seats that they won. 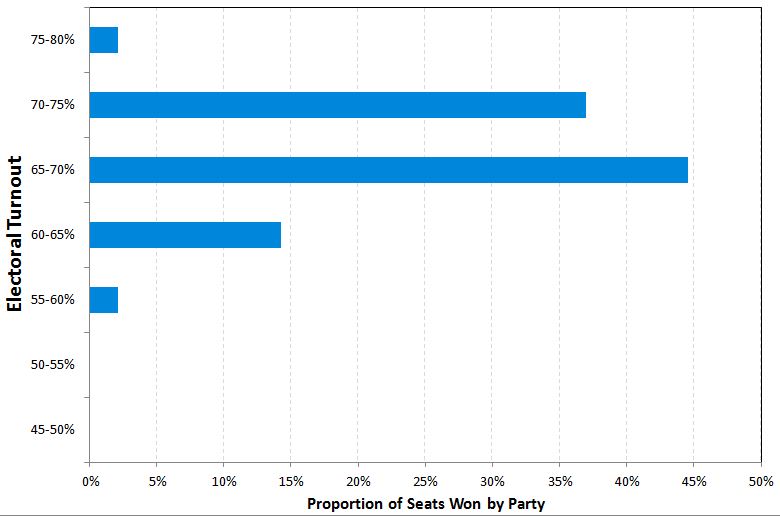 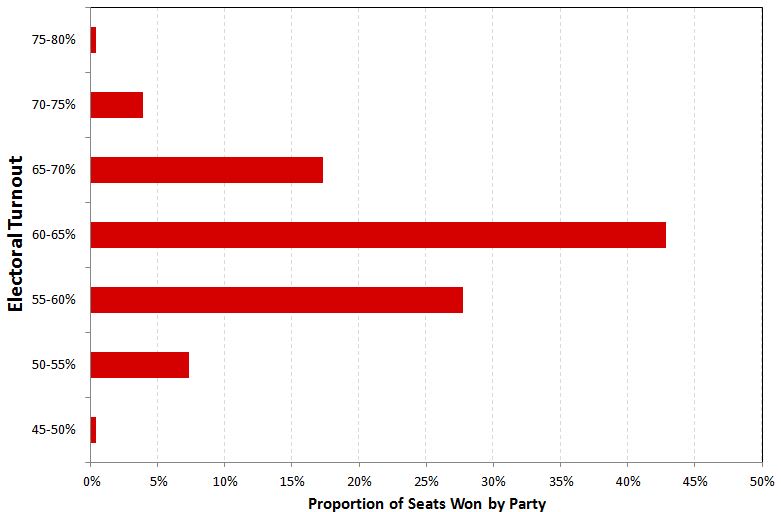 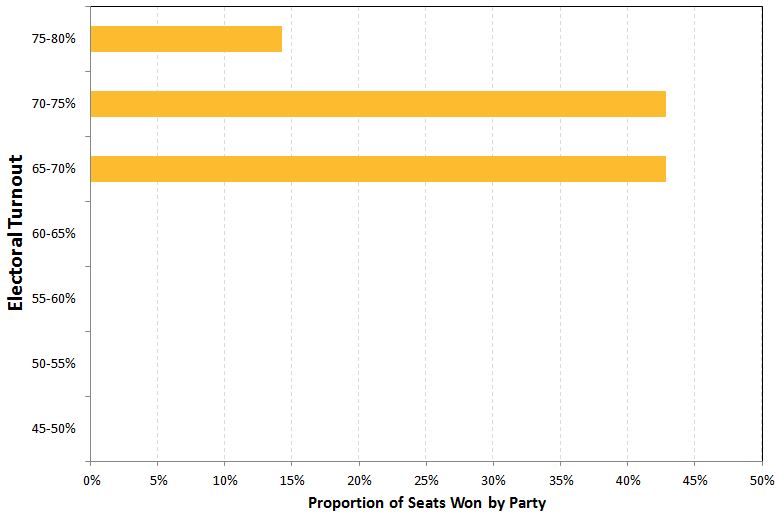 As can be seen, Labour seats tend to be the ones with the lowest turnout – Stoke on Trent Central had only 49.9% turnout in England and Wales. The highest was in Bath which the Liberals won – with 77.5 %.
What effect did the expected margin have on turnout? Interestingly, there is no clear correlation between the final result and turnout, which seems to indicate that closeness of the race did not have an impact on how many people came out to vote.
Regional variation
Apart from Scotland, was there any major difference between how the regions voted? The following charts illustrate the change in vote across the English and Welsh regions: – 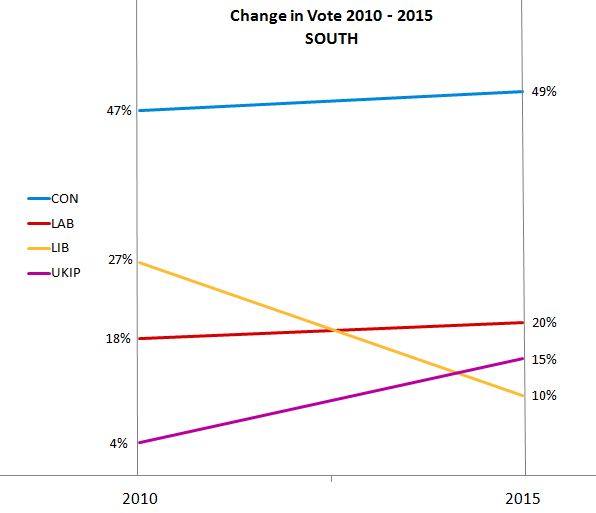 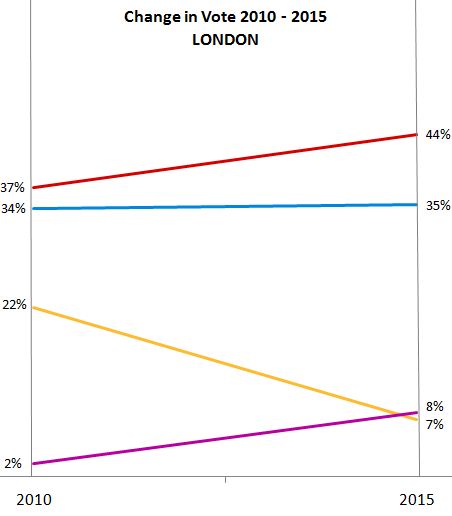 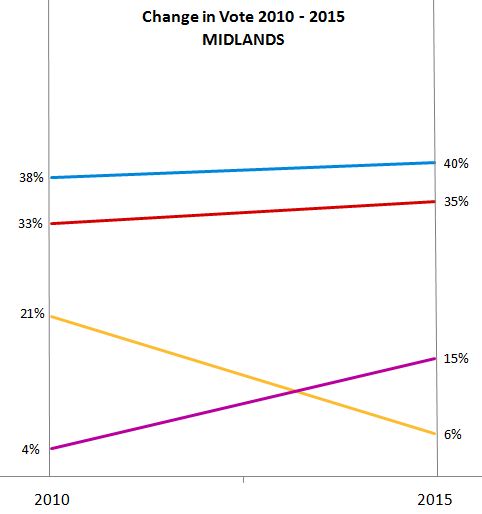 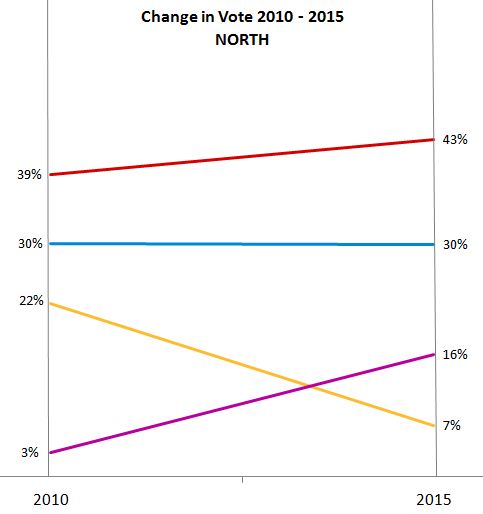 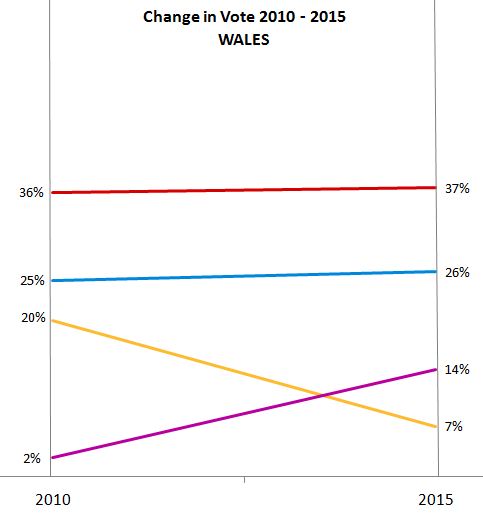 English Marginals
One of the most ubiquitous images on election night is the battleground. This is the seats that one party needs to win to win control. This starts with the lowest swing to win and goes up until you hit the point where you will have a majority. In this election all the parties had battlegrounds, as they all needed to win seats to for a majority. What happened on the night was quite interesting; whilst there was movement in all of the seats, it occurred more in safe seats than in marginal (safe seat here meaning a swing of more than 5% would be needed for the 2nd placed party to win it).
This is illustrated by the chart below: – 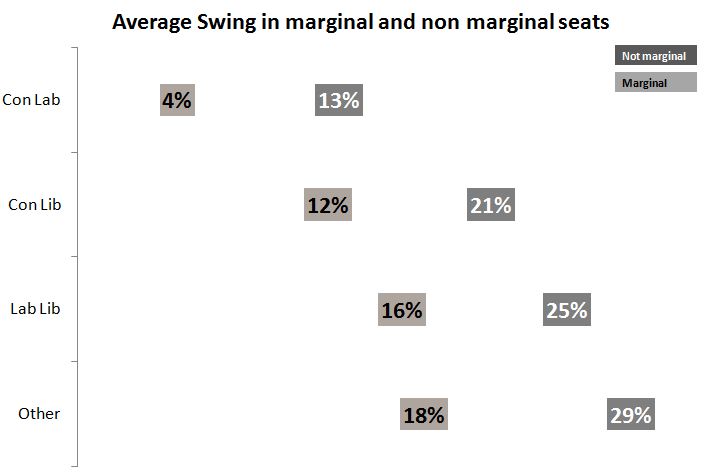 As a net result there are actually fewer marginal seats in England now than before – this is shown by the following table: –

So whilst in 2010 there were 165 seats where the swing needed to win the seat was less than 5%, in 2015 there are only 100 seats where this will be needed.  Indeed there is one seat (Liverpool Walton) where Labour has a 72.3% majority, meaning that the party in 2nd place (UKIP) now need a swing of more than 36% to win the seat!
Contention
We have already seen that at the next election there will be fewer marginal seats in the battleground. But which parties will be best placed to move forward?  We can get a view of this by looking at the seats in which the parties are in contention – that is they either won this time or they are within a 5% swing of winning. This can be seen in the following chart: – 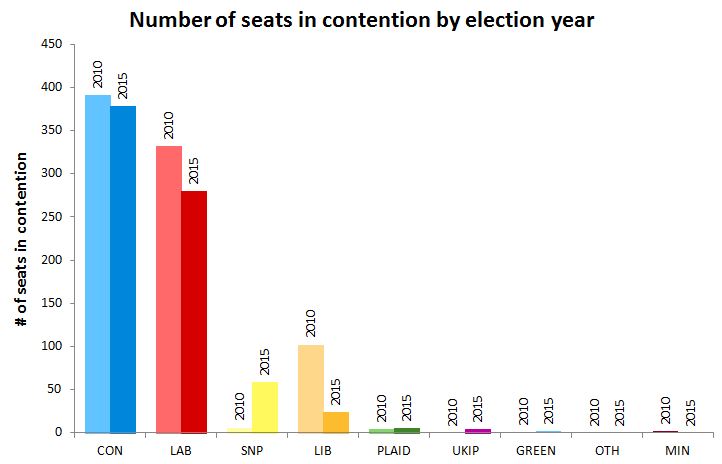 What this shows is that despite the 2 major parties having just 2 seats fewer between them after this election, they are dropping out of contention more. The Tories are in contention in 13 fewer seats, and Labour in 52. The biggest winners are, of course, the SNP but what may surprise people is that UKIP are only in contention in 4 seats – although this is better than their 0 seats at the 2010 election and indeed this appears to be not in alignment with the number of seats that they are in 2nd place – as shown by the following chart: – 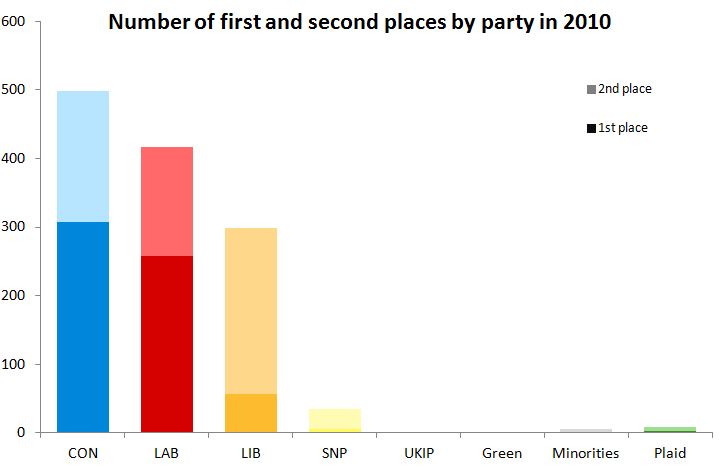 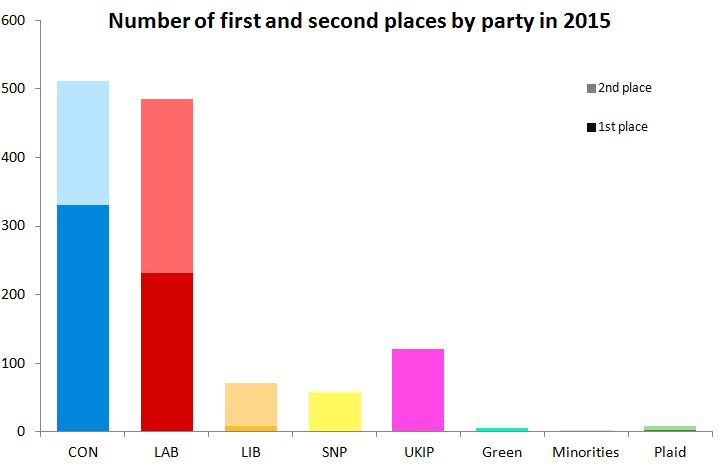 So UKIP are now 2nd in over 100 seats – however what is striking is the fact that the Conservatives and Labour have both increased their hold on the seats in terms of 1st and 2nd places – before the election all the talk was about a new era of multiple parties – we are now in a world where the 2 main parties are increasing their dominance.