Our Analysis before the Cricket world cup started (Who Will Win the 2015 Cricket World Cup?) indicated that Australia would win, with India being a reasonable outside tip. Does this prediction look safe, and what are the factors behind the biggest scores in the tournament so far? First we shall look at what happened over the Group Stage.

A Summary of the Group Stage

New Zealand topped Pool A, with Australia, Sri Lanka and Bangladesh following them through to the Quarter Finals. India reigned supreme in Pool B, ahead of South Africa, Pakistan and the West Indies. After an abysmal run England drop out of the World Cup, along with Scotland and Afghanistan who also failed to reach the top four in Pool A. In Pool B Ireland, Zimbabwe and the UAE failed to progress. Ireland proved the surprise package of the tournament but narrowly fell away, with an inferior run rate versus the West Indies. Their valiant World Cup performance and improving record over the last few years will soon pose a headache for the ICC when attention turns to the next World Cup and the plan to reduce it to a 10 team format.
Chris Gayle’s 215 for West Indies versus Zimbabwe was the stand out individual performance and made him the first batter to hit a double century in the World Cup.

Fig. 1: Tables showing the final standings for Pool A and Pool B 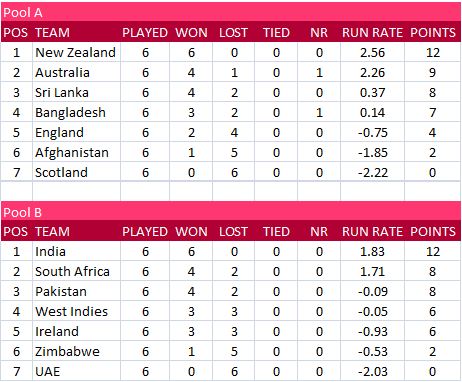 A closer analysis of our prediction

Though our predicted winners Australia progressed, it was their Kiwi co-hosts and popular under-dog that have stolen the show so far, recording a perfect 6-0 record. Notably this included an important victory over trans-Tasman neighbours Australia, which could give them a psychological edge should they meet again in the latter stages. While our Australia have slightly underperformed against our lofty prediction, our choice for outside tip in India has proven good thus far, with India winning every game and topping Pool B.
The prediction looks fair so far. Australia’s missed game against Bangladesh could have boosted Australia’s 2.26 run rate nearer to that of the 2.56 New Zealand recorded, given Bangladesh’s mixed performances to date, and their loss to New Zealand was close, with a margin of victory to the tune of just one wicket. Australia are unlikely to collapse like that again although they will have to be on top form to beat Kiwis at home in prospective all-hosts final. India recorded strong results from the off against Pakistan through to Zimbabwe last Saturday. Remarkably, as Figure 2 shows, India have lost only 27 wickets thus far, eight fewer than New Zealand. Their reliable batting has seen them lose a maximum of seven wickets in any fixture so far but has not stopped them hitting big tallies, with India scoring 300 or more runs against big teams such as Pakistan and South Africa.

Fig. 2: Chart showing the cumulative number of wickets lost at the end of the Group Stage for each of the teams who progressed 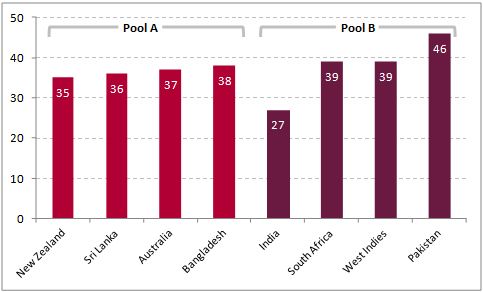 Has there been a benefit to winning the toss or batting first?

After the Group Stage (41 matches and not 42 because Australia-Bangladesh was abandoned as a result of bad playing conditions) are there any themes emerging in terms of winners? Historically it was a near certainty that the captain who won the toss would opt to bat first and with good reason. Historically grounds were looked after much less well, degraded quicker and as such were more difficult to bat on second. Indeed one of the founding fathers of cricket, W.G. Grace, once stated “When you win the toss – bat. If you are in doubt, think about it, then bat. If you have very big doubts, consult a colleague – then bat.” With most of the degrading pitch disadvantage neutralised, today it is argued a tactical advantage is gained by batting second, since the first team is forced to estimate how aggressively they should play to prevent the second team outscoring them, but still utilise their mix of 50 overs and 10 wickets. The propensity to lose a wicket increases with how attacking a team’s batting is since a batter has to decide between defending against a ball (and score no runs), playing a relatively safely for a single run or attacking the ball for a high scoring boundary. While the first team makes an informed guess the second team clearly operates with perfect information in this respect and hence their batters can tailor how attacking they are to the required run rate. Has any advantage been reflected in the results thus far? Teams appear to have recognised this advantage – on 23 occasions the team winning the toss chose to bat second – whilst the team won on 13 of those occasions. Teams winning the toss will not always opt to chase a target as it is can be disadvantageous to bat in the evening under floodlights and in less familiar atmospheric conditions. Of the 28 day/night games thus far the team batting second has lost on 18 occasions, just over 64%, while the team batting second lost only just 21% of the time in day matches, potentially reflecting the benefits of being able to tailor the style of play to target.

What are the factors behind so many high scoring games?

As has been noted in the media, this is a high scoring World Cup. The 2015 World Cup has seen the highest team innings of all time (Australia’s 417-6 against Afghanistan), the highest individual total in history (Chris Gayle’s feat mentioned earlier) and more centuries than any other Wold Cup. Quick analysis of day versus day/night games shows the 13 daytime fixtures saw average total runs of 494 versus 492 for games finishing in the evening – a negligible difference but undoubtedly high for both. Have specific types of teams typically recorded high scores, for instance do fixtures between similarly ranked teams lead to competitive, high scoring results? For two teams with a large disparity in ICC ranking we would expect a large variance of total scores and potentially a lower average combined runs score than for two similarly ranked teams, since the combined score should be high if the more capable team bats first (they would be expected to lose few wickets and score many boundaries) and low if the lesser team bats first (since one would predict they would lose all their wickets and score fewer with the overs they do receive). In Figure 3 we plotted the ranking difference versus scores, taking non-ICC ranked Scotland and the UAE as ranked 13 and 14 respectively.

Fig. 3: Scatter graph showing the combined runs score of a game by the difference in ranking between the teams 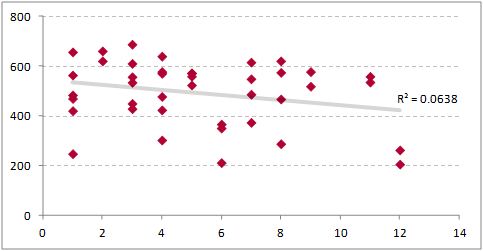 Unfortunately though there does appear to be the slightest correlation between a competitive game with two similarly ranked teams and a high scoring game, the R² value is very low and hence it cannot be relied upon. Given further time we would be keen to control for the ranking of the team that bats first – given a more capable team is likely to set a higher target and hence force the second, lower ranked team, to play more aggressively. Other areas for investigation might be the specific climate and ground size.

Batting second is a benefit – but not in the evening

Barring playing in the evening, our analysis of the World Cup results has suggested there may be a benefit to batting second. Other analysis also suggests this advantage is neutralised when playing on a ground that degrades heavily. Batting and bowling conditions are extremely important and the contact the ball makes with the floor and then the bat is very different in the evening or when the surface degrades.

So who do we think is going to win?

Given the high scoring nature of this World Cup and the generally attacking play that all teams are exhibiting, India’s performance so far and loss of only 27 wickets looks remarkable, comparing very favourably against New Zealand (35) and Australia (37), and will stand them in good stead in the latter stages. As well as India are playing, we will stick with our prediction that Australia will finish as champions, taking full advantage of playing at home and hitting top form in the knockout phase as they have done so many times in the past.