As the 2015 Cricket World Cup kicks off today there is one big question on the collective cricketing fan’s mind: Who will win the World Cup?

Being cricket fans ourselves, we decided to apply our analytics brains to this question. There are a plethora of approaches to predicting the outcome of sporting competitions – Paul the Octopus became notorious for predicting matches in the 2010 Football World Cup, while a Robot hailing from New Zealand has this week predicted Afghanistan will reign supreme in this Cricket World Cup. Afghanistan’s odds are currently 1000/1 so it could be early retirement for the Robot if that result comes in. In the absence of a suitable octopus or robot we will seek to employ our analytical tool kit in order to approach the conundrum.

We will seek to understand what has determined World Cup winners in the past and whether these factors are likely to impact the outcome of this tournament in order to establish our prediction. First though, we will establish who the favourite currently is by analysing the betting markets.

Fig. 1: Table showing the odds for each participating nation 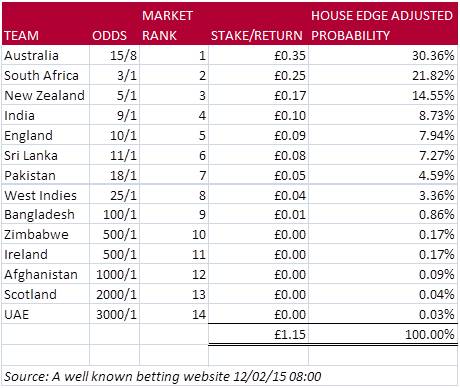 A bookmaker always seeks to incentivise bets in proportions such that the house makes a profit irrespective of the outcome, therefore the odds shown are clearly a function of the underlying probability that the bookmaker estimates a team has of winning – determined by form, home advantage, injuries and a host of other factors – combined with the current proportion of bets placed on each team.

Fig. 2: Chart showing the stake required for a return of £1 for each participant nation 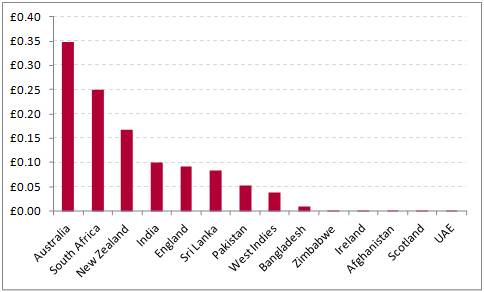 The bookmakers have Australia as favourites, with the shortest odds at 15/8. Assuming Australia was to win, one must stake £0.35 for a return of £1, as opposed to the Bangladesh who you would need to stake only £0.01 on. But to what extent are Australia the favourites? Unfortunately the odds and, by association, the stake required to return £1, are not directly representative of the probability a team will win. In a fair betting market the stake divided by the return would represent the probability a result would occur and as such the sum of all these would be equal to one. That is to say the probability of one of all the individual outcomes occurring is one. If we sum all of the stakes required to return a £1 (Figure 2) it returns a number greater than one – £1.15. If we were to treat these as probabilities this would imply that the probability of all outcomes happening is greater than one. The explanation of this quandary is the margin the betting companies apply to odds to turn a profit.

Fig. 3: Chart showing the decomposition of the stake, composed of the underlying probability and the Bookmarker’s margin

Here the margin is about 15%, shown in Figure 3. Put simply, the margin prevents you from betting on all outcomes and getting your money back on expectation – it is the house edge. In this instance you would have to bet £1.15, spread across the teams in the proportions listed, to win £1.
With a 30% probability of winning Australia are strong favourites, ahead of South Africa (22%) and New Zealand (14.5%). Controversially cricket-mad India are fourth (8.7%), with England and Sri Lanka just behind.

Comparing the Markets with the ICC ODI Rankings

Are Australia favourites because of their form or because they are a co-host? Figure 4 shows the ICC ODI rankings also place Australia top based on a graded weighting of their past four years of form. They have occupied that spot for nine of the last 12 months. This does not mean home advantage is any less of an important determinant though. Indeed second placed India were the top ranked team as recently as November and yet the co-hosts Kiwis, who are on imperious form, are considered almost twice as likely to win the tournament, despite being ranked sixth by the ICC.

Will Australia and New Zealand benefit from a big home advantage?

It is widely accepted that home advantage is important in cricket. While clearly there is an advantage to be gained from playing in front of your crowd, the weather is also a determinant of the way in which the ball behaves in the air and when it hits the ground – as bowling styles are adapted and pitches are adjusted by groundsmen to accentuate any advantage. How have the previous hosts of the World Cup fared? 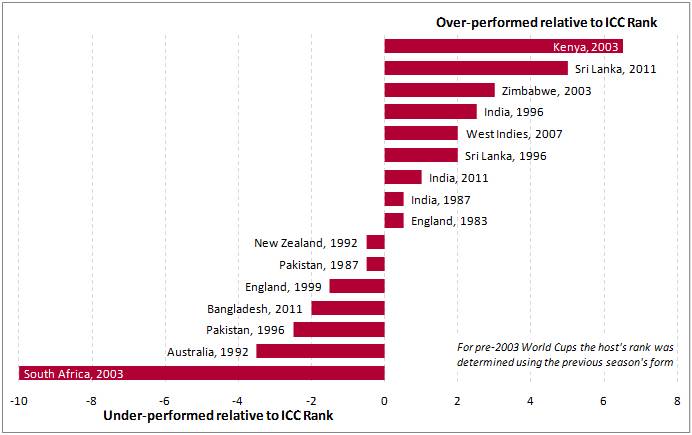 Unfortunately there does not appear to be a strong trend between being a host nation and performing better than expected. However, given it is widely acknowledged there is a home advantage in cricket it is likely this trend would emerge over a larger sample. Results are also distorted because multiple nations form coalitions to co-host the World Cup.

Are there any other indicators of potential performance? 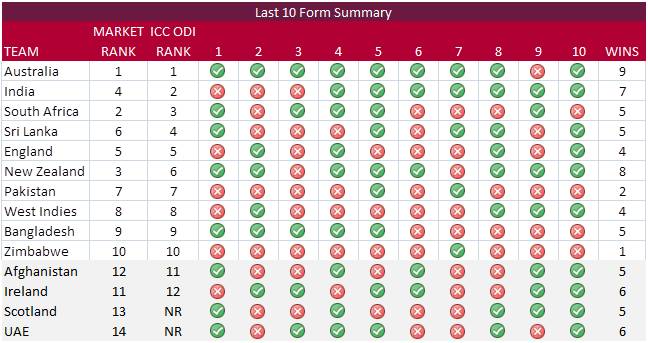 A look at the form reveals that Australia are on an eight game winning streak and are on top of the form charts. New Zealand are hot on their heels and the World Cup may be timed perfectly for them, if they can keep this run up. The results for Afghanistan, Ireland, Scotland and the UAE can be discounted to an extent as their opponents have included fewer Full ICC Member teams (the teams not shaded) and relatively more weaker teams such as Canada and Hong Kong.

The analysis shows that Australia are the top team in every metric. They are the nation of choice for the bookmakers, they are entering the World Cup on the back of an eight game winning streak and they possess the added benefit of playing at home, in front of their own fans and on pitches tended by their groundsmen. They also hold the most World Cups, with four in total, and have been ranked the top One Day International outfit for nine of the past 12 months.
The obvious underdog might be New Zealand, entering a World Cup they are co-hosting and on the back of eight wins in the last 10. However at 5/1 they appear overvalued to us and we suspect India – though hardly a traditional underdog – may be a better call at 9/1 as the current champions.