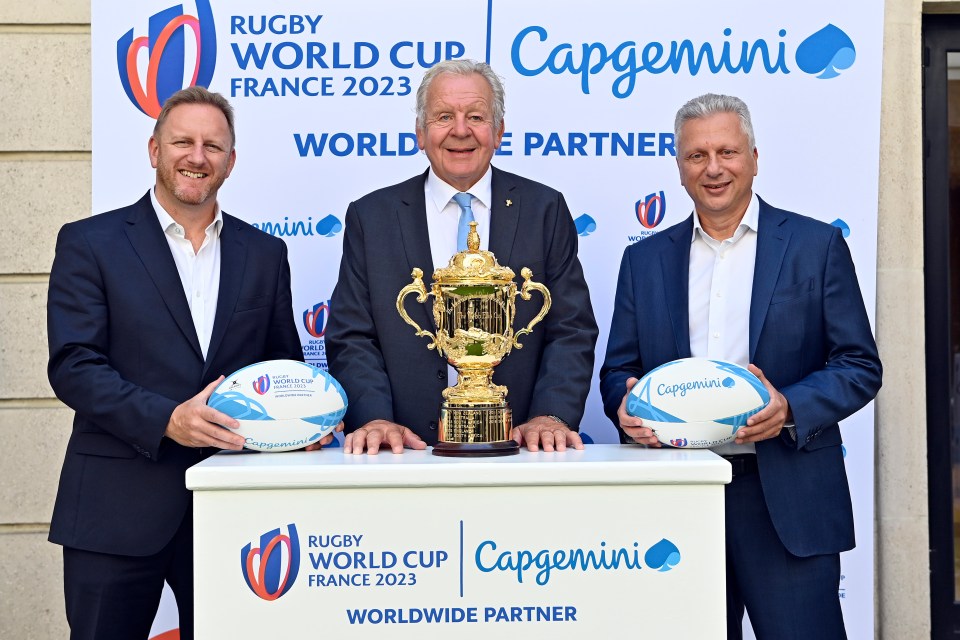 The worldwide partnership, that will help the growth of the sport across the globe, is a natural next chapter in Capgemini’s rugby story. Its deep heritage in the game began with the Group’s founder, the late Serge Kampf, who was a lifelong rugby fan and sponsor of the sport. More than 30 years ago Capgemini supported French domestic clubs and was Official Technology and Consulting sponsor for Rugby World Cup 2007 in France. Furthermore, Capgemini is currently the Global Innovation Partner for the HSBC World Rugby Sevens Series among other commitments. https://www.youtube.com/embed/GaJ-mYtLYmw?feature=oembed&enablejsapi=1&origin=https%3A%2F%2Fwww.capgemini.com

Rugby World Cup France 2023 is already capturing the imagination of fans around the world and is set to be the major attraction in the sporting calendar that year, bringing the rugby family and new fans together for a celebration of 200 years of the sport. Capgemini will work with France 2023 to enhance the tournament’s unforgettable moments on and off the field.

As a global company based in 50 countries, with well-established operations across major rugby heartlands such as England, Scotland, Wales, Ireland, France, and Italy and a growing footprint in Asia-Pacific markets that include passionate rugby nations such as Australia, New Zealand and Japan, as well as in Argentina, Capgemini will promote the tournament across all its international locations. This sponsorship embodies many of Capgemini’s core brand values, in particular team spirit and fun. With its diverse global fanbase, rugby is fully aligned with Capgemini’s conviction that it is through true diversity of thought and approach that the most innovative solutions are developed, and value is created.

Through its deep technology expertise, Capgemini will support the tournament’s management systems and play an instrumental role in the delivery of results including the men’s and women’s World Rugby Rankings. In addition, over the coming three years, Capgemini will work with World Rugby to enhance the digital experience for fans and coaches by applying its market-leading capabilities in data analysis, artificial intelligence (AI) and cloud.

World Rugby Chief Executive Alan Gilpin said: “We are delighted to be expanding our relationship with Capgemini and welcoming them as one of our six Worldwide Partners for Rugby World Cup 2023 in France.

“This partnership is much deeper than a brand association, this is a purpose-driven relationship between our two organizations that share many common values. It reflects our ambition to keep innovating and deepen our relationship with fans, enriching their experience by embracing new technology and digital platforms. Capgemini is the perfect partner to help us deliver this shared vision.

“With two years to go until France 2023 kicks off, we are in great shape. Preparations are on track. Our worldwide partner commercial program is attracting new partners like Capgemini and we are confident that it will be the most impactful and sustainable Rugby World Cup ever staged and a spectacular celebration of rugby and its values in the sport’s 200th year.”

Aiman Ezzat, Chief Executive Officer of Capgemini said: “At Capgemini we share the values of the rugby community; passion, team spirit and diversity are common key drivers for us both. I am thrilled that Capgemini will bring its deep expertise in innovation, digital and technology to enrich the experience of one of the major global sporting events of 2023. This new worldwide partnership reflects the international breadth and diversity of the Capgemini Group on the global stage.”

With World Rugby recently announcing its roadmap for the next five years, the international federation is experiencing record levels of interest for commercial partnerships across its properties. Capgemini has joined Societe Generale, Mastercard and Asahi at the top-tier level of Worldwide Partner for Rugby World Cup 2023.

On September 8, the global rugby family will celebrate two years to go before the first game of Rugby World Cup 2023 opposing the host nation France to New Zealand at the iconic Stade de France. One million tickets have already been sold to fans around the world, confirming the appeal of rugby’s biggest tournament.

Claude Atcher, France 2023 CEO said: “As the organizational model for international sporting events continues to evolve, the role of key strategic partners has never been more important. We look forward to working with Capgemini to optimize the technological services of France 2023, and in so doing contribute to the overall success and legacy of this Rugby World Cup.”

Capgemini is a global leader in partnering with companies to transform and manage their business by harnessing the power of technology. The Group is guided everyday by its purpose of unleashing human energy through technology for an inclusive and sustainable future. It is a responsible and diverse organization of 290,000 team members in nearly 50 countries. With its strong 50 year heritage and deep industry expertise, Capgemini is trusted by its clients to address the entire breadth of their business needs, from strategy and design to operations, fueled by the fast evolving and innovative world of cloud, data, AI, connectivity, software, digital engineering and platforms. The Group reported in 2020 global revenues of €16 billion.

Get The Future You Want | www.capgemini.com

Located in Dublin, Ireland, World Rugby’s purpose is to grow rugby by making it more relevant and accessible, with a vision of a global sport for all, true to its values. The driving force behind the sport’s significant growth has been World Rugby’s portfolio of major events, from the flagship men’s and women’s Rugby World Cups and U20 Championship, that celebrates the future stars of the sport, to the excitement of the men’s and women’s Rugby World Cup Sevens and HSBC World Rugby Sevens Series which are instrumental in attracting new fans.

The financial success of the men’s Rugby World Cup enables World Rugby to invest record sums in the development and growth of the sport from the playground to the podium, ensuring that the sport is as accessible and enjoyable for as many people as possible. Between 2020-23, the international federation will invest more than £565 million in the sport.

Rugby World Cup 2023 will take place in France from 8 September – 28 October with matches played in nine venues across 10 host cities. The tournament will be the 10th men’s Rugby World Cup and the second to be hosted by France after a memorable event in 2007.

RWC 2023 will take place in a year when the sport celebrates 200 years since Rugby School pupil William Webb Ellis was credited with inventing the game of rugby football by showing “a fine disregard for the rules” in catching the ball and running with it in 1823.

RWC 2023 will set new standards in social responsibility, inclusion and sustainability for a major rugby event, targeting four key pillars for the tournament’s legacy: acting for sustainability and circular economy, supporting education, training and employment, respecting and protecting the environment and promoting inclusivity by being a champion for gender equality.

The showpiece event in men’s rugby union 15s, Rugby World Cup 2023 will feature 20 teams – 12 of whom qualified directly by finishing in the top three in their pool at Japan 2019 and eight from a global qualification process – with 48 matches played across 51 days.

New Capgemini Report: Data is key to bridging the gap between net zero ambition and action