So far in our blog series on the DSO model, we’ve talked about how the nature of the UK power industry is changing (blog 1), about the challenges and solutions for the DSO role (blog 2), and about the benefits of a separated system operator (SO) (blog 3). In this blog, we take our discussion of a separated System Operator (SO) a little deeper into its objectives and define what this separation will actually look like.

The first objective should be to embrace the change in philosophy. The SO is no longer the sole controller of a single, directional system with few suppliers. It must coordinate with others to make the market, creating a flexible, competitive, and secure distribution system focused on delivering real value to consumers.

This will be achieved by promoting innovative solutions to demand/supply problems and opportunities, promoting optimum system use through the exploitation of smart/demand-side management and driving efficiency and competition through all areas of the system. The SO will therefore have to take the market lead in several areas:

There are four broad options for separation which the industry must consider:

To avoid any conflict of interest, legal separation is the most likely result, albeit through the interim step of accounting and functional separation over many years. It would be impossible for an SO to be owned by an AO as the conflict between the interests of asset ownership and the purpose of the SO to operate an efficient power market agnostic of capital solutions would remain. The journey to legal separation is likely to run to the timeline below:

How will the separated SO-AO model operate from 2022?

A previous paper developed a conceptual model for how the SO-AO commercial/contractual relationships might look: 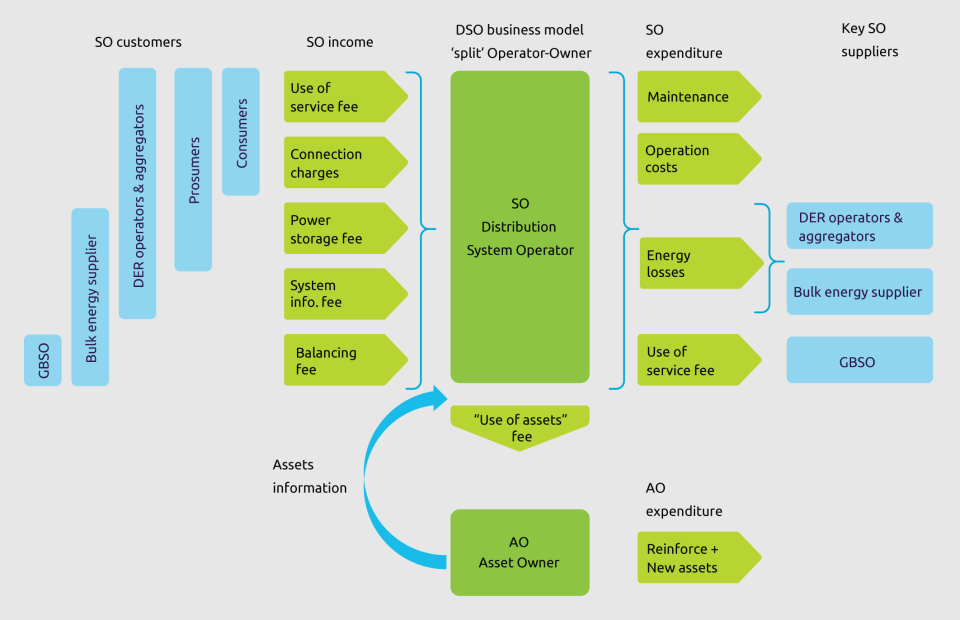 Implications for the regulator

The RIIO price-control mechanism will need to be fully reviewed with a view to providing a supporting framework in RIIO2, with the requirement to divide it across the SO and AO elements. There will need to be clear joint and several license obligations for both bodies – even prior to a split. In addition, Ofgem must provide an interim mechanism to enable existing DSOs to recover the costs associated with executing the legal separation to SO-AO.

While the SOs will be commercial and are likely to be privately owned or PLCs, they will need to be regulated in a way that ensures public accountability. This will likely require the SOs to create their own officially recognized body, or adapt the existing Energy Networks Association (ENA) model, to negotiate an efficient and proportionate regulatory framework with Ofgem and BEIS.

Any new regulatory regime would have to address the following areas:

Given the rapidly changing nature of energy distribution needs and the technology surrounding it, an eight-year regulatory cycle is not the most effective way to operate in the AO-SO world. Something more agile is called for, with regulations centering on whole-system efficiency to benefit the consumer.

The above would mean that RIIO2 will not be in the same form as RIIO1. Instead a more transitory model will bridge the gap between the end of RIIO1 and the end-state new regulatory world. This is not to abandon all the principles of RIIO, but it must be recognized that the new model will rely more upon market forces and open competition to support the overall system goals.

In the next blog, we will look at the commercial and operational side of DSOs. In the meanwhile, I would be happy to discuss the DSO model. Feel free to reach out to me via my profile or on social media.

2014 and 2020: the crisis years that triggered the transition of oil giants to carbon-neutral energies?
#EU

How DER can help utilities reach net zero
Show all