Artificial intelligence (AI), as defined by the Oxford Dictionary, is the “theory and development of computer systems able to perform tasks normally requiring human intelligence, such as visual perception, speech recognition, decision-making, and translation between languages.”

The media buzz around AI has always been limited to computer systems, software robots, and machines replacing humans – hence all the doomsday talk about robots taking over the world and making humans less relevant in the future workforce. However, based on Capgemini’s research and numerous client assignments, we can tell you that this picture is far from accurate. In the near future, AI will mean robots and humans working together to achieve better speed, and improved accuracy and quality. Far from being “artificial,” this intelligence would better be described as “augmented.”

Categories of automation and robotics

First, let’s get some basics straight. The diagram below provides a simplified view of the automation and robotics landscape. Depending on process complexity and input type – which can be unstructured, structured, patterned, or free form – we can divide robotics into four broad categories:

Some of the leading technology vendors in each category are listed below. Most fall into more than one category. For example, Openspan fits under both RDA and RPA. 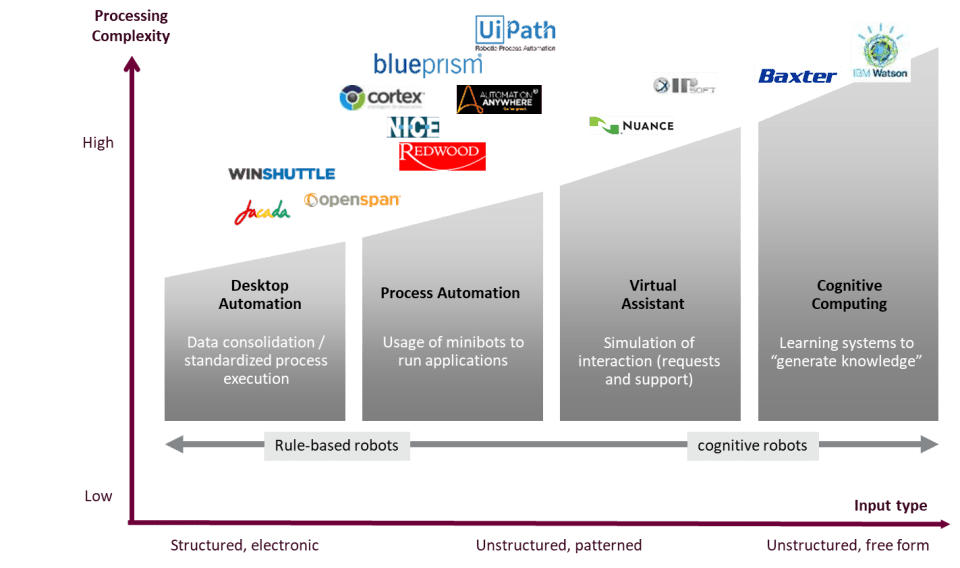 Many of our latest client engagements in the AI and robotics domain did not involve replacing human workers, but rather addressed how robots and humans can coexist to perform efficiently. We helped one large European organization make the day-to-day work of their customer service representatives more efficient and customer-centric by using robotics to pull data from various data sources to provide customer service agents with 360-view of the customer. We used robotic process automation (RPA) and machine learning technologies to partially automate a French insurance company’s customer service hotline. As a result, roughly 20% of incoming calls are now handled by the technologies, while the remaining 80% are handled by robots and human customer service agents working together.

In most client cases, it is not the underlying robotics technologies that are at play. The human aspect, which can involve anything from employee engagement, to organizational setup, to governing robots, is far more important. In order to alleviate fears of new technologies and encourage the innovative spirit of employees, change management efforts must focus on the deeper benefits of AI. That’s why I would propose that, in the near and medium term, AI stand not for artificial intelligence, but rather for augmented intelligence. After all, it’s not just about the technology. At the end of the day, it’s the human aspect that makes AI and robotics generate the most value for corporations around the world.

Do you feel otherwise? I’d love to hear your thoughts. Feel free to reach out to me on LinkedIn or Twitter and continue the discussion.

Seven easy to implement steps that should form part of the ethical development, deployment,...

Organizations need to develop a comprehensive ethical charter that can provide a code of...