Can I have an AI and two blockchains? That’s a joke, but people tend to confuse or misuse the terms. There is undoubtedly some hype around these terms. But is it warranted? In this post, we are going to talk about AI (Artificial Intelligence), what it is, and whether it can achieve what it promises.  We will do this while going through the cases presented at the AI Congress 2018. The AI Congress took place in the O2 in London on January 30–31, 2018 and brought together people from different industries to talk about AI and network. Its aim was to focus on how AI can be effectively monetized and the ever-growing opportunities for enterprises to take advantage of it.

So, what is AI? Some people think of the Terminator or other dystopic scenarios when talking about AI. Others think that AI is overrated. But what is it? It is said that Artificial Intelligence is applied when a machine mimics “cognitive” functions that humans associate with other human minds, such as “learning” and “problem solving.” 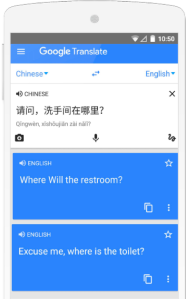 Google’s Melanie Warrick took the stand to ease people’s fear. She claimed that AI is not the destination but a tool to increase Return on Investment (ROI). A number of examples were presented, one of which stood out—specifically, Google’s translation capabilities a few years ago compared to its capabilities today. This used to be a phrase-based approach, i.e., mapping roughly equivalent words and phrases from a language to another without an understanding of linguistic structures. The new approach uses artificial neural networks trained on millions of existing translated documents from the web to learn vocabulary and look for patterns in a language. The results speak for themselves. Also, she mentioned Andrew Ng’s famous quote that AI is the new electricity. We can argue that this is true in the sense that electricity transformed the world we live and do business in today, and that AI will do so in a similar manner. In a few years, all businesses will use AI and they will probably wonder how they functioned before AI—similar to how we think about electricity today. Let’s not forget that 90% of the total data available today was created in the last two years!

Sue Daley, representing Tech UK, informed us about the developments at the World Economic Forum 2018 in Davos. Specifically, this was the first time that AI was a main topic of discussion at the World Economic Forum and people were positive about it and believed that will play an important role in the future. Google’s CEO was in Davos and took it even further to say that AI will be more important than fire or electricity.

Sue also presented an example where an AI system recognized faces in a video and predicted their age and mood. This could be used to assist people with visual impairments interact with the world more effectively.

Tim Hynes (CIO of Allied Irish banks) brought some thought-provoking statements to the table. In particular, advancements in quantum computing could enable us to train AI models that would be thousands of times faster than the fastest GPUs used today, as well as 5G technology for incredibly fast internet speeds, which will enable the autonomy of AI.

A case study presented by FeatureSpace claimed that collaborative filtering is a good technique for recommending products to people. It is based on the idea that people who bought or watched similar stuff to you will probably like other things you plan on buying or watching.  However, sometimes this does not work as intended. For example, in one case when buying a baseball bat, a balaclava was recommended.  This highlights the need to distinguish between people with different intents. This scenario was used as part of an example for a fraud-detecting system that builds a profile for every individual and enables more accurate fraud detection and avoidance of false positives.

Paul Mason stated that Innovate UK supports organizations’ growth and has helped many AI startups in London and the UK in general. Interestingly, it was mentioned that in the UK there is one AI startup every five days, which highlights the momentum AI has in the UK.

Starship technologies presented an autonomous, unmanned ground vehicle that drives on pavements for last-mile deliveries, i.e., from your local post office or grocery store to your house. The robot is able to carry up to 10 kgs (able to deliver groceries, food, and small parcels) and has many sensors to assist it in navigation. It uses machine learning and, in particular, deep learning to recognize pedestrians and cars. Admittedly, the safest city in the world in which this was run was Milton Kaynes and the most dangerous was London.

As one of the largest organizations in the world, the United Nations is also interested in AI. A UN representative said that this year was the first time two countries as well as the UN Secretary General mentioned AI in their talks. The UN has an office in the Hague that monitors developments in AI, focusing on the risks and benefits. An example given was that in the war in Iraq there were only a handful of unmanned aerial vehicles (UAVs), also known as drones, and now militaries have many.

In a different application, KPMG argued about the use of NLP and machine learning, and collaboration with subject-matter experts on understanding financial documents in order to fight financial crime.

Prowler.io talked about their decision-making engine in uncertain dynamic environments which relies on multi-agent systems, reinforcement learning, and probabilistic models. Deep neural networks do not typically work well with little data. On the other hand, probabilistic modelling could alleviate this problem by incorporating prior probability and belief.

IBM’s  Karolin Nakonz argued that 85% of people to business interactions will be with chatbots in the near future. Virtual agents are everywhere and they are becoming smarter, but there is a need to have a character for them to match the branding. For instance, a military chatbot for providing information about life in the US Army is given a soldier personality that interacts with people in a fun and appropriate way. However, if you were to use a chatbot in a hospital, this agent should have a different approach, as the settings is different and more sensitive.

Along these lines, there was the case of Babylon Health, an online doctor and consultation service provider, that can diagnose patients with the use of an intelligent chatbot. Babylon demonstrated how this technology works. The chatbot asks the patient a series of questions that adapt depending on user’s input to reach a diagnosis. If deemed necessary, the patient is asked to book an appointment with a GP over the internet.

AI could help healthcare in general and could be essential in the future. There is so much data available, mostly unstructured, but utilizing it could potentially save lives. Dr. Rebecca Pope (KPMG) once said that we could use AI not to replace doctors, but to enable them with the use of the powerful tool called AI. In practice, this could mean, for example, that an AI system prioritizes medical cases based on severity to potentially save lives.

So, is AI hype? Probably. But it seems that businesses see a significant benefit in utilizing it in their internal processes and their products. Increasing computing power, advancements in AI research and the enormous amounts of data generated indicate the AI will definitely play a crucial role in the future. Capgemini Insights and Data is able to provide AI capabilities to its clients. In particular, Capgemini has successfully applied AI to transform governments, consumer products, retail, distribution and transportation, energies, utilities and chemicals and financial services.

It is clear that enterprises not adopting AI will fall behind. In other words, in order to survive you need to adapt. Imagine when electricity started being used by businesses. Some were reluctant to embrace it. Adapting today means adopting AI as a paradigm that shifts how we traditionally do business. As we said, AI is a tool, rather than the destination, that could be used to automate difficult and complex tasks and help people make the right decisions. This means making decisions that will be most profitable for their business, but most importantly, beneficial to their customers. So, let’s embrace AI and contribute towards this paradigm shift.