Microsoft is putting a lot of effort in developing site types that look very attractive out of the box, have lots of graphics, and are responsive. Basically: sites that don’t look like SharePoint (or to be precise like the SharePoint we’ve known since 2001 up until the 2013 version). Looking at the SharePoint content presented at Microsoft Ignite 2017 this trend was obvious. A large chunk of those sessions was related to the two newest site types inside SharePoint: Communication Sites and Modern Team Sites.

This new direction is greatly supported by the exceptionally strong global SharePoint community, guided by the SharePoint Patterns & Practices (PnP) group. This open source initiative has produced valuable goodies like the PnP Partner Pack which offers (amongst several other things) powerful remote provisioning scenarios, and recently the SharePoint Framework (SPFx). SPFx is so successful is has now been formally adopted by Microsoft as the de facto standard for UI customizations.

SharePoint has so far been a Swiss army knife that could do almost anything, with every possible feature requiring different levels of configuration or even custom coding. It provided the basic plumbing, but the (hard) work to create a full set of compelling features that actually look good on screen was traditionally left for ISVs offering intranet-in-a-box solutions, or to consultancy firms creating custom intranets for mostly enterprise customers.

I’ve spoken to several Microsoft product managers that confirmed SharePoint is going to now eat a piece of that pie itself, by offering plenty of built-in features (news, search, surveys, and so on) requiring very little configuration and with lots of attention for how it looks on-screen. It will be very interesting to see how current 3rd party intranet-in-a-box solutions respond to this. Just basic intranet functionality and proper styling are not going to add enough value anymore. I expect that in the end only feature-rich products that offer a consistent experience across all kinds of site types and for all types of users (including editors!) will survive.

Microsoft’s new-found focus is in itself very positive: there is more to choose for organizations. What worries me though is the lack of attention for the severe limitations that these new site types—especially Communication Sites—still have at the time of writing. 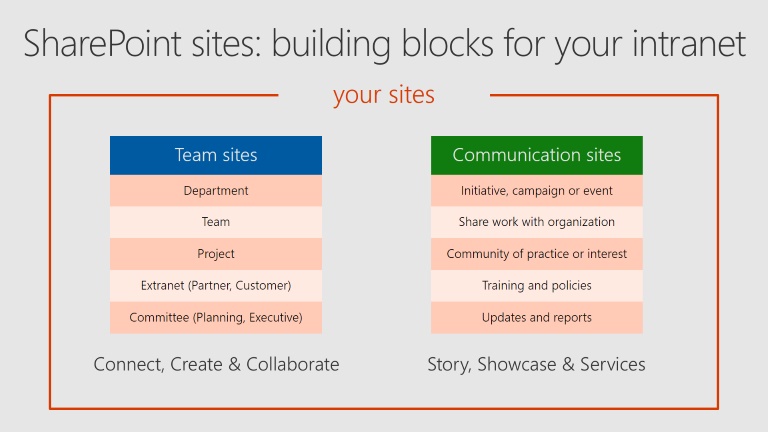 There is an almost complete lack of personalization options, or any other way to make these sites dynamic. They are just very, very static. It’s not that I mind looking at pretty things, but without any kind of interaction it will eventually get boring.

At the moment Communication Sites are mainly usable for storytelling or showcases, and you should use a regular team site or publishing site for anything with substantial functionality.
Worse still, while we await the arrival of the completely revamped SharePoint admin center (set to arrive early in 2018), the new site types are completely disconnected from the current admin interface. You cannot create the new site types from the admin pages. Also, even after you create a new modern site from the end user UI, it still doesn’t show up in the list of sites in the admin center.

This is something Microsoft could have handled better. As long as the new site types aren’t fully embedded in the admin functionality, they are basically degraded to beta/preview functionality that is not usable for Production scenarios. Which is a shame, because they look great! 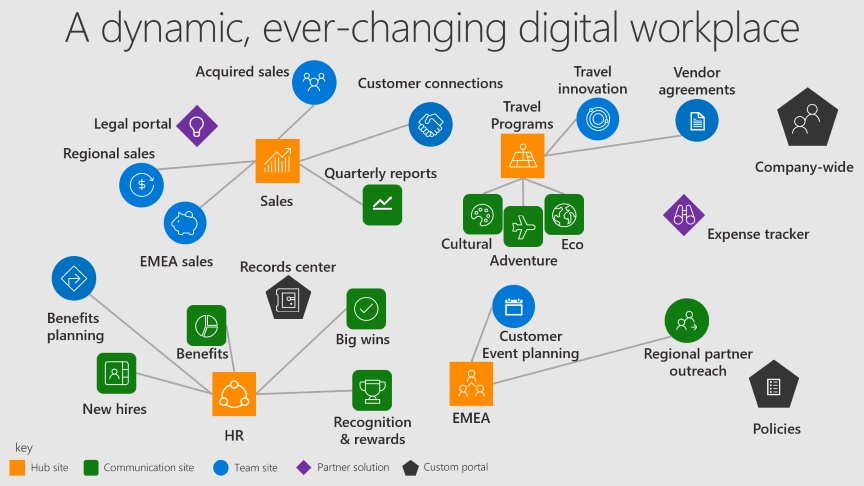 I’ve spoken to several customers who expected that the improved look and feel was something they were getting on top of the classic team sites functionality. Instead of form follows function they are hoping for function and form to go hand in hand. That is not the case yet, these are very distinct branches on the SharePoint site type tree. The modern sites have a clear focus on form, the classic site types on function.

Once all site types are connected though, they will become the building blocks for an enhanced intranet where you select the appropriate site type depending on the goal of your sites.

Now I would very much be selling Microsoft short if I said there were no other developments outside the new site types. The SharePoint and OneDrive landscape as a whole is on the move. The pace at which features have been added over the last two or three years is just staggering. Below are the most important announcements made during Microsoft Ignite 2017. And I have doubt that all of these improvements will eventually also apply to the stylish modern site types:

To stay up-to-date with the latest news about SharePoint and OneDrive, keep an eye on Microsoft’s SharePoint Blog that’s part of the larger Tech Community site.
For more about Microsoft Ignite 2017 take a look at my earlier blog post.

Will you move to the cloud and dare to be different!

How to be different in the cloud
Azure

Musical chairs with the hyperscalers

Bryan Adams had the luxury to sing “Yeah, we can watch the world go by, up on cloud number...

Musical chairs with the hyperscalers
Industry 4.0

The renewable enterprise: servitization in manufacturing with SAP and Microsoft

Servitization in manufacturing
Show all