In rapidly changing business, an IT organization has to align the IT strategy to business strategy and bring agility into the IT delivery. It is increasingly difficult to manage complex IT infrastructure dependencies, and manual intervention becomes unavoidable. Time and again, organizations consider management of non-production environments a secondary priority. This leads to unorganized and ad-hoc management of test environments and increased operational and maintenance costs for organizations. In addition, identifying and addressing environment-related defects becomes a major concern for QA teams. Effective and efficient management of test environments with structured automation can deliver significant benefits along with substantial cost savings to the organization.

Typically, release management is a complex and time consuming process. Even if applications are provisioned using templates, the infrastructure provisioning is often done manually. In a complex DevOps continuous integration environment requiring reduced cycle time for delivering and testing enterprise applications in DevOps methodology, the manual provisioning of environments is not sustainable. Adopting best practices and leveraging automation can drastically improve the cycle time and reduce the time to release without impacting compliance and standards. 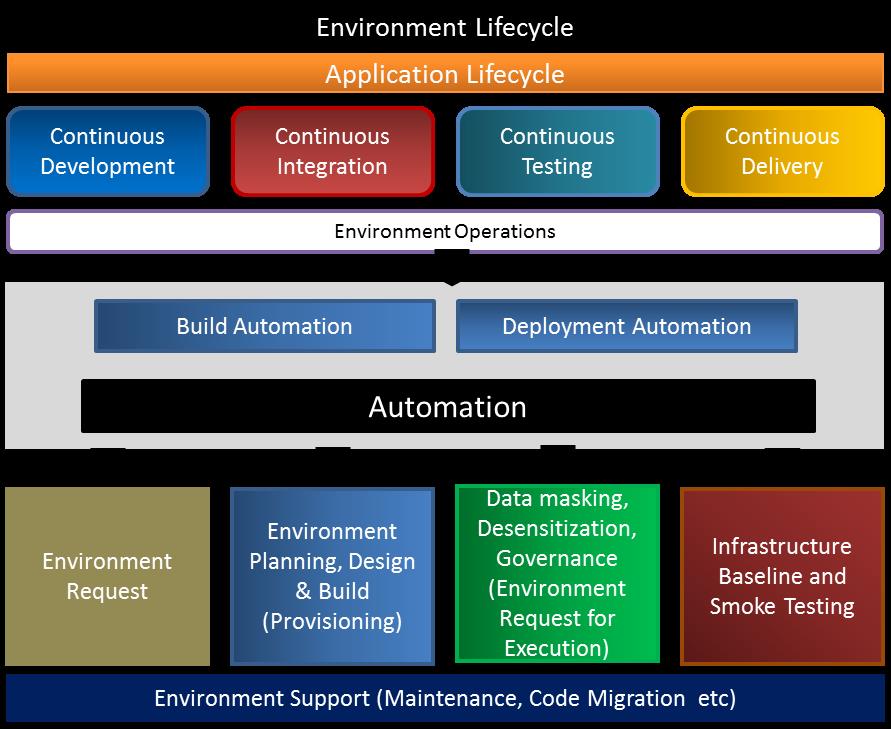 3.      Proactive monitoring of environment and self-healing for repeat incidents

4.      Configuration management with auto-discovery for environment asset management and licensing

5.      Patching and upgrading of infrastructure components compliant with enterprise policies

The approach to test environment automation varies across organizations. Common elements of this approach include a combination of pre-configured tools and scripts supporting the entire environment management lifecycle. Once the initial standardization is done, all the inputs, outputs, check points, and failure points in the tasks identified are captured. All the captured items are marked as candidates for local or centralized automation.

A robust automation script or workflow would lead to the reusability of the scripts that could be used in the future to speed up the provisioning process.

The benefits of test environment automation cover the range cited below:

Key metrics to be considered for support and management of test environments during release management fall into three main categories:

Some of the commercial tools in test environment automation area include the following:

Chef: Chef is a configuration management tool used to streamline the task of configuring and maintaining a company’s servers, and can integrate with cloud-based platforms such as Rackspace, Internap, Amazon EC2, Google Cloud Platform, OpenStack, SoftLayer, and Microsoft Azure to automatically provision and configure new machines.

SmartFrog: SmartFrog is an open-source software framework, written in Java, which manages the configuration, deployment, and coordination of a software system broken into components. These components may be distributed across several network hosts.

SSH: Secure Shell, or SSH, is a cryptographic (encrypted) network protocol for initiating text-based shell sessions on remote machines in a secure way. SSH provides administrators with a secure way to access a remote computer for the launch of an instance to test a project version. SSH protocol is widely used in test environment automation.

If development and test environments live inside a virtual machine (VM), then launching a project version will need SSH authentication keys. Recreating the editor and command line sessions every time you develop and test is a waste of time. A terminal multiplexer allows you to create persistent development sessions running multiple commands in different panes once the SSH key are supplied.

Puppet: Puppet is an open source configuration management utility. It runs on many Unix-like systems as well as on Microsoft Windows, and includes its own declarative language to describe system configuration.

ServiceNow: ServiceNow is a platform-as-a-service (PaaS) provider of Service Management (SM) software for the entire enterprise. ServiceNow specializes in IT service management (ITSM) applications based on the ITIL standards.

Scaling up the as-a-service model

A business-process-as-a-service is a tool – a much smarter and more versatile tool than a...

Scaling up the as-a-service model
automation

HOW TO UNLOCK THE TRUE VALUE OF MARKETING AUTOMATION

THE MARKETING OPPORTUNITIES RISING FROM DIGITALIZATION

HOW TO UNLOCK THE TRUE VALUE OF MARKETING AUTOMATION
Show all