Storytelling is a powerful way to communicate a message. So did you already tried this out in an Agile transformation? I did! and I like to share my story with you. This story gives people and organizations insight in the fixed patterns they live in regarding to the time consuming control processes around IT projects and that it is possible to do things differently with a positive result. 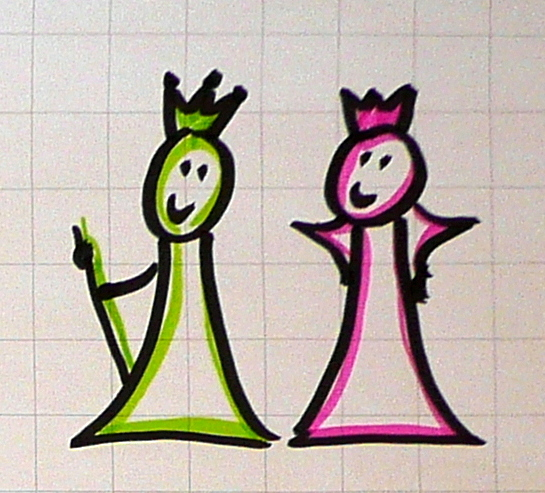 Once upon a time a group of eight princes and one princess lived in a beautiful castle in Middle earth. They worked hard for the king of the castle to make the castle more beautiful than it already was. They had a long list of jobs to do and were very eager to start them up. But for each job they had to write a plan, follow a procedure and ask approval of 4 different departments of the castle. When they were quick it took them 3 months before they could even start with their job. They were not happy with it.

One day the king received a letter from the king of Upper earth, who was close by and wanted to visit him. The king panicked because his dining room was not good enough to have dinner with this important relation. It definitely needed an upgrade. He called the princes and the princess and asked them to upgrade the dinner room within one week. “But that is impossible!” said all princes at the same time. “Why is that impossible?”, asked the king, “do you need more money?” “No”, the princess said, “but when we have to make the plan and follow the procedure than it will take us 3 months before we can start”. “Nonsense” shouted the king, “just start and make sure you finish it before the end of the week”.  “But then we have a problem with all 4 departments, which have to approve your request” said the princess. “Send them to me”, said the king.

The next day the head of the secretary came to the king and complained about the princes and princess. “King”, he said, “it is awful, I see all kind of activities in the dining room which I don’t know about, and when I asked the princes for the plan they say go to the king”. “So what is the problem?” Asked the king. “Well because there is no plan, they end up with a mess. Some are painting the walls, while the new carpet is already on the floor and they removed one door, but that door was an emergency exit. Our head of security is very angry about this” said the head of the secretary. “Ok”, said the king, “now I understand why we need a plan, but we don’t have time to follow the full procedure”. “Can we think about something else, something quick? I have an idea, can we bring the 4 departments and the princes and princess together in one room and let them agree upon a plan in 1 day?”.  “Well let’s give it a try”, said the head of the secretary. And so they did the next day.

The king made a drawing of his ideal dining room, all departments gave their requirements, they prioritized them together and at the end of the day a rough plan of the upgrade, good enough to start with,  was on the wall. Everybody was satisfied and the princes and princess could start with upgrading the dining room according to the plan. They agreed that at the end of each day they all meet each other in the dining room to see progress, discuss impediments and re-prioritize the requirements if needed. The king was happy to see his dining room transforming step by step to its final state. When he wanted to change something then they discussed it together and decided if there was enough time to do it or to skip another requirement. At the end of the week the dining room was ready with everything in it except the crystal lamp. But the king thought that the lamp was not the most important thing and he was very satisfied about the results. The next day he was very proud having dinner with the king of Upper earth in his new dining room and after this diner, many diners followed with all kind of highly respected and important people.

And the princes and princess? From that day they could start with new jobs for the king within a few days instead of 3 months. They called their new way of working “Agile” and they lived a long and happy life at the castle.

Do you want to read previous articles about the transition to Agile?

See Transition to Agile Part 4 – the relation with the projectmanager