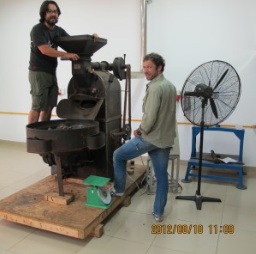 In today’s world of innovation, creative diasporas are everywhere. I saw one of the best examples of how the entrepreneurial spirit drives them in Ho Chi Minh City, Vietnam. Vincent Mourou and Samuel Maruta, two French entrepreneurs based in the Vietnamese city for several years, don’t make mobile phones or disruptive apps. They make chocolate. These chocolatiers have succeeded with gusto, in the sense of the word’s use in music: what is pleasing to hear … and to taste.

Disclaimer: in order to maintain transparency, I need to confess to being an inveterate chocoholic. Not only did I immediately love their product, but I also received several free bars as gifts (to go along with the others I bought).

Their story makes a great case study. Tired of their jobs, Morou and Maruta began talking to their friends about their desire to do something else with their lives. A friend of theirs, an agricultural engineer, told them about Vietnam’s vast amounts of cocoa trees. The two decided to go see for themselves. On motorcycles.

“Now what?” they asked themselves after their first visit. So they started grinding the beans. “Without even realizing it, we were making chocolate,” they say.

Their only real “technological innovation” was to turn an Indian lentil-grinding machine into a cocoa mill. Recall that, Jean-Baptiste Say, the inventor of the term ‘entrepreneur’ said that the entrepreneur deploys resources to use them most efficiently, while Joseph Schumpeter defined innovation as a “new combination.” The chocolate company fits both definitions. 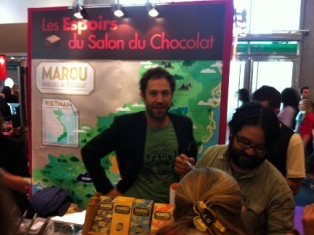 Morou has a background in advertising, so he knew that successful entrepreneurship needed a story, product and packaging. You’re reading that story right now. As I said, they make good chocolate – it placed among the “espoirs du Salon du Chocolat” (where I met them a second time) this month in Paris. Their packaging is well designed, a paper shell that opens out from the top – finally! Unlike the competition’s bars, which are divided into rectangles, theirs are divided into triangles. A “Steve Jobs of chocolate” couldn’t have done better.

Their greatest innovation, though, is their new life, the passion they bring to it and the way they had to restructure it in order to succeed. They’re not much different from Nandu Madhava and Vir Kashyap, both children of Indian emigrants who returned to India and launched start-ups in Bangalore, across the world from their student roots on the US east coast. This is only one example of the many young ex-pats I’ve met who have created another life abroad, contributing their creativity – whether artistic, technological or entrepreneurial – to their adopted homes.

Richard Florida, an American professor teaching in Toronto, formulated the concept of the creative class – a class that includes all knowledge workers, from doctors and lawyers to teachers. The class core ranges from engineers to artists and media professionals. According to Florida, they try to “solve problems as well as find them,” which is why they play such a large role in innovation.

Members of this class tend to travel more than others, as well as move. This is why I’m focusing on “creative diasporas” that are helping to change the world.

I’ll follow up with more examples of people like this, and some thoughts on their role in the innovation process.

False positives in web application security – take up the challenge!
Show all