I’m writing this in Ho Chi Minh City. I just got here, the next step on my trip around the world of innovation. From here, I’ll go to Singapore, Manilla, Hong Kong, Shanghai, Beijing, Seoul, Tokyo, San Francisco and New York. The big trip. 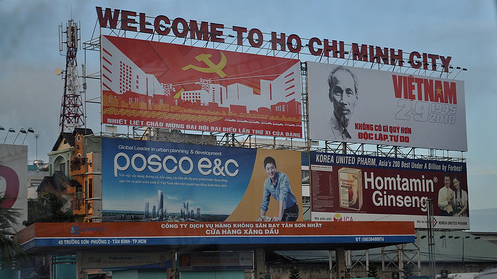 This is also also where I became a journalist, entirely by accident.

It was 1968; I was teaching French in Tokyo. I figured I should take advantage of being in Asia to get a real idea of what was happening in Vietnam, the war that marked my generation. I thought it was simple curiosity, but it was the beginning of a theme that would guide my life.

I got there a few days before the beginning of the Tet Offensive, the war’s turning point. The day before I had met with  François Pelou, bureau director at the Agence France-Presse, and he told me everything he’d seen. The next night I was awakened by B-52 bombings – which literally shook the earth – and by automatic-rifle fire; I called the agency where Pelou was, of course, hard at work.

“The Vietcong are attacking throughout the country,” he said. “The Americans are having a hard time containing them. The airport is closed.”

Instead of staying stuck in my  hotel room, I offered my services. Pelou didn’t have anyone in Saigon so he told me to meet him there. My first report was the attack on the presidential palace. It was also the first time I’ve been shot at. An excellent way to start a journalistic career.

I realized tonight that it’s the same thing that drives me from question to question, which drives this tour of the world and right now is taking me back to my roots. After spending 15 years in the San Francisco Bay Area, I started to wonder if innovation was about to start coming places outside of Silicon Valley. Without a real response to that question, I decided to go see for myself. That’s the theme: investigate something that seems crucial. Then report on it.

Moment of truth? This trip will give me an idea of how well-founded my hypothesis is, that innovation will soon be “distributed.”

It’s clear that we’ve seen in the last few months that innovation is happening everywhere, but it takes time to develop, and there’s no denying that Silicon Valley still plays a central role, is the place where the most audacious futures are conceived. So I find myself a bit uncertain of my overall project, and that’s the best reason there could be to search even further during each of my steps through Asia.

Are you with me?