I was recently asked to talk about how innovation has changed journalism, which turned into an experiment in tweeting my own presentation with no visual support besides my Twitter page. This took place at the end of June as part of the 4M Conference (Montpellier, Mediterranean, Media, Mutations) organized by Canal France International.

It was sort of a high-wire act, because even  the morning of the presentation I had no idea how to tweet while giving a speech so that the tweets appeared in real-time. Damian Van Achter (@davanac) showed me what to do at breakfast: switch to the Twitter for Mac app (I usually use Hootsuite). It lets you prepare tweets that then stay on-screen until you want to send them.

The first exercise: turn my presentation into 29 tweets of about 120 characters, so they could be easily retweeted. It really was a good way of synthesizing my presentation. Twenty-nine tweets seemed like the maximum you’d for a 25 minute presentation. (Nicolas Loubet’s version on Storify – in French).

My tweets were my presentation. They were projected on the wall behind me by Simon Decreuze (@cuisineanxious) of l’Atelier des médias (RFI).

The New York Times’ Amy O’Leary did something similar in Boston a month before me. But it was slightly different: she gave her tweets to her friends before the event, and they were the ones tweeting them as she spoke.

Two days after I spoke at Columbia’s Fundación Nuevo Periodismo Iberoamericano de Cartagène – where I sometimes run workshops –  it posted a series called “Journalism in 15 tweets” (in Spanish) which was created by my El País colleague, Miguel-Angel Bastenier. It’s a series of well-turned aphorisms, all of them between 137 and 140 characters, which make them difficult to retweet.

I found tools to tweet presentations in KeyNote and PowerPoint. These tools go back to 2009, but I haven’t seen any examples of any presentation that was exclusively in tweet form. If anyone could point out where it’s been done, that’d be great!

Is it worth it?

On the negative side, tweeting tripped me up several times. My friend Eric Scherer (@ericscherer) said he was sorry it happened happened, but stumbling is unavoidable in an experiment.  What I get from his response is that I should keep trying this, and make it better. 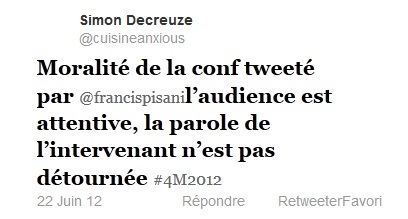 “The lesson from @francispisani’s tweeted presentation: the audience pays attention and isn’t distracted from the speaker’s words.

I want to clarify the second point : it’s not a question of “control.” Everyone was free to do what they wished. I wanted to augment my presentation with a tweeted information feed, a substantially different approach.

As far as people paying attention – a lot of that came from the surprise factor. Which doesn’t last. And I’ll be the first to admit that this was gimmicky. Maybe we’ll start seeing more tweet presentations – at first, the audience will be interested, but it’ll be done so much people will get tired of it.

You need good content, but you can’t ignore the format. And the format is easier to change.

My first published criticism of PowerPoint presentations was run by  El País in 1999. Since then, we’ve moved towards less text and more images, which are often amusing but not always meaningful. We’ve moved towards storytelling, which is a good thing for speakers. I’ve tried MindMap presentations – concept maps – using  TheBrain. The big trick, the risky trick, is creating the map as you’re speaking, so the audience can watch your thoughts develop while retaining a good overview. And thus was born the tweet presentation.

I wonder what the next new format will be, and am curious to know what this inspires in you – criticism, or ideas.