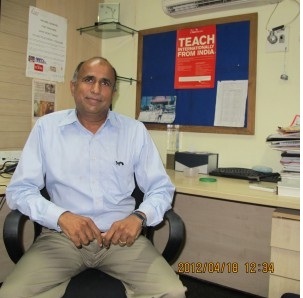 Ganesh Krishnan is the founder of one of India’s first call centers. One day, he saw a cartoon in an American newspaper: in it, a father is saying to his daughter, “No, you can’t outsource your homework to India.” Krishnan hung the cartoon on his office wall. Eventually, he thought, “Why not?” And that’s how TutorVista was born.

His interest piqued, Krishnan researched the area, talking to parents and professors in the U.S. and India. He realized there was an enormous opportunity.

“The U.S. has a record number of Nobel Prizes and patents,” Krishnan says in his Bangolore office. “They have the best universities in the world, but their schools are in crisis. Politicians want to raise the level of education. The professors are good, but there’s something that’s not working.”

His response: create a distance-tutoring system that matches students (mostly American) with professors (mostly Indian) for help with homework and test prep.

“The difficulty  wasn’t with putting together curriculums, but with teaching methods,” Krishnan says. In Asia, teaching is mainly done through memorization, and in the U.S. it’s done by example.” So you need to train tutors – today the site has more than 2,000, all certified teachers. They receive 3 weeks (60 hours) of distance training, learning the platform their students will use.

The platform itself is complex, and took two years to develop. “It has all the university disciplines,” Krishnan says. From the web portal to the appointment system, “50 people work on it full time. If the site shuts down, it’s like a university closing down.”

Students connect when they want, study whatever subject they want. They can either make an appointment with specific tutors (which 60% do) or get instant help from whichever tutors are currently online. There are an average of 20,000 students online at any moment.

TutorVista is not a charity. It’s a “virtual education company,” Krishnan says. So it needs a good business model. The risk was that, instead of charging by the minute, the company chose a subscription model ($100 a month for unlimited, 24/7 service). Individualized classes run from $40 to $60 an hour. With this, the company became the largest distance-tutoring company, and led it to launch SmartThinking, offering the same services at the university level.

Krishnan sees online tutoring as an opportunity enabled by globalization and information technologies. His company’s success is aided by India’s strong reputation in math and its large number of English speakers. In 2011, Pearson, the largest education company in the world, acquired 77% of TutorVista. “It gave them access to the Indian market, which is great for them,” Krishnan says. “And the partnership gives me access to the entire globe.”

Becoming a game-changing product of your environment

How a product-based DevOps approach can radically transform your business

Becoming a game-changing product of your environment
Show all