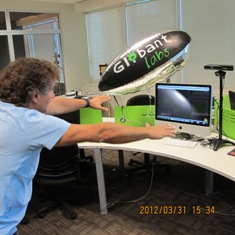 The markets are in the north, the talent in the south, and the technology is everywhere. This is the formula that Globant, an Argentinian enterprise-software company, built its strategy on. And it works. Created in 2002 with $5,000 (3,800 Euros), it now employs 2,500 people, has four offices in the U.S., one in the U.K., and 20 in Latin America. Among its long lists of clients it counts some of the most innovative: From Google to Electronic Arts, LinkedIn and Zynga.

The formula: 90% of the company’s revenue originates comes from the north, while 80% of its technological and artistic development happens in the south. “The big markets are short on talent, while there is a lot of it in relatively small cities, in unexpected places where no one’s thinking about giving them an opportunity,” says Guibert Englebienne, director of business technology at the company’s Buenos Aires office.

The talents that interest Englebienne  are designers and developers. He uses this combination, indispensable for innovating today, in a context of open innovation in order to avoid falling into B2B’s biggest trap: gearing itself towards captive contract enterprise users (bank clients, for example), which leads companies to create less robust software.

“The new generation is more autonomous; they’re as likely to produce as they are to consume. They belong to open global communities and have access to the best technology,”  Englebienne says. “Most companies consider them a challenge. We tell our clients to pursue them.”

“All of my employees want to have a hand in creating,”  Englebienne says. When a client has a problem, the company creates a list for interested employees to sign up on. Several brainstorming sessions (always in English) are held, to better “hear the intelligence spread throughout the organization.”

“We’re in the business of fitness, of conditioning,” he adds. “We allow our clients, employees and the countries we operate in to always be ready to compete in the areas that are building the future.” He believes that the world is flatter, in the sense that it’s more open, and that “needs are so big that we must take advantage of the innovation happening everywhere, without outsourcing being a sign of bad quality.”

The challenge is having access to a sufficient amount of talent to operate at a  global level. In Argentina, like everywhere else, education is at least five years behind. Thus the company’s constant training initiatives and the company’s “Globant Labs,” which researches futurist projects like robotics, biotech, augmented reality and gaming.

Globant isn’t interested in southern markets. “Ninety percent of the global demand for digital services come from the U.S., U.K. and Japan. We’d be wasting time in other places,”  Englebienne says. “The markets that interest us are those where corruption is gone, that are built on a clear meritocracy, and where decision-making is fast.” But when asked if he’s considering creating an office in New York, he says, “Not necessarily. The cultural component is very important for companies and for people. You need to constantly work on it. We make sure we’re always close to our employees, and always  near a plane.” He says the world is flat, but the way he works implies that it’s not homogenous.